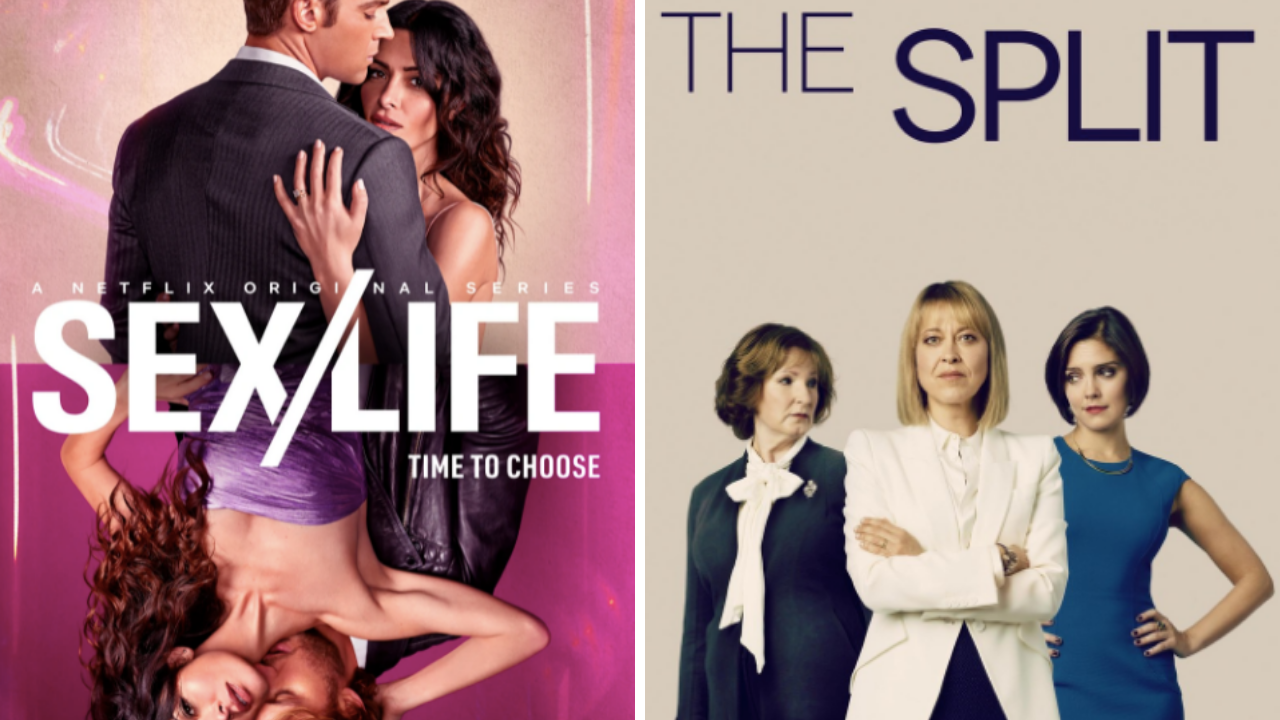 Female showrunners are rising, but not always rising together.

The plot thickens when Billie leaves her laptop open and Cooper reads her unfiltered sexcapades, which blows up their “perfect” relationship. In the middle of Billie’s fantasies about sex with her ex, Sasha unexpectedly introduces Brad back into Billie’s life, which causes all kinds of deliciously watchable chaos. Sex/Life is a higher-end romance novel/Lifetime ladies movie of the week stretched out into a series with a stunningly beautiful cast of actors, deliciously hot sex scenes, a shower scene with full-frontal male nudity, and a polyamorous suburban sex party thrown in for good measure. (Perfect eye candy for us uncoupled folks who have spent the last 18 months quarantined while single.) Sex/Life unapologetically wrestles with motherhood, marriage, sensuality, pleasure, and sexual liberation in a series with total cishet female creative control.

The Split is set in a dynamic legal drama set in London about a family of cishet female divorce lawyers. Hannah (Nicola Walker) is the rockstar divorce lawyer/grounded eldest sister/second Mom to her two younger sisters and the biological mother of three who, at 18, wed Nathan (Stephen Mangan), who is also a divorce lawyer. Hannah recently left the prestigious family law firm of her single mother Ruth (Deborah Findlay), where her reckless middle sister Nina (Annabel Scholey) is still employed. Hannah has been enticed by her tall blonde and handsome Dutch High School crush Christie (Barry Atsma) to join the even more prestigious London family law firm where he is a partner. After 20 years apart, Christie is still smitten by Hannah’s brilliance, and the entire situation is complicated by the return of Hannah’s estranged father who fell in love with the family’s nanny 25 years ago leaving his wife and kids for the younger woman (who the audience discovers is Black in the last episode of Season 1). Hannah contemplates monogamy, trying not to be like her father while wondering if choosing Nathan over Christie was a mistake she can remedy in order to find her own authentic happiness. The Split is British drama at its best — phenomenal writing, multi-generational storytelling, and grounded actors with impeccable comic timing. It’s lovely seeing women in their 40s, 50s, 60s, and 70s with wrinkles and curves looking fabulous while having fully nuanced sexual relationships.

Both series caught my eye because of their female showrunners and majority female writers’ rooms. Sex/Life attacks marriage about 4-6 years in. On paper, Billie has hit the nuclear family lottery. She married well, is living the American dream, and has lost all her baby weight.  What more can an American white girl ask for? Mind-blowing sex.

In The Split, 40-something Hannah is at the top of her profession. She’s the emotional foundation of the entire family, has the work-life balance down pat, and owns a stunning home in an affluent London neighborhood with the status of a successful husband. What more can a British white girl ask for? Mind-blowing sex.

Sex/Life performs diversity with Billie’s simultaneously flawed and fabulous best friend, Sasha. Rukeyser seamlessly conforms to the stereotype of the sassy Black female sidekick. Where Billie’s uninhibited sexuality plays as liberating, Sasha’s uninhibited sexuality comes off as objectifying because her character is one-dimensional. We are told nothing about who Sasha is other than being Billie’s bestie. Black and sassy, Sasha pops out lines like, “I don’t wanna be that basic bitch who tells you to be a good wifey.” Rukeyser does give the Sasha character cache through socio-economic class and education. Sasha is a brilliant psychotherapist, a college professor, and a published best-selling author. But in a speech during her book launch, Sasha equates the challenges of being Black to the challenges of being a woman and minimizes her Blackness. Really ya’ll? When Billie needs a babysitter or anything, Sasha snaps into 21st-century mammy mode. She even shows up in Connecticut in a heartbeat to babysit without question. On top of it all, Sasha is a horrible friend who gives terrible unsolicited advice.

Across the pond, it’s kinda worse. Hannah and her sisters have no Black female friends and the Black female supporting characters are one-dimensional. In Season 1, there’s Jaynie (Tamara Lawrence), Hanna’s wealthy client, who is a young cancer survivor pitifully fighting her white ex-husband for their fertilized eggs, and Maya (Josette Simon), who is the nanny Hannah’s dad ran away with. The writers miss the mark with both characters. Maya is in two scenes and never speaks — she’s basically a walking prop. Season 2 gives us Chloe (Amaka Okafor), a law student who works for Hannah’s husband Nathan, says a few social justice-ish lines while following Nathan around complimenting him for six episodes while wearing the same costume.

Representation matters, but it’s not enough to just cast Black women in shallow supporting roles. Why is it that some white women with storytelling power seem to be just as narrow-minded and lazy as the patriarchy they fight against when it comes to writing Black women? Black women showrunners like Shonda Rimes are able to write white women like Meredith Grey (Ellen Pompeo) of Grey’s Anatomy who are in complex relationships with Black women like Miranda Bailey (Chandra Wilson) as fully compelling people with nuance. Rimes’s writers’ room is like the UN, and the show has been on for 17 seasons, has won countless awards, and is still relevant with phenomenal ratings.

As white women rise to gatekeeping positions of power, it would serve the stories they tell to welcome Black women writers into their writers’ rooms to shine with full autonomy. Superficial multicultural casting is not enough. Seriously.