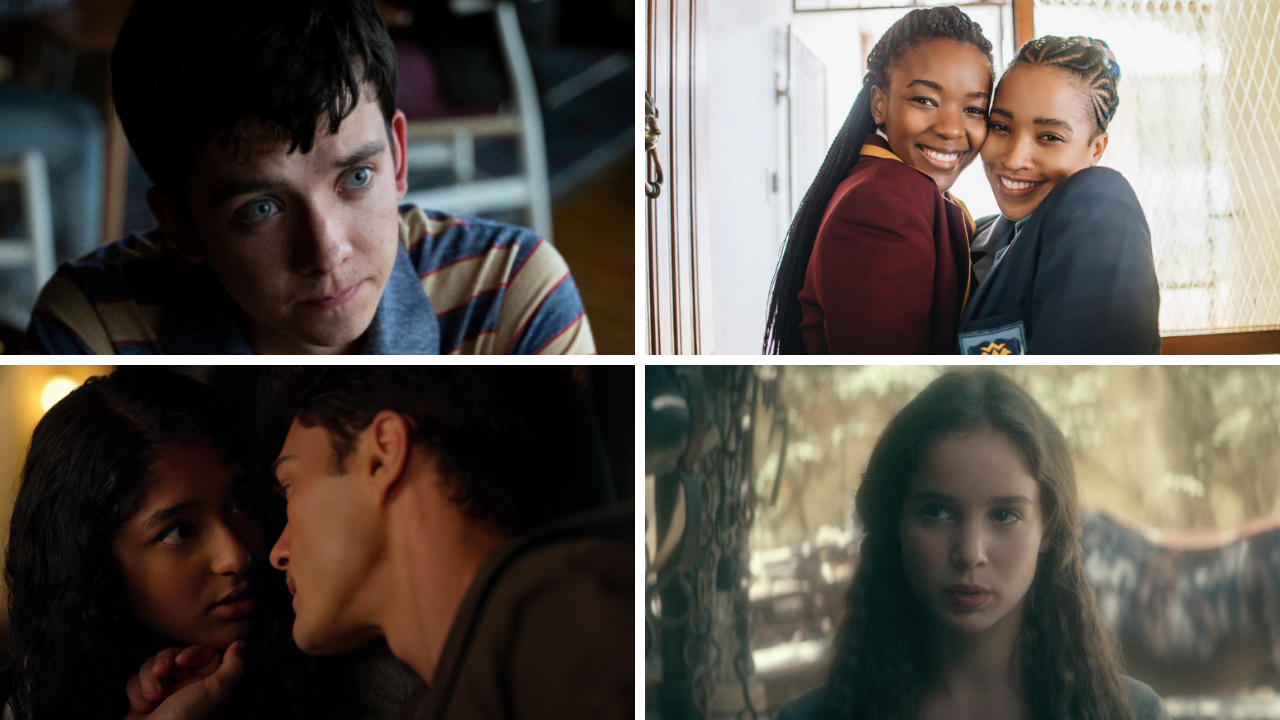 For many Brown girls who grew up in religious homes, faith and tradition ruled the day, sex education was a distant cousin you weren’t allowed to visit, and abstinence was the only relative you knew. Twenty years ago, the character that embodied this most was Lane Kim of Gilmore Girls. Growing up in a repressive religious household, despite her rebellious nature, any time she expressed sexual desire, Lane was punished by the narrative. However, more and more, mainstream TV shows have found the healthy marriage of sexuality, maturity, and its relationship with race and religious tradition.

Several Netflix shows have started to bring this intertwining or intersection to the forefront. Teenage Bounty Hunters show two Bible-toting teenage girls who are trained to hunt down criminals but are very, very into boys. The common denominator is that they are white and privileged and allowed to explore their sexuality. Shows like Never Have I Ever portray the dichotomy of how sex and religion play an integral part in teen girls of color’s maturation and wholeness.

In Never Have I Ever, faith is not just important, but her faith is what the lead character believes will bring her the “boy of her dreams.” In a sense, Devi, a first-generation Asian Indian American teenager, believes Krishna is invested in her sex life. For so many Brown girls, this is a huge concept. The idea that the deity you pray to could be invested or even the bringer and creator of sexual pleasure is often the opposite of what we see in religious Black and Brown family structures portrayed on TV.

In one scene, Devi is praying to Krishna and asking to be popular and have a great body and a boyfriend. For many, this is the first time in a coming of age story where the lead character is not only Brown but openly talked to a deity about sex and identity. Devi’s faith is strong yet she is still very unapologetically looking for her first sexual experience. Devi isn’t looking for love; she wants to lose her virginity and isn’t ashamed about it.

In contrast to Never Have I Ever, the show Warrior Nun features Ava, a white-passing young adult living in Spain, also coming into her own. Ava stumbles upon love while working for a covenant army. Both Devi and Ava, after experiencing a major trauma, want to explore their desire for love. Unlike Devi, Ava doesn’t have a relationship with her god beyond animosity and trauma. She is not interested in praying and doesn’t actually believe despite being given literal biblical powers, and yet she must navigate her sexuality in the repressive world of the church.

Prior to working for this heavenly army, Ava was an orphaned paraplegic teenager revived from death after a halo is placed within her body for safekeeping. The halo restores her ability to walk, but it also gives her the sight to see demons. What’s relatable about Ava is almost immediately after being brought back to life, her first goal is to experience all of life at once. In contrast to the Catholic church she now works for, Ava wants to experience all of life’s vices at once her first day with angelic warrior powers — drugs, drinking, and sex.

Although tethered to her duty and the church, one of Ava’s strongest feelings after becoming the “Warrior Nun” and getting powers is having the desire to kiss, make love, and be loved. Despite hostility and reprimanding from the other nuns to return to the church and discontinue the sowing of her holy oats, Ava carries on with a proud resistance to have her needs met. Here we see her as a “warrior” for God while fighting to escape with a boy to another country.

However, unlike Devi, Ava is able to push back against the church because of her perceived whiteness. This is clear especially in the context of her show where Ava can be wild while still brought into the fold of the church, while Sister Mary, a Black queer nun who was in love with the previous halo bearer, is shunned by her fellow nuns. Sister Mary undergoes a battle of wills between being chaste and her liberal ideals, while Ava feels entitled to act and behave as she pleases — recklessly wielding her power.

There is a certain privilege that comes with how white and white-passing families and religious structures engage/interact with sexuality on TV. There is a particular openness and acceptance that are unrealistic. Open discussion on sex, at least across the African diaspora, is treated with a certain level of taboo. Even asking your parents or other elders about sexual desire is perceived as disrespectful and off-limits.

What’s interesting about Puleng and Fikile in Blood and Water is that everything they do around sex and desire is cloaked in bold yet purposeful secrecy. For example, seventeen-year-old Fikile is having an affair with her swim coach. Meanwhile, Puleng wants to be with a boy who was previously entangled with Fikile. Going beyond desire, Puleng’s family were victimized by child trafficking, which further heightens the feelings of shame within the narrative. The theme of secrecy and restriction permeates Blood and Water.

In comparison, Sex Education stars a group of teens who are sexually repressed and confused. They look to the son of a sex therapist to answer their burning questions. The lead character’s mother, like so many white teen boy stories about sex, fosters a sense of openness and trust between parental figures and conversation of sex and desire. In Never Have I Ever, Devi is not allowed to date nor will her mother engage in conversations of boys and continues to keep her sheltered. For Ava, it’s the church that strives to keep her under their thumb and trapped. The common denominator in these stories is resistance when exploration is controlled. The zealous nuns are determined to bring Ava back to the church, against her will, and remind her of the obligation and mission to dispel dark forces.

Otis, of Sex Education, is a white teen boy whose’s only social responsibility is to his peers. Otis’s privilege and parental advantages afford him the opportunity to have open dialogues about sex with his mother, and he in turn passes that knowledge to his friends. It must be noticed, however, that Eric, his Black gay best friend, much like Sister Mary, is not allowed to experience desire without social, spiritual, and familial consequences. Much like  Devi, Puleng, Lane, and other characters of color, he must fight against the repression that has been instilled since birth.

All in all, we see more fertile ground being laid for white characters, where sex and desire are allowed to be explored and developed. Religion usually creates an inhospitable environment to sexual exploration and liberation for teenagers and by extension adults. It enforces heterosexist rules about how people should experience desire. What all of these shows have in common is that sex is forced within a certain level of secrecy. Secrecy fosters an environment of shame around desire that is maintained within the community.

Each person’s journey through their sexuality and faith is deeply personal, but socially we must begin to imagine what sexual liberation looks like beside (and beyond) faith. While white teens have begun to experience this imagining already on screen, Black and Brown teens have not. TV is not the end-all, be-all of the cultural imagination, but it can be a map for how to reimagine the future.