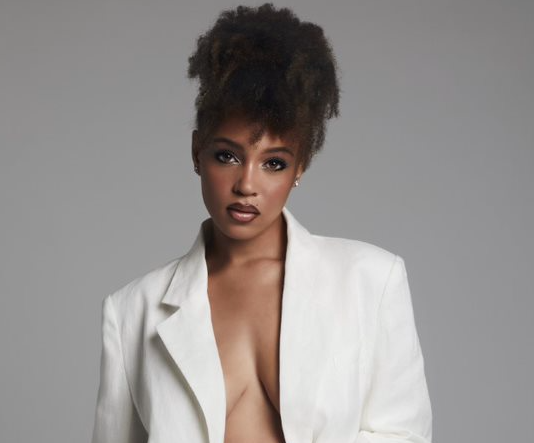 Reign Edwards is all about showing love.

You might not imagine that if your only reference point is Edwards’ chronically impatient character Rachel Reid on Prime Video’s The Wilds, but one interview with her via Zoom makes this abundantly clear.

It seems that sympathy is a driving motivation for both her life and her acting style. “I think there’s a lot of interesting things you can learn just by listening to people’s stories,” Edwards says. “I think [listening to stories] allows me to have a peek in, if it’s not my story. It allows me to have this connecting line so that I can bring someone else’s story to life.” In all, it’s important to her that she tells people’s stories in ways that make them feel represented.

She brings this sympathy even to characters as divisive as Rachel. “A lot of people initially saw her and couldn’t stand her at all,” Edwards notes. “But then they saw the humanity beneath her and the struggles that she has.” The struggles Edwards refers to are Rachel’s eating disorder, covered in the show’s second episode, and Rachel’s fear of diving, an arc she deals with throughout the first season.

To represent these aspects of the character, Edwards underwent physical and mental preparation. In order to portray Rachel’s diving abilities realistically, Reign often did many of her own stunts. In fact, of all the castmates, by Edwards’ estimation she did the most of her own stunts, just barely beating out Sarah Pidgeon in that category. As far as mental preparation went, Edwards discussed Rachel’s eating disorder with a close friend who suffered from the same condition. She did this in hopes of making sure the portrayal came off “as real as possible.” For Edwards, it seems, a big part of showing love is showing the truth. This doesn’t mean, though, that she doesn’t love the escapism inherent to occasionally playing, and being, “badass.”

Edwards isn’t sure if Rachel quite fits her definition of badass, but, with a grace that seems a fixture of her personality, she allows that “badass” can be applied in different ways. “She’s definitely a bit of a badass… Season 1, she grabbed that girl by the ankle while they were underwater and wouldn’t let her come up for air. So she’s definitely a badass, but I think that it’s just in a different way” than how she meant in a previous interview. Still, Edwards adds, Rachel’s being badass doesn’t solely apply to her ability to maybe drown someone to death. She notes that Rachel facing her fear of diving is tough as well. She believes overcoming, or simply even facing, one’s trauma is likewise badass.

This interest in badassery manifests itself in Edwards’ recreational time via ATV riding, jet skiing, and parasailing. Besides all this, she still wants to try ziplining.

“I’m just a very adventurous person in that way. I wanna see and experience life to the fullest. [I] love traveling. All that stuff.” Despite this appearing that Edwards may have a lot in common with her character Rachel, Edwards says the personality overlap between the two is minimal. “I would like to think I have more patience than Rachel does,” she adds with a laugh, “and tend to be a little kinder to people, but there is some overlap.” The benefit to seeing the occasional Venn diagram between the two, Edwards finds, is that it teaches her to work on less helpful traits she shares with her character. “After I film the season, it’ll help me be a little bit more self-aware in terms of how I suppress things, because Rachel does it all the time.” She chalks this overlap to, like Rachel, being a perfectionist.

Here, it’s easy to see the part of acting that requires an actor to bring parts of their own being into a role in order to flesh it out beyond stock characterization. If Reign Edwards doesn’t sympathize, doesn’t show some love for Rachel Reid, the character might descend into a bland “tough girl” role, or even an “angry Black woman” stereotype. Thankfully, the writing and acting ensure this is not the case.

Edwards’ perfectionism, she believes, stems back to having been in the entertainment industry since the age of three. “You always have to be on your best behavior, especially as an actress of color. So, there’s that added pressure of making sure that when I walk on set, I’m representing in a positive light, not a negative one. A human light, not a stereotypical one.”

Still, in a world where articles abound about the apparent strangeness of a child actor turning out “normal,” Reign credits her mother with helping her keep her head on straight.

“I have an amazing mom who was with me and taught me as I was in the industry. You hear a lot about TV moms or show moms trying to live vicariously through whatever. But I was very grateful that my mom wanted to make sure that, if I wanted to do this, I was equipped to,” Edwards says. In addition to her mother’s guidance, it appears that faith plays a role too. “I pray a lot. I pray for my stability and also try to protect myself in those ways and put things in place to make sure that I am doing that.”

We end by discussing the upcoming second season of The Wilds. “It’s gonna be a journey,” she says, especially now that an island of boys has entered the mix. “This show doesn’t …” — she searches for the right words — “This show doesn’t do subtle.”

That statement could mean myriad things. But, with Reign Edwards, it’s clear she’s saying it with nothing but love.