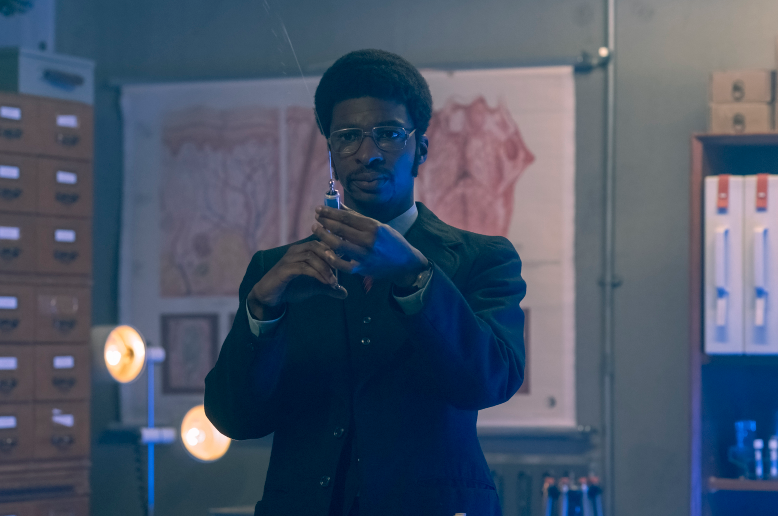 British star of stage and screen Simon Manyonda has made a career of Shakespearean soliloquies and on-stage prowess. After starring in productions like Julius Caesar, Welcome to Thebes, and similar ilk, Mayonda is setting his sights on the screen. He’s a graduate of the London Academy of Music and Dramatic Art (LAMDA) and every role he takes is infused with Mayonda’s special brand of sophistication and grace.

Now he takes on the iconic role of Lucius Fox. Most popularly portrayed by Morgan Freeman, Lucius is one of the few characters of color in DC comics and arguably one of the most important when it comes to supporting Batman. HBO Max’s Pennyworth: The Origin of Batman’s Butler, follows Alfred Pennyworth (Jack Bannon) before he becomes the butler to Thomas Wayne (Ben Aldridge) and later Bruce. Set in 1950–60s London, Pennyworth gives us not only the background of the man/myth/legend Alfie himself, but also of Thomas and Martha Wayne and of course, Lucius Fox.

The future tech guru makes the most of his supporting role and becomes one of the standouts of the series, now in its third season. Lucius is in some trouble and it will take quick thinking, analytical prowess, and maybe a smidge of handsomeness to be saved. Manyonda’s got all three in spades.

I had the pleasure of chatting with Manyonda about his love for Lucius and what to expect in the last few episodes.

What’s your history with Lucius Fox?

I first saw him in Batman: The Animated Series so I knew him, but I never really retained who Lucius Fox was — even in The Dark Knight films, you know? So when the opportunity to play this part came along, I definitely jumped at the chance. It was a great opportunity to play an African American hero in the DC universe. It was exciting to be able to reinterpret the role from the beginning.

Was there anything that you put into Lucius or his storyline that wasn’t on the page?

Funnily enough, I’m telling this story for my art project called Life In Art! So, when I was preparing for Season 3, I didn’t realize there was going to be a time jump. During the break I was working on a TV show in Amsterdam, and during breaks I would sit on a bench just to watch the world go by. I would look at all the houses, and on the top of the houses they all had these hooks. The hooks were above these big windows, and I realized they were for furniture — hoisting furniture from the street. I was watching the 1966 Batman at the same time and I thought, “If we’re in the ’60s and we’re altering the universe, that must mean that Lucius Fox invented that!” So I texted one of our EPs with this big, elaborate backstory. Lucius Fox is an avid climber, he invented the grappling hook, and he should give Alfie a grappling gun at some point and later he’ll pass that on to Bruce. We see the grappling hook in Episode 4!

That’s amazing! You know we do see Lucius get into some trouble and scrapes, but he’s always able to get out of it with his charm and analytical prowess. What would you say is his method for handling high stress situations so coolly?

His method is to just make it mechanical in his mind. In Episode 4 when he’s helping Alfie with a rescue, they suddenly become under gunfire and threat. Lucius starts inventing in his mind and thinking about what he needs to create to live. He’s got to start talking about aluminum and then alludes to what would then become the Batmobile. So the way that Lucius deals with everything is via intellect and logic.

He’s able to compartmentalize a lot, but almost to a falt.

Right. There’s a lovely scene between Lucius and Martha [Emma Paetz], who are obviously friends and quite close and they work together. But as soon as Martha says, “I’m asking your advice as a friend,” it becomes very uncomfortable. Yes, they’re friends, but he doesn’t want to talk about it.

It’s as though emotion can lead to a lack of safety.

Yeah, and with the inventions, he can have some element of control if it doesn’t work. He can solve it. He’s happiest when there’s a problem that can be solved.

So I gotta know, where do you land on Batman having an older sister?

I think it’s interesting. I can’t wait for Season 4 to find out what’s going on with this older sister that he has because it’s difficult to know if she’s going to come to a sticky end.

What would you like to see for Lucius going into the next season? Is there any particular storyline that you’d love to see played out?

I’d love to see how he explores his relationship with Celia. Because she’s a cyborg, he will have to deal with his love and understanding and avoidance of life. To come to terms with the idea of technology along with the person he cares for on a human level — but they’re all in one body. It’ll be a complex thing because he retreats into science in order to escape human connection, right? So I’m excited to explore that.

Pennyworth is airing now on HBOMax.