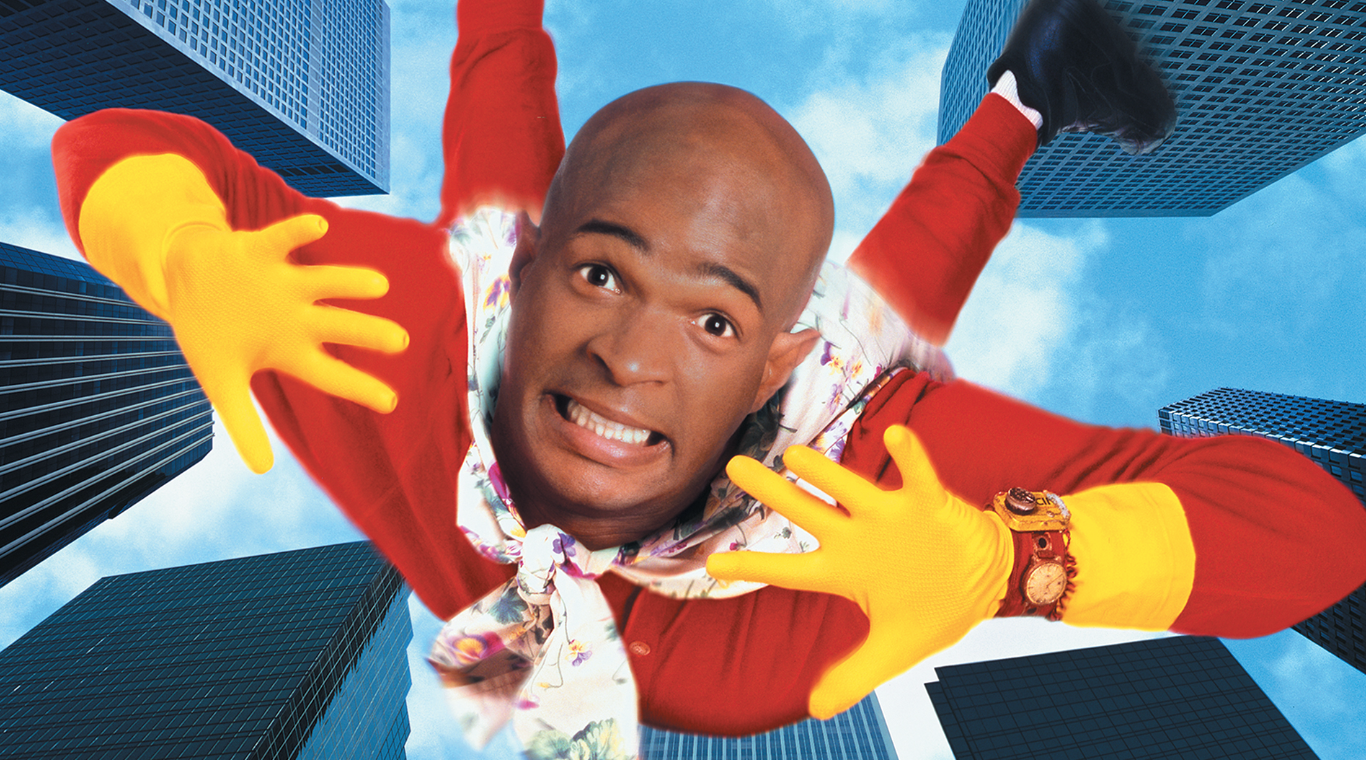 Let’s keep it a buck.

When it comes to Black superhero movies, the crop of films that are out there is kind of depressing. There are only a select few that are grade-A top-notch films and perhaps some honorable mentions out there. The 90s, however, brought up a slew of films about Black superheroes. 1993 gave us Robert Townsend’s Meteor Man, 1997 was Michael Jai White’s Spawn, and 1998 Marvel introduced us to our first superhero from its universe through Wesley Snipes in Blade. However, as we travel back in time to the 90s, specifically the year 1994 — it’s time to take a look at Damon Wayans’ Blankman.

The story of Blankman is not an intellectual property adapted from a comic book or graphic novel. Damon Wayans penned the script along with screenwriter J.F. Lawton, known for writing the iconic Julia Roberts film Pretty Woman. Darryl Walker (Damon Wayans) and his brother Kevin Walker (David Alan Grier) live with their grandmother (Lynne Thigpen). They spend their days watching re-runs of the 1960’s series Batman on their TV.

Batman becomes the icon and inspiration for Darryl in his adult life as he increasingly becomes more disillusioned about the safety of his neighborhood. Crime rates are up, drug use has run rampant and the city needs protection. Darryl is also probably one of the earlier blerds in cinema — he’s gawky, awkward, wears glasses, and has an unworldly awareness about the realities of life. Although it is never mentioned in the film, it is likely today Darryl would be labeled as being on the spectrum.

His brother Kevin lives with him in their apartment and ultimately is there to clean up some of the messes Darryl makes when he’s experimenting with his various inventions. And although Darryl has an unorthodox approach to creating weapons, gadgets, and robots, he’s highly skilled and a mastermind at the art of creating great tech.

To add another Batman reference here, he would be considered the Lucius Fox of creating an arsenal of defense if he were working for Batman. Living in the hood however and not having the billions of dollars at your disposal through Wayne Manor, doesn’t allow for the most sophisticated selection of telecommunications and robotics. This also includes Darryl’s wardrobe.

A shift takes place in Darryl after his grandmother is tragically murdered by the henchmen of mob boss Michael “The Suit” Minelli (Jon Polito). The mafia wants control over the city and forcefully asserts a partnership with newly elected mayor Marvin Harris (Christopher Lawford). When grandma volunteers one afternoon at Harris’ election headquarters, she’s caught in the crosshairs of a robbery and a threatening message from Minelli’s crew. She is shot to death.

In a scene that is supposed to be dismal, it turns out to be comedic when Darryl bawls as a baby and Kevin hands him a handkerchief. This scene also illustrates the dichotomy between the two brothers. Darryl wears his emotions on his sleeve and has no scruples about how he approaches his worldview. As for Kevin, he watches over the funeral service with a stoic look and stays composed. Kevin is a man who is internal and has trouble vocalizing how he feels about a situation. This plays into his interest in Kimberly (Robin Givens), a woman he works with at the news station.

Darryl, filled with grief, anger, and possibly some revenge, creates a liquid formula by accident that makes bullets or any metal impenetrable. Hilariously wearing a bedsheet as a cape and cutting out holes in fabric used for a mask, he now has a superhero costume. One of the silliest moments in the film is when the origin of the name Blankman came to be.

After rescuing a pregnant woman from an elevator that has malfunctioned, and helping deliver her baby (because of course she has to also go into labor to make this rescue more intense), she asks for his name. Darryl is at a loss for words. His brother Kevin there by his side during the rescue effort tells her, “He’s gone blank ma’am.” Somehow she interprets what he said as “Blankman.” I’m not making this up. Watch the movie clip below:

There are several problems with Blankman. The script is weak, as noted in the example above and the character development is lacking. Blankman becomes inspired to become a hero after his grandma’s death and was a fan of Batman movies, but the story doesn’t really dive into the core of why he decided to become a crime fighter. Sure, we can speculate his stanning of Batman and life in a crime-ridden neighborhood was the catalyst, but the script falls flat in forming these elements to properly align with Darryl’s approach to his newfound sense of building this alter ego.

There’s also the acting. Damon Wayans is actually a pretty talented actor, and one of my favorite action films of his was The Last Boy Scout. However, the sloppy depiction of a dweebish superhero is too uneven. For example, in a scene when Darryl spends a day with Kimberly, to who he has now grown an attraction, his childlike-soprano voice drops into a baritone. It’s almost as if Wayans forgot he was still in character. Then after she kisses him, Blankman convulses into an orgasmic seizure and his “Blankman-voice” suddenly comes back.

People who love Batman may have an appreciation for this film as the movie uses a Blankman bumper between scenes like the 1960s show during scene transitions. Unfortunately, if you’re rating this film based on story structure, direction, and performance, it’s bad all around. Mike Binder, who directed the film, makes a cameo appearance as a psychologist. Ironically, it’s one of the funnier moments of the film that the director chose to make a cameo in.

Blankman at least tried to create a space for the Black superhero, even if, cinematically, this film is a failure. It’s not lost on me that there are probably young Black boys (and perhaps girls) that watched Blankman in the 90s and finally saw themselves reflected as a superhero. Blankman at least deserves some credit for that.

I can’t, in good faith, say this is an exceptionally well-made movie. However, I can at least say that it will be on every Black superhero movie list you will ever see. Blankman has managed to indelibly print itself in the history books, and I can’t help but respect that.

Blankman is currently available for streaming on Tubi and Prime Video.