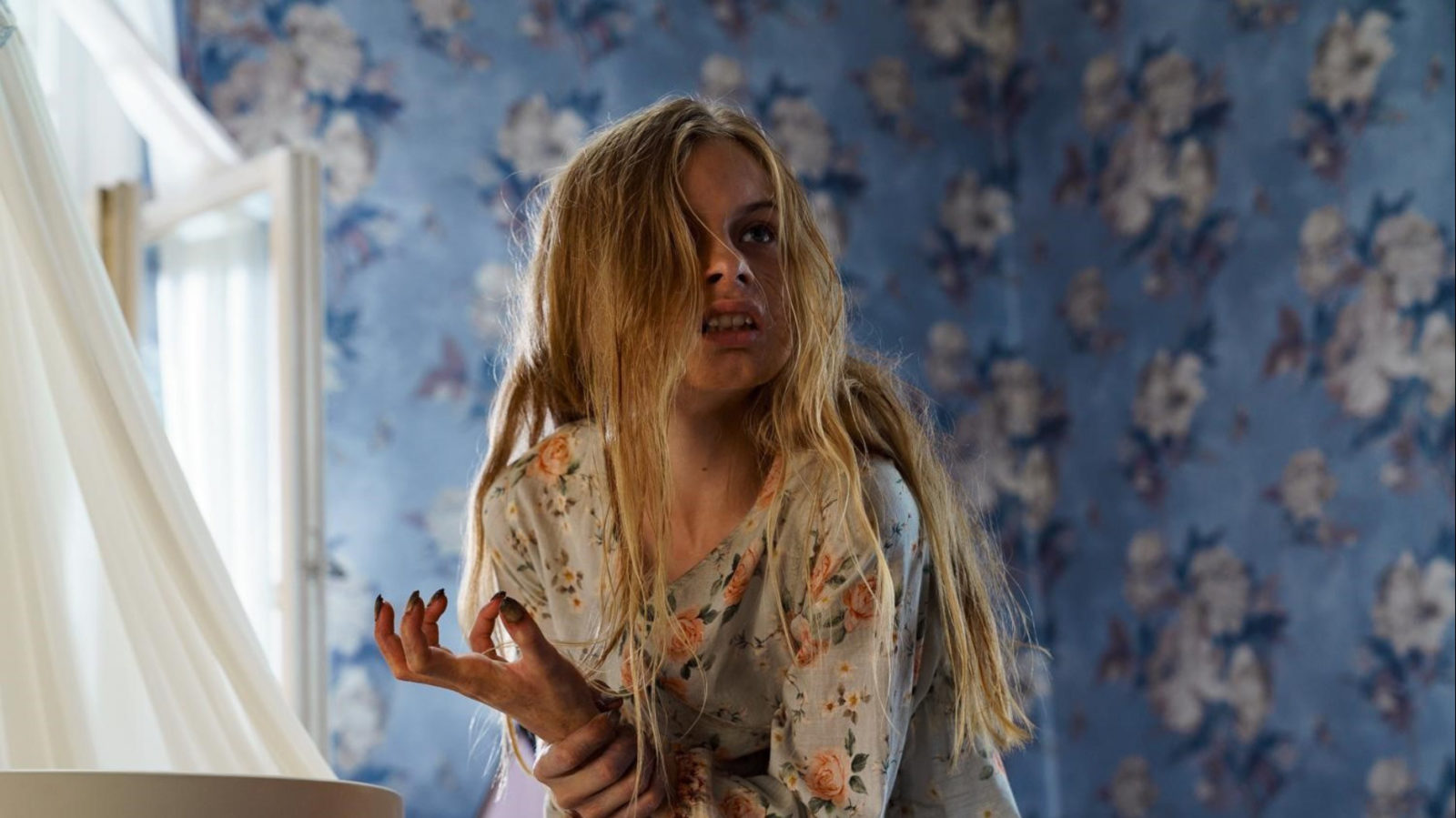 Finnish filmmaker Hanna Bergholm makes her feature directorial debut with Hatching, a surreal tale examining feminine emotions, maternal instincts, and the monsters we keep hidden. Written by Ilja Rautsi, this horror film is more than what it appears to be, much like its characters. The exterior is pretty, but it’s the ugliness that tells the real story.

Hatching follows Tinja, a young girl whose main goal is to please her obsessive, mommy-blogging mother. Mother has crafted this perfectly pastel world, and when it’s invaded by a bird flying around the living room, shattering all their delicate decor, Mother snaps its neck. The sound of breaking something’s neck is visceral and abrupt. Later that night, Tinja finds the bird’s egg in the forest and brings it home to nurture herself.

As the egg grows to an enormous size, Tinja vows to take care of it, forming a bond before it’s even hatched. And what hatches is more than a surprise. The creature sort of looks like it could be in Harry Potter, bony with big eyes. It’s adorably creepy in a way that brings out Tinja’s maternal instincts. Their interactions are disgusting, squelchy, and messy, much like birthing and motherhood in general. Other than being inhuman, the slimy and slightly deformed bird-esque creature sticks out among the pretty, pink, and glossy world. Tinja gives the creature the love and care she longs for from her mother. Its coos and caws are very raptor-like and its limbs are different sizes. But unlike her mother, Tinja loves her hatchling despite its visible flaws.

Hatching is told from Tinja’s perspective, which is likely why all of the younger characters (including the creature) are given actual names while most of the adults simply go by their titles — Mother, Father, Coach. There’s a distinction between young and old, not in the Charlie Brown way, but to show how everyone sees the world around them. Adults see things one way, while Tinja’s destructive relationship with this monstrous creature changes her perception of reality.

Their world is soft, clean, and very blonde. There’s an abundance of floral patterns covering the walls in their house. Some of the interior design is tasteful, but the majority is just comically over the top. The overall aesthetic is light and feminine. Natural light floods all the locations from their home to the gym where Tinja trains. You can sense the darkness but it’s never actually dark. Since it takes place in the summer, it’s not even really dark at nighttime.

The film is set in the lovely suburbs of Finland. Its beauty does present a sense of peace, but there’s an eeriness both inside and outside the home that’s unshakable. Tinja’s surroundings are manicured to the point of surrealism. The identical candy-colored houses in this suburban neighborhood are reminiscent of Edward Scissorhands. Instead of a dark castle on the hill, there’s a dark secret in Tinja’s bedroom.

Tinja’s appearance is a reflection of her mother, and they often wear similar outfits. She wears mostly whites, light blues, and soft pinks. She’s like her mother’s doll — dressed up, showcased to the world, but not as loved when she shows any signs of imperfection. She’s made to project this image of innocence and femininity, but in reality, it’s just a mask. Tinja is held to the highest of standards and wrapped in pretty packaging but discarded when she’s broken.

Mother wears exclusively flowy pastel-colored dresses accented by gold heels and jewelry. She almost looks like she’s on her way to a ’70s era prom. She’s armed with a selfie stick and a permanent smile that only falters behind closed doors.

Like the main character in Black Swan, Tinja is raised to see her flaws before anything else. The obsessive quest for perfection is like Nina and Erica’s relationship. The film has a similar foreboding tone as The Shining, but it’s the quiet surrealism that reminds me of Dogtooth more than anything. There’s a hauntingly beautiful lullaby that Tinja and her mother sing that sounds like something that might play in a music box. It has a twisted fairy tale quality to it that would fit perfectly in a film like Coraline.

Hatching is a fascinating, nightmarish fairy tale about the gruesomeness of motherhood. It explores inherited perfectionism and what happens when emotions are constrained. It’s both lovely and terrifying, which is representative of motherhood (and womanhood) itself. Hatching will leave you questioning your own relationship with your emotions. The film is oozy, strange, darkly funny, and oddly touching — all things any horror fan will love.