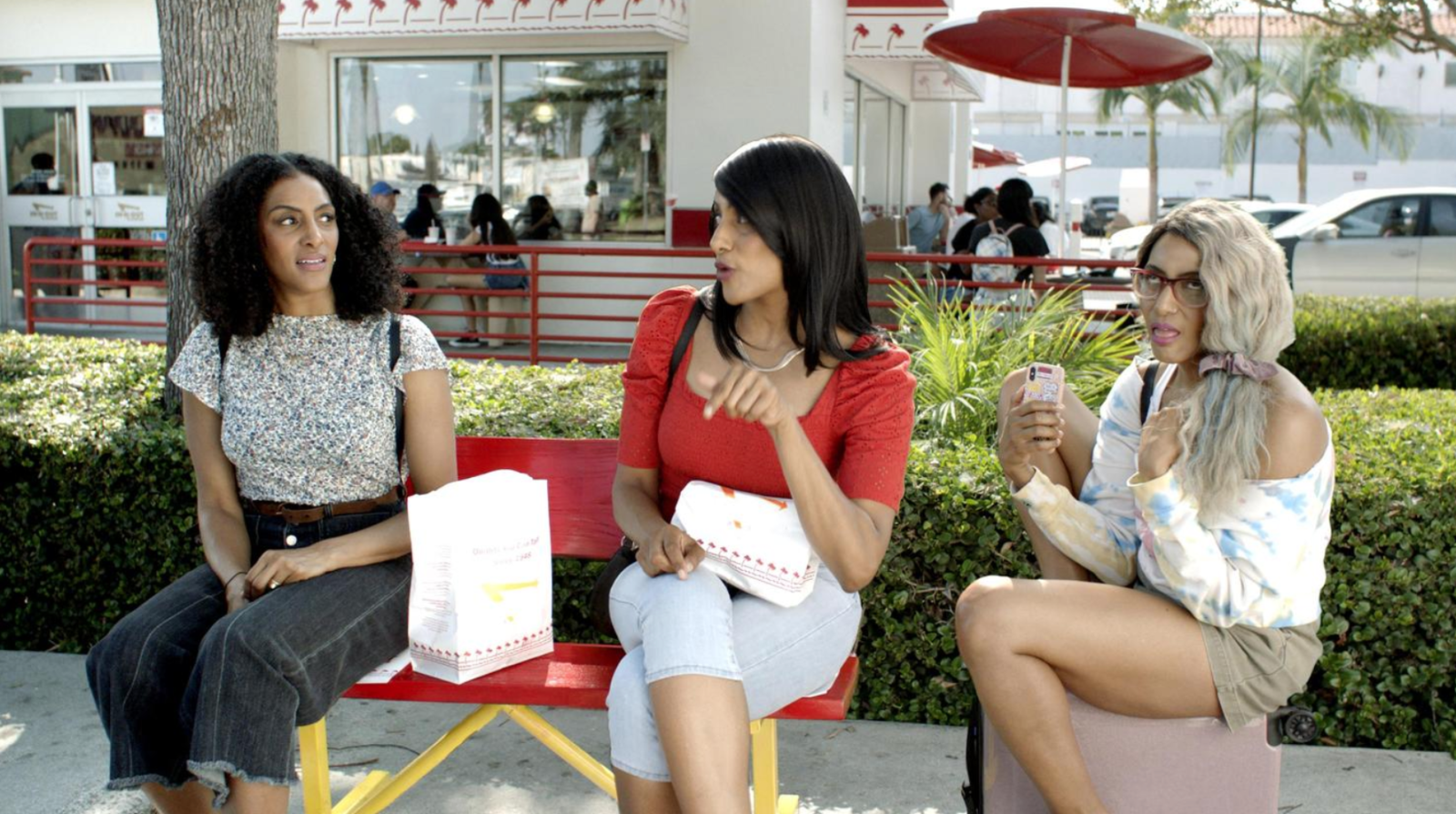 Sarah Jones courageously turns her angst into art by creating a part scripted film part documentary to transform her one-woman show Sell/Buy/Date into a moving nuanced deep dive into the complexity of sex work and the debate for and against decriminalizing sex work. This film is fantastic. The most compelling stories come when writers write their life experiences honestly. It’s not easy to let go of the ego and show yourself warts and all. The breathtaking part about Sell/Buy/Date is the unorthodox nature of how Sarah Jones chooses to make a film of her one-woman show. It’s very meta.

In case you don’t know her work, here’s a little background. Sarah Jones is a master storyteller. I saw her Tony award-winning one-woman show Bridge and Tunnel when it was first produced off-Broadway at the 45 Bleecker Street Theater (now called The Lynn Redgrave Theater) in NYC back in 2004. She wrote the show and played immigrants of all ethnicities from NYC’s boroughs with her superb acting, a few costume pieces, minimal set, and creative stage lighting. I believed I was watching all these different people tell me stories about their lives that moved me to tears.

Sarah Jones’ most recent one-woman show Sell/Buy/Date was another off-Broadway hit and got backing to be made into a feature film, and then all hell broke loose on the internet. Sex workers were up in arms on social media when they found out about a film being made about sex work by a “civilian” (someone who has not done sex work). Sex workers who hadn’t seen the play heard about the film project and immediately voiced their outrage about culturally appropriating sex work. They even showed up at events to promote the upcoming project to protest Sarah Jones in real life.

The film Sell/Buy/Date opens with Sarah Jones backstage, half-dressed on a cot in her dressing room the morning after what must have been a great closing night party. The characters she plays in the show are characters in the film who interact with Sarah Jones in real-time with, Sarah playing all of them.

The first character who wakes Sarah Jones out of her closing night haze is Lorainne, “the 84-year-old Jewish Bubbe.” Then Bella, “a college sophomore whose major is sex work studies, and is ashamed of her white privilege” takes her place in the dressing room to warn Sarah not to check social media.

Then (the ethical consciousness of the film and my favorite character) Nereida, a “half Dominican, Half Puerto Rican all proud girls/women’s rights advocate,” gets everyone organized to vacate the premises and get Sarah to her mother’s house in Queens away from any possible protesters. Driving the Uber is Rashid, “the entrepreneur” who drops gems of wisdom throughout the film.​​ I still can’t get my mind around the editing of this masterpiece. One actor playing all the roles edited together flawlessly. Amazing.

The structure of Sell/Buy/Date is masterfully constructed to lead the audience on a journey through a tough subject allowing space for nuance, complexity, and intersectionality of perspectives without being preachy. Sarah places her own narrative dealing with the possibility of being canceled by sex workers on social media center stage.

She shows the real impact of what happens when a Black woman is on the verge of being canceled. Sarah Jones struggles with how or even if she should make the film is the journey of the film. The first wisdom bomb Jones’ character Nereida drops is: “The crisis is Sarah Jones. She’s so busy trying to be the “wokest” and please everybody that her play has now pissed off everybody.”

From there, Jones goes on a journey from NY to LA to Vegas, interviewing sex workers to get their point of view. The first person she connects with is a sex worker who responded to Sarah Jones on IG to meet up and talk IRL. Jones and Lain meet, and Lain shows how depictions of sex workers in dominant culture dehumanize women. It’s depressing to see American pop culture’s long history of ridiculing, devaluing, and disrespecting sex workers. Lotus Lain emplores Sarah Jones to let sex workers speak for themselves if she decides to make a film about sex work.

From there, Jones Tish Roberts, a human rights activist, shares her heartbreaking introduction to sex work through an older white male high-school teacher. He singled her out as a young Black girl who had little access to resources who wasn’t seen by her family or culture. He gave her attention and lured her into secret, sexual interactions in exchange for money when she was a 17-year-old child.

So Sarah Jones and her character friends all go out west. Rashid, Bella, and Nereida all set Sarah up with people who have had all kinds of success doing sex work, sex work advocates who want to decriminalize sex work, survivors of sex work, and anti-human trafficking advocates.

The most poignant part of Sell/Buy/Date was after Sarah Jones visits a legal brothel in Nevada. Nereida gives us the difference between agency and power. As we saw in the film Zola, in sex work, white women and Black and Brown women have a different value. The opportunities just aren’t the same. Transgender Latina activist Esperanza Fonseca takes the film to a deeper level as she simply states the physical danger that transgender women of color face as sex workers that give a whole other perspective about the possible negative impact of decriminalization.

Then, Sarah Jones meets PhD Student Jennifer Marley Tewa, a queer indigenous feminist who talks about the connection of oil extraction projects that create “man camps” where sex trafficking flourishes on native land and how when these workers come to excavate sacred lands native women experience a higher level of violent assaults and go missing. There’s so much that I didn’t know about sex work before experiencing this film. Sell/Buy/Date is spectacular and it left me in tears.