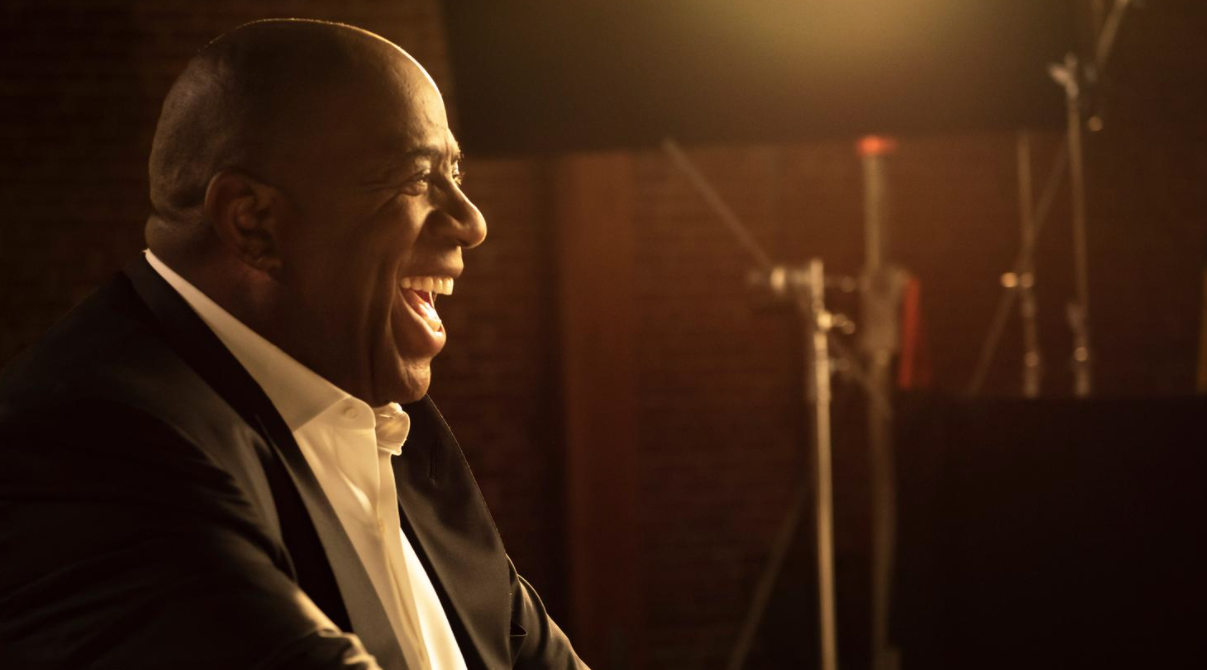 Everyone knows the name Earvin “Magic” Johnson or simply Magic Johnson. You don’t have to be a connoisseur of sports or an avid watcher of the NBA to even know who he is. Magic has indelibly made an impressive mark on American history because of so much he has done as an athlete, entrepreneur, and activist. As more documentaries profiling sports legends are emerging, the latest Apple TV+ doc They Call Me Magic — has just been added to the arsenal of biopics.

The 4-part documentary starts with Magic’s draft into professional basketball from his college days in Lansing, Michigan. In 1979, he was the first overall draft pick, and the team that drafted him won by a simple coin toss. Heads for a trip to the windy city of Chicago to play with the Bulls or tails for sunny Los Angeles to play with the Lakers.

If you’re not familiar, the HBO Max series Winning Time: The Rise of the Lakers Dynasty is a new show that chronicles the personal and professional lives of the Lakers in the 1980s. I’d recommend first watching They Call Me Magic to get the real-life context behind the lives of some of the people who helped shaped Magic’s career. This includes Lakers owner Jerry Buss, Lakers coach Pat Riley, Lakers coach Paul Westhead fellow NBA player Kareem Abdul-Jabbar, and many others who are prominently featured in the dramatic series. As for They Call Me Magic, the documentary doesn’t sugarcoat the life of the pro-basketball star. While Magic Johnson was loved and revered by fans, he also had a serious infidelity problem. His current wife, Cookie, is a featured subject in the documentary. She speaks candidly about how they met, their courtship early in their relationship, and the challenges they faced during their marriage.

There’s also the controversial firing of coach Paul Westhead who only worked with Magic for one season. Magic was the star player of the Lakers at the time and Jerry Buss’ golden boy. When Jerry got wind of Magic and Paul not seeing eye-to-eye, Paul was terminated. He was quickly replaced by assistant coach Pat Riley, who is most notably known for coaching the New York Knicks. Magic isn’t ashamed nor afraid to confront these controversies in his documentary. He was even so bold as to talk about how difficult it was to come to terms with his son’s sexuality. EJ Johnson, also a featured subject in the documentary, speaks openly about the moment he came out to his mother, Cookie, and how much of a relief it was for him. Magic mentions while he wasn’t pleased with the idea of his son being gay, he still loved him just the same.

I appreciated and respected that the documentary went into rocky and difficult territory for the interview subjects involved and Magic himself. Often authorized biopics are heavily sanitized and don’t disclose all of the controversies of the person behind the story. There’s even a moment where the documentary shows a blunt interview of Magic openly stating he had intercourse with six women near the time he was diagnosed as HIV positive.

Magic Johnson led the Los Angeles Lakers to victory as a five-time NBA champion during his tenure with the NBA. He was loved and adored by fans and respected by colleagues. The doc shows his friendship with NBA star Isiah Thomas of the Detroit Pistons. The two would hug and show their affection on the court often. This kind of fraternizing between two players of opposite teams frustrated coach Pat Riley at the time. However, it’s quite endearing to see the kind of friendship they had on and off the court. The turning point of doc, which was the turning point of Magic’s career and life, was when he announced he was HIV positive. It’s a moment none of us will ever forget, as Magic was at the height of his career when this news broke.

However, as we’ve come to know and what They Call Me Magic explores, is the journey Magic took as an activist. He became the face of HIV/AIDS, which stripped away stereotypes and homophobic stigmas about the illness. Through some convincing from activist Elizabeth Glaser, she encouraged Magic to be a spokesperson and advocate for those who don’t have the privilege of having the platform to talk about the AIDS epidemic. Magic Johnson forever changed the conversation surrounding the disease.

One of the best theaters I enjoyed when I lived in Harlem, New York, was the Magic Johnson theater. Magic created a chain of theaters nationwide, predominately in Black communities, offering a place of entertainment and also jobs to marginalized communities. There’s also a funny moment when he invited former Starbucks CEO Howard Schultz to a screening of Waiting To Exhale and Howard got a dose of what it’s like to be in a Black theater. Schultz was amazed at how engaged audience members were with watching the movie by talking back to the screen and having a strong visceral reaction to the film.

They Call Me Magic has so many celebrity subjects as interviewees and commentators, is a testament to how much the man has influenced pop culture. From former U.S. Presidents to hip hop moguls to fellow NBA stars, Magic has touched everyone in some capacity.

They Call Me Magic will inspire you to see a man who could have gone in a completely different direction with his life with the hand he was dealt. Instead, he turned and used that opportunity for the greater good. It’s quite magical when you think about it.

They Call Me Magic premiered at the SXSW Film Festival and makes its debut on April 22, 2022, on Apple TV+.