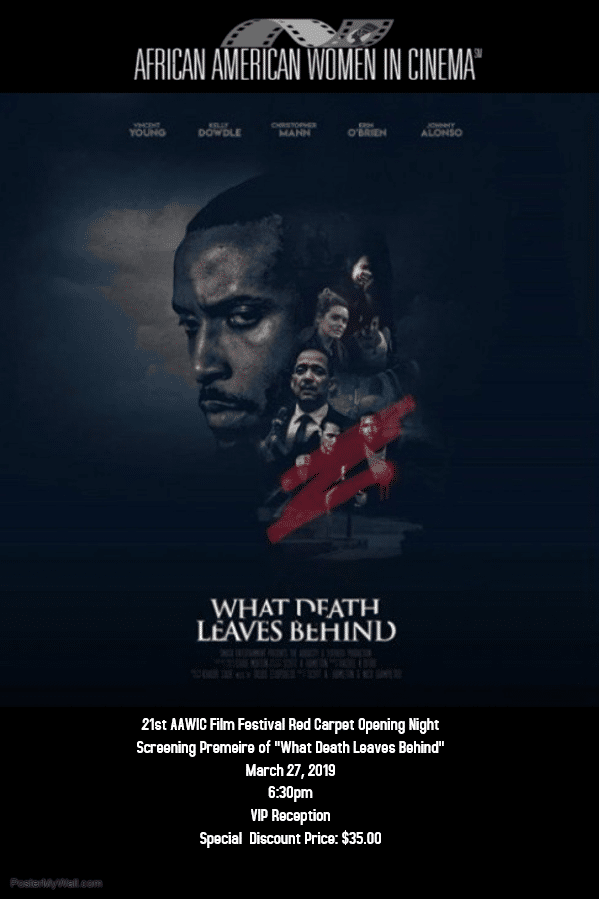 Due to What Death Leaves Behind content African American Women In Cinema will be launching a mental health initiative which incorporates this. Mental illness is more prevalent and visible than ever before —nearly one out of five adults in the U.S. population of 350 million — experience and suffer from mental illness — that is 47 million according to 2016 statistics.

“I am thrilled that we have reached an amazing pinnacle for this year’s Festival. This will be a historical event and super excited about all of our partners. The unique programming for this year will be one to remember for many years to come ” states, Terra Renee, President of African American Women In Cinema.

African American Women In Cinema is pleased to announce a special discount on the Red Carpet Opening Night ticket this Saturday and Sunday only!!

Purchase your ticket using the code Fest2019 provides a discounted rate of $35.00

Award-winning producer and network executive, Tia A. Smith is one of the most sought-after creatives in the industry today, continually developing culturally shifting projects that leave lasting imprints on audiences around the world. Known for spearheading and identifying commercially marketable projects, Smith is a rare executive whose work spans the spectrum of digital media, independent, corporate, scripted & unscripted television, film, development/current, and live events.  Smith is a long-standing member of the Producers Guild of America and was most recently selected to represent the guild as a speaker during the United Nations’ “Commission on the Status of Women: The Role of the Producer” Summit.

Rachel K. Ofori is a highly motivated professional that fosters not only the art of the film business but productivity as well.  Working in varied vocations of entertainment and production for over the past decade, she has garnered opportunities as a personnel manager and producer for events such as world-wide pharmaceutical launches, and 5 years with Made NY Fashion Week, US Open Golf and US Open Tennis.  She is a published award-winning producer & writer, a former on-air personality for ABC with the Philadelphia Eagles, has worked on projects ranging from local PBS commercials to blockbusters under Warner Brothers Studios, and most recently her first self-produced feature,’ What Death Leaves Behind’.  Her goal for all endeavors is excellence– By empowering others through servant leadership, her aptitude for business, & belief in team, Rachel looks to identify avenues and critical relationships to continuously meet that goal.

Prior to Plaza 7, Francesca worked with international news agency Reuters LLC in their Sales and Editorial departments.

The ON! Channel and AAWIC Announce New Opportunity for Filmmakers and Content Creators