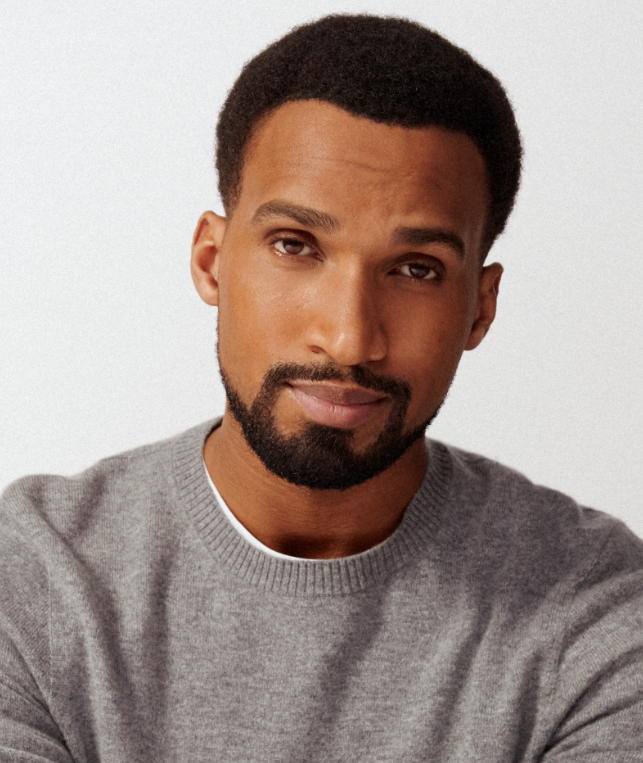 Nathan Mitchell is the guy to watch in 2023. He has quickly become a familiar name and face as Zion in Netflix’s Ginny & Georgia and the man behind Black Noir in Amazon Prime’s The Boys. You may also have seen him in Supernatural, Arrow, and iZombie. We were excited to sit down and chat with Mitchell, who was born in Canada and is of Jamaican and Trinidadian heritage, about his current projects and to get to know him a little better. Check out the conversation below.

How did you come to be in The Boys?

A buddy of mine messaged me and said, “Dude, there’s a superhero show. You can audition for it. I think you’d love it. Go out for it.” I auditioned for The Deep. I thought it would be cool, but nothing happened. I was a little down. I went on vacation, and while I was there, my agent sent me an email from the show. She’s like, “Hey, do you want to tape?” I’m like, “I just got to the Dominican Republic. I’m just going to chill out a little bit.” I auditioned when I got back. I think I heard back four or five days later. I sent my audition tape on the 26th or 27th [of the December before being cast], and by January 2nd or 3rd, we were ironing out the details. I was on a plane the next day or so. It was a very quick process.

It’s interesting you auditioned for The Deep first. That would be a totally different character. Did you expect Black Noir to become so popular after Season 3? Did you expect that reaction?

I did not. You never know how people are going to respond to a character. All you can do is put your heart into them, care about them, and commit as much as you can. Then it’s up to people how they receive it. When I read the cartoon scenes, I loved it because I thought this was the perfect realization of his inner world. I didn’t really expect people to react the way they reacted. I was taken aback. I was surprised by how connected people were to the character. It was really touching. I had a conversation with Eric [Kripke, the show creator] about the death before the season started, at the very beginning. He said, “Yeah, you know, sometimes you have to kill your darlings.” I remember when I heard that, I took a day or two to mourn the character. Then on the day, it felt like someone was dying. There was an energy in the room. I felt it. Antony Starr was brilliant in that scene. It was a very powerful day.

We are glad that Ginny & Georgia is back for a second season and that you are back along with it. We didn’t get to know Zion as much as we wanted to. Will we see more of you in the second season?

It was very much, I’m here. I’m gone. You will see more of me. One thing I love about the second season is we get to see Zion really put down roots in Wellsbury and be there as a present father. There’s this cool dad vibe that he gives off. But honestly, I think, at the core, his love for Ginny and his love for Georgia are what it’s about for me. That’s what I relate to a lot in the role. At the end of the day, it’s all about relationships and how we support each other, help each other, and are there for each other. He really, sincerely wants the best for Ginny and wants to be there for her and Georgia.

Besides acting, we heard you are into martial arts.

Yeah. I started taekwondo for a brief stint, when I was four or five. Then I really got into it when I was six. There was a taekwondo dojo five minutes from my house. I think we were driving down the street one day, and my dad was like, “Oh, cool. We’re going to do that.” I jumped in and was quickly captivated by the notion of getting a black belt, having that goal, and achieving something. It just became a central part of my life. I did it three days a week. I met some of my closest and oldest friends there. It was a fundamental and foundational piece of my life. As time went on, I got my blue belt and my red belt and I started competing in tournaments. It was a lot of fun. I think one of the culminating moments was when I had just gotten my black belt, I competed in the junior national championships, and I won.

That’s awesome. Does this mean that you do a lot of your own stunts on The Boys?

I contribute. With any big action piece, they are, on the whole, protective of the actors. They have this policy that if you’re doing a stunt as an actor, you’re doing it with the other person’s stunt double to make sure everybody’s safe and there are no accidents. I’d say it’s a mix because we have a great stunt team that we use a lot, but I do like to jump in where I can and be a part of that because it is really fun.

We also heard you write music. Do you play any instruments?

Yeah. Writing music has always been a form of therapy for me. When I’m going through something particularly significant or I have really strong feelings about something, I write to let it out. It’s something I’ve been doing since high school. Acting I feel I’ve had to learn and develop, but writing music is something that has always been there. Singing-wise, I’ve never really gotten super-efficient singing lessons and that’s something I’d love to do. I’d love to do something with what I’ve written at some point. It’s always just been something that’s flowed out of me, when it feels like there’s stuff building up inside. I think it’s definitely an R&B vibe. I used to write a lot of raps as well, and that was a byproduct of drama class in school when we’d sit around having discussions about plays and life and what was going on in the world. It was an offshoot of that. When I was younger, I played a little piano. My dad introduced me to the steel pan — the instrument of Trinidad, where my dad’s from — saxophone, and then a little bit of ukulele.

We’ve talked about Ginny & Georgia, The Boys, about your writing, and ninja skills. If you weren’t on this great acting path, what would you be doing? Where would we find you in life?

I’d probably be an astrologer. Astrology is something I’ve been studying since about 2008. I’ve always found it really captivating. I’ve been doing readings for people for a long time, before acting. I do some professional readings for people, but I never fully jumped into it because I didn’t want it to feel like a job. I just love to do it. If I weren’t doing anything else, that’s the thing. That’s one of the things I’m most passionate about, so that would probably be a big part of my life. It is a big part of my life.

So you know all the astrological signs and stuff? I don’t really know what it’s all about. I just know I’m a Sagittarius.

It’s interesting. The sun sign is such a core part of your personality, but it’s only one dimension. As a Sagittarius myself, one of the things I identify a lot with is the need for independence and freedom, and this drive to grow and learn and take in new experiences. But there’s also your moon sign. That’s your emotional nature. Your Mercury sign is how you think and perceive. Venus is about how you love. Mars is about how you go after what you want. Then there are houses in astrology and there are dimensions to that. If you have your sun in the 10th house, the focus of your life will be around career. If you have the sun in your fourth house, the focus of your life will be around family. There are all these little dimensions in the way that the planets connect to each other. It’s a really specific thing when you get into the details of it.

That was great. I learned a lot about myself just now. Is there anything you’d like to say to your fans at Black Girl Nerds?

Thank you so much. Everyone who supports me, it means the world. I love that we’re telling a story that illuminates the life of a Black woman [in Ginny & Georgia]. We don’t have enough of that, and we need more of that. It’s so important to see yourself represented on screen. It has an effect. As a kid, you grow up and watch Disney’s Recess and you watch these different shows, and there was usually a Black male character in this group of white kids. As someone who grew up in spaces where there were a lot of white people, that made me feel like, “Okay, the way the world is projected, there might be a place for me here.” Black women haven’t had that as much. Other minorities haven’t had that as much. Sometimes it’s hard for people to really understand how much that means. We need more of that. Black Girl Nerds and other outlets that support Black people, or any minority, are a big part of the equation too.

Ginny & Georgia Season 2 premiered Thursday, January 5, 2023, on Netflix. Catch up on Seasons 1–3 of The Boys on Prime Video.