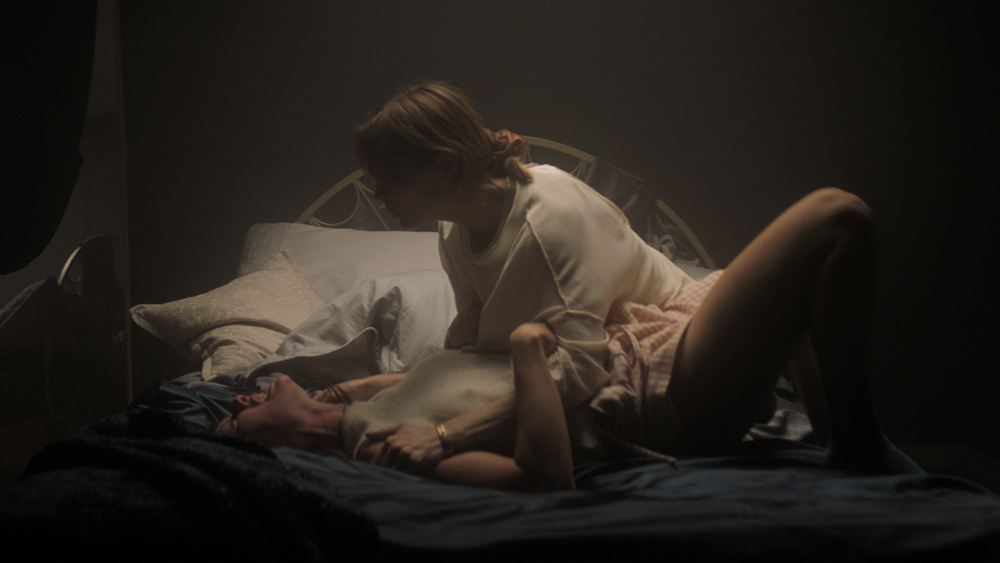 Feature directorial debut from Scottish filmmaker Ruth Paxton (Be Still My Beating Heart), A Banquet is an intense psychological horror about faith, mental illness, and mother-daughter relationships. Written by Justin Bull (Merge), the film explores the chaotic devolution of a family as one person discovers her life’s purpose and the others struggle to understand it.

Holly, a widowed mother of two teenage girls, faces an agonizing dilemma when oldest daughter Betsey begins exhibiting strange, disturbing behavior. When Betsey stops eating, it challenges Holly’s ability to be a nurturing mother. The maternal instinct to feed your child and keep them healthy is what drives Holly to explosive outbursts and desperate tactics to cure Betsy. By rejecting food, the daughter is rejecting her mother.

The family dynamics change as Betsy essentially becomes another person with new beliefs that Holly fears will infect the family. She’s worried about her younger daughter, Isabelle, and how her sister’s unhealthy actions will affect her.

Before her transformation, Betsey is awkward, nervous, fidgety, and unsure of herself. She doesn’t know what she’s interested in, which makes choosing a major in college difficult. Maybe it’s her vulnerability borne from uncertainty that makes her more susceptible to enlightenment. At a party, Betsey goes out for a smoke and becomes entranced by the red full moon. She wanders into the woods and comes back forever changed, having witnessed, or felt, a higher power. She describes this new sensation as a tingling that causes her skin to feel numb and “shut off.”

Betsey feels her destiny is to serve this mysterious higher power. This new faith filled a void inside her. She dissociates, like her mother, but then becomes hyper-focused on these indistinct whispers, looking up to the sky for answers and for comfort.

We peer into Betsey’s psyche as she listens to her mom cook breakfast — sizzling bacon, popping grease, a knife hitting a cutting board as her mom chops peppers. Betsey is nauseated by food now. At dinner, Holly snaps and begs Betsey to eat. She refuses, but Holly then presents her with a single pea. Betsey complies but has a violent choking reaction.

Holly’s (possibly undiagnosed) obsessive-compulsive disorder goes beyond her need to uniformly align household supplies. She needs to have her family in order, and Betsey’s behavior disrupts that. Betsey and Holly show how debilitating it can be to feel out of control. They both tend to get lost inside their heads. Time warps around them until they snap out of it.

Holly’s mother June comes to visit when she hears about Betsey, believing it’s just typical teenage rebellion. June’s relationship with her daughter is tense, and their parenting styles are decidedly different. It’s briefly mentioned that June had Holly institutionalized at one point in her childhood, something that Holly refuses to do to her own daughter. This unresolved trauma finds its way to the surface in the midst of Holly’s crisis.

Most of the film takes place inside their modern minimalist home. It starts off airy and spacious but becomes claustrophobic as the film progresses. The sound design also conveys the shift in atmosphere from comfortable to chaotic. The film opens with the abrasive sound of Holly scrubbing as her dying husband’s pained coughing turns into choking — a combination that hurts to hear.

Cinematographer David Liddell (Be Still My Beating Heart) highlights the intricacies of food preparation and consumption. The visual and auditory representation of food are the most effective elements of the film. Food is its own character, playing an integral role in the story and acting as a catalyst to Holly’s mental breakdown. The film amplifies the underlying grotesque aspects of everyday life — jarring sounds of utensils scraping against plates, the wet crunch of a salad being mixed, the carnality of teeth biting into a chicken wing.

A Banquet is a must-see for any fan of transcendental horror. It’s a surprising, unnerving exploration into the psychological power of food, the intensity of maternal love, and the mystery of life and death — three things you don’t expect from one film.

Additionally, the film isn’t quite what it seems. It subtly delves into sci-fi territory, with a similar tone to Melancholia. What the film does really well is establish empathy at the beginning. By the time the real terror sets in, we care about this family and it’s distressing to watch them go through this ordeal. It’s an effective film that makes us disgusted but also intrigued. Paxton told Variety that she “didn’t want, at any point, anybody to feel comfortable.” Well, she succeeded.

A Banquet premiered this week at the 2021 Toronto International Film Festival.