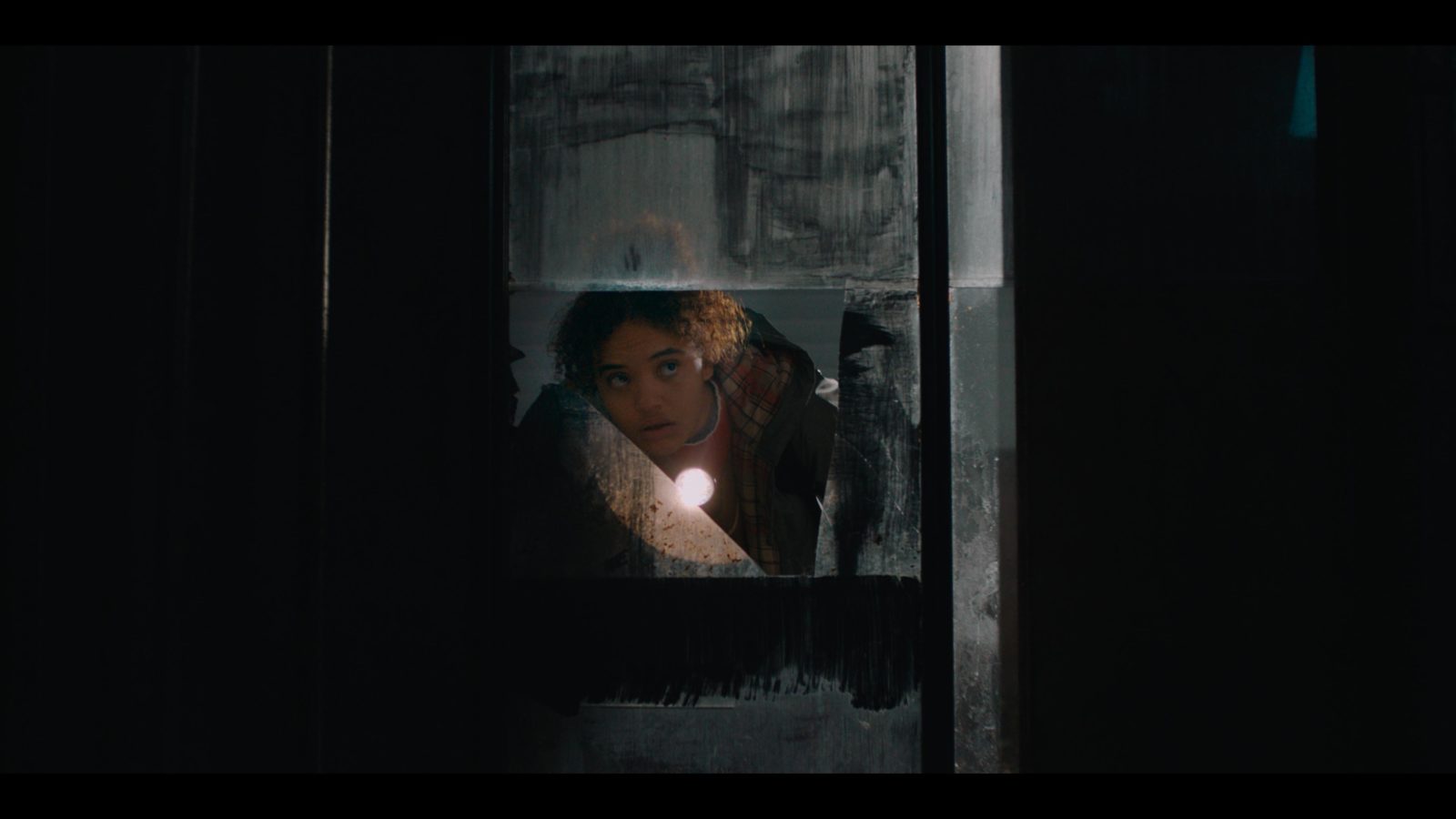 Writer-director Sophie Kargman makes her feature directorial debut at this year’s Toronto International Film Festival with Susie Searches, a dark comedy satire based on her 2020 short of the same name. The film, co-written by William Day Frank, delves into our cultural fascination with true crime, social media stardom, and how messy it gets when the two come together.

Susie (Kiersey Clemons) is a socially awkward, ambitious college student living in Ohio. She divides her time between caring for her ailing mother, going to school, working a part-time job, interning at the police station, and running her true crime podcast. Despite not having any friends or even a following for her podcast, Susie remains determined and eager, which some people find annoying. She proves that everyone, including the audience, has underestimated her.

When a classmate and popular YouTube influencer Jesse (Alex Wolff), goes missing, Susie takes it upon herself to find him. Sheriff Loggins (Jim Gaffigan) and the local police aren’t getting anywhere. Jesse’s whole “brand” is kindness, positive vibes, and meditation. He’s attractive and well-known, sort of a local celebrity.

Sophie Kargman introduces characters who could easily fit into archetypes but quickly shows just how authentic they really are. Susie is a lonely nerd with braces and no friends. But she’s also confident in her knowledge and investigative skills. From what we see of Jesse, he’s popular, from a wealthy family, and, we assume, a self-centered influencer. However, Susie finds that he’s actually more than that. Even Jillian (Rachel Sennott), her catty coworker (who looks so much like Shelly from Twin Peaks in her teal-blue uniform), doesn’t completely fit the mold of other movie mean girls.

Nobody is who they seem, something Susie discovers during her investigation. But she’s not totally who she appears to be either, which is what makes her so interesting. She’s not perfect or even 100% “good.” She benefits from his popularity, and her podcast gets a much-needed boost. She longs to be seen, and that part of her is relatable. But is this really how she wants to gain support and notoriety?

Though she’s intelligent and goal-oriented, Susie is still very childlike. I honestly kept forgetting that she was in college and not high school, but that’s likely due to her braces and clothes. Even though Clemons isn’t under heavy makeup, or even looks super different from her regular appearance, it’s a role that the actor fully embodies and makes believable as a real person.

Kiersey Clemons and Alex Wolff have great on-screen chemistry, leading an eclectic cast made up of emerging talents and veteran comedians alike. Dark comedy is a genre that still really lacks diversity. Clemons said, “I fell in love with the heart and peculiarity of Susie right away. Stories like this, starring women like me are few and far between.” Having a woman of color leading a film like this, and in a non-stereotypical role, is refreshing.

Kargman describes Susie Searches as “a cautionary tale about our society’s current fixation with insta-celebrity— and how it can even damage good people with positive intentions.” The film is among many stories satirizing the cultural obsession with true crime, particularly podcasts and social media. Even the university’s President Andrews (Geoffrey Owens) says, “Who would’ve thought that this true crime stuff would be so big with your generation?”

Shows like Search Party and Only Murders in the Building explore the absurdity of amateurs, armed with excessive knowledge gathered from hours of Dateline and Netflix documentaries, who think they can solve crimes better than actual law enforcement. Although, in these stories, it’s the super fans who crack the case and make the real investigators look incompetent.

Susie Searches has a gorgeous fall aesthetic with orange and brown leaves galore. Susie’s signature quirky corduroy and sweater ensembles are various shades of brown, yellow, orange, and green. It feels grounded in reality but still sprinkles in some fantastical elements like the  colorful Ms. Marvel-esque animations floating around Susie.

Cinematographer Conor Murphy (The Wretched) uses cool techniques to zero in on Susie like fisheye lens effects, vignettes, and standard close-ups. There are many times when what we see is slightly distorted, and we’re just as disoriented as she is. Flashbacks are also done in vintage film effects with burns and a little grain.

From Mitski to Mozart, music plays an important role in the film, establishing the tone by alternating whimsical and foreboding. The shift in sound also signals when Susie’s mindset and emotions change. When she’s caught off guard or starting to spiral, the transition between music styles is abrupt rather than seamless. Paired with a sudden change in camera positioning, it’s all perfectly jarring for a mystery thriller.

There are also more childlike sounds you’d hear from a music box. Composer Jon Natchez (Brittany Runs a Marathon) uses one particular piece that’s reminiscent of Coraline — sweet and haunting harmonizing but not as gloomy.

Susie Searches is a darkly satirical film that has the potential to become an indie cult classic in the vein of Ingrid Goes West, as well as more obscure titles like Saved, Thoroughbreds, Election, and Drop Dead Gorgeous. Like the best neo-noir dramedies, Sophie Kargman gives us an empathetic antihero we can relate to and root for, flaws and all.