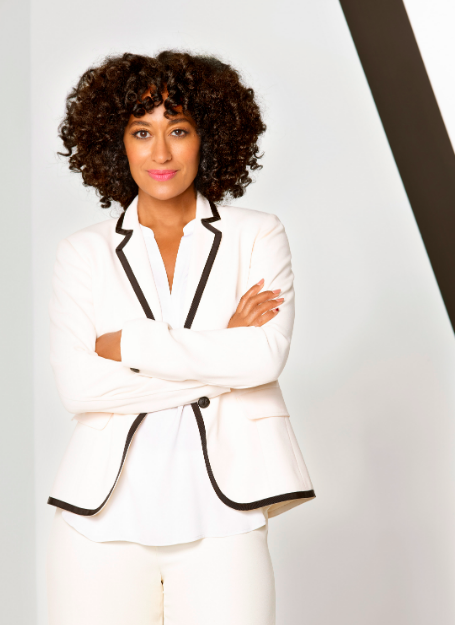 Mixed-ish, the prequel to the ABC sitcoms Black-ish and Grown-ish, is scheduled to debut September 24.

Mixed-ish explores the childhood and teen years of Rainbow Johnson, the present-day wife, mother, and doctor on Black-ish. Viewers will get to meet not only her parents (previously played by Beau Bridges and Anna Deavere Smith, now played by Mark Paul Gosselaar and Tika Sumpter) but also her grandfather (played by character actor vet Gary Cole).

Black-ish star and executive producer of Mixed-ish, Tracee Ellis Ross, daughter of the legendary Diana Ross and music executive Robert Ellis Silberstein, addressed some of her concerns and point of view on the new show, mixed race or biracial people, and even the #MeToo movement with press at the Television Critics Association (TCA) press tour last July.

Here are a few of Ellis Ross’ POV’s:

I would not go back to my teen years or my twenties if you paid me.

On Her Parents’ Mixed Marriage

They were both very open-minded individuals who had a very positive experience with both cultures so it wasn’t a negative thing.

On the Catalyst for Mixed-ish

There’s been a lot of dialogue and a lot of episodes and conversations around the fact that Bow is mixed, limited to jokes being thrown at her about being mixed.

I remember when I first got Black-ish, I was so excited because it was truly my first time playing a mixed woman on television. But even on Black-ish, we haven’t completely explored it. I think this is an opportunity for us to unpack that in a much larger way that I’m thrilled to be able to do.

On Mixed-ish TV Show Premise and Her Real Life

I don’t know if I would hinge any of that specifically on the mixed experience, but I will tell you it’s fodder for a lot of very funny stories — a lot of very interesting stories — and what it’s resulted in is me being a human being that can be a bit of a trendsetter. … I don’t know that I have the same way of describing it as [producer] Peter Saji in that, I wouldn’t say that I am, what did he say? Something about, “at home nowhere”? I can’t remember exactly how he put it, but that’s not how I would describe my experience.

To me what it has done is give me a lens in everywhere. Early on, I learned not to judge a book by its cover in a real, real way. That it was how I was the same instead of how I was different, and the ways that I was different were the most beautiful aces in my deck. They were a part of the texture that made our world stunning and beautiful and juicy and interesting.

I became somewhat of a trendsetter. I am comfortable in lots of different worlds, and it doesn’t frighten me to be the only one. I actually find it interesting and exciting.

On What the Show May Mean for Viewers

A mixed kid in America is a mixed kid in America. And there’s a lot of very archetypal experiences that we have that are the contradictions of these two heritages. Truthfully for me, my experiences within my family, similar to this family, was a protected, safe environment. My mixedness didn’t necessarily come up in a big way. But how you push up against the world is sort of where that gets ignited. [Mixed-ish] is about finding one’s own identity and learning to own that on your own.

On Rainbow’s Education and Assimilation on Mixed-ish

We’re actually going to see her thrive, and again, the difference with the other kids. Bow has always been interested in learning. She learned a lot on the commune and actually wasn’t held back by grades or any of those things. She actually was able to go at the pace that she wanted to go at, which was pretty fast.

So she is an inquisitive, curious young lady who really was thriving, and the school experience was a little bit limiting for her.

I wish I was this pretty when I was young but, I mean, we really do look alike. We really do. Look at the eyes on this one. I feel like we’re the same person.

On Not Being Shocked by the Rise of the #MeToo Movement