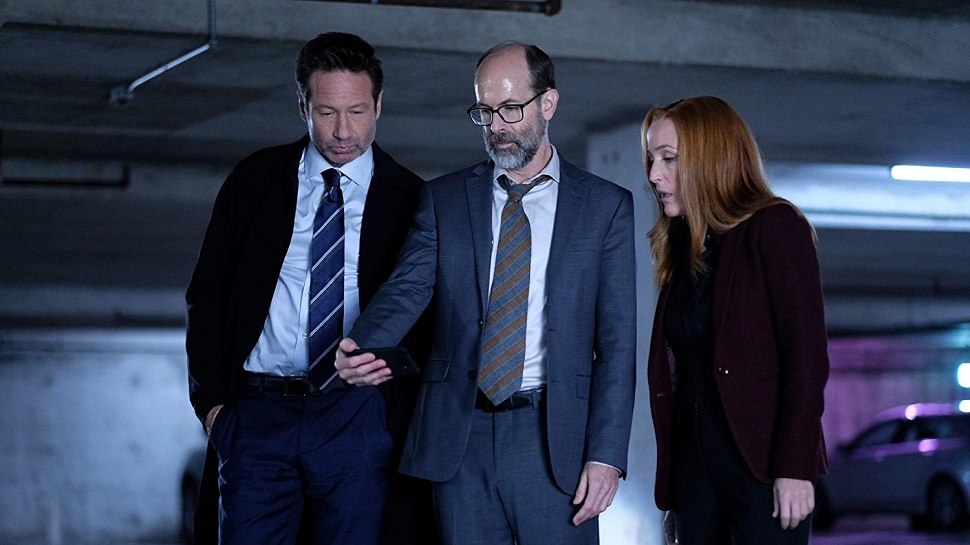 This is a Darin Morgan episode which means we’re in for a ride. He’s responsible for bringing the surreal and the humor to the X-Files with his episodes “Jose Chung’s From Outer Space,” “Clyde Bruckman’s Final Repose,” and last season’s standout episode “Mulder and Scully Meet the Were-Monster.” Tonight’s episode, “The Lost Art of Forehead Sweat,” is the spiritual successor of those episodes delivering an hour filled with mystery, runarounds, and telepathic aliens in sparkly clothing. What happened in this episode? Or more accurately, what didn’t happen in this episode? Truth, lies, conspiracies and false memories.

In a role reversal, an X — Mulder’s secret rendezvous sign — on his window sends him to his secret rendezvous spot where he finds a man eating sunflower seeds. The man, Reggie, begins talking about a conspiracy. A secluded parking garage and a mysterious man talking frantically about a conspiracy, this is right up Mulder’s alley. But Reggie is coming in a little strong even for Mulder. Reggie claims to know Mulder but Mulder doesn’t know him. He references an episode of The Twilight Zone, Mulder’s first episode, to prove he’s right about the conspiracy. The episode doesn’t exist, he tells Mulder and despite a later exhaustive search through his collection, he can’t find it. It’s not about the episode, it’s about the memory, Mulder tells Scully. In the flashback, we see Mulder’s adult head superimposed on a child’s body. An oddly funny sight that perfectly illustrates how we as adults often shape our childhood memories. That’s what this entire episode is about — memory and how it can fail us.

The same man gives Scully a package of Goop-O ABC, something she remembers fondly from her childhood which brings her into the case. Mulder tells her about the Mandela effect. It’s when you have a memory of something that can’t be backed up by fact. Like me remembering that time I hung out with Beyoncé. Can’t be backed up by fact and consensus will call me a liar.  I said this episode was about memory. Mulder, Scully and Reggie are all suffering from the Mandela effect in one way or another. This is part of the conspiracy, Reggie tells them. A conspiracy that involves aliens, memories being collectively altered and a mysterious “They.” They have orchestrated the memory wipes to further their own schemes and are in the process of erasing Reggie from memory which includes his relationship with Mulder and Scully. More on that relationship later.

“At some point, you’re going to have to explain who ‘they’ are. You keep on referring to this omnipresent, mysterious ‘they’ to give intentionality to random events, or external explanations for psychological ones,” Mulder tells Reggie. Mulder, you’ve made a career out of doing this. See the hypocrisy?

Reggie then drops an even bigger bombshell. After Grenada, he joined the FBI and founded the X-files. “We used to be partners,” he tells them dramatically. What follows is an alternate version of scenes from The X-Files with Reggie inserted. Beginning with the opening credits with the character names instead of the actors and Reggie Something appearing after Scully. They flash through a number of episodes with the three of them solving cases together. In case you’re wondering, the episodes they reference are: “Unusual Suspects,” the “Pilot,” “Tooms,” “Clyde Bruckman’s Final Repose,” “Teso Dos Bichos,” “Home” and “Small Potatoes.”

Neither Scully nor Mulder believes him. Why would they? Reggie is essentially trying to rewrite their history. But Mulder can’t let it go. He’s still trying to figure the mystery of Reggie and the missing Twilight Zone episode when he gets a call from “They” who turns out to be an actual person. Dr. They to be exact. A man who perfected memory manipulation …Or did he? Has he been shaping the way we remember our own history or has he only suggested it, letting the conspiracy nuts run wild with the possibility of it being true? Honestly, either is possible after his talk with Mulder. He drives home that truth has become subjective in this climate of fake news. People like Mulder, who seek the truth in a world where governments murder to hide their secrets, are out of date. Not when governments secrets like corruption, covert affairs, election manipulation and illegal wiretapping are free for anyone with an internet connection to find. Facts are presented in a way that leaves it up to the individual whether or not to believe them.

While Mulder was talking to They, Scully was looking into who Reggie is. He’s a government worker who suffered a breakdown and was committed. His knowledge of Mulder and Scully comes from his time at the NSA where he followed them through wiretapping.

Reggie kept referring to their last case together. Before he’s taken back to the psychiatric hospital, Mulder asks him what it was. This is when things get really strange. It involved a meeting with an alien similar to the one Reggie saw in Grenada. An alien wearing an Elvis cape and platform shoes. The aliens have been watching humanity and have found them wanting. They’re building a wall to keep humans from leaving the solar system.

“You’re not sending us your best people. You bringing drugs. You’re bringing crime. You’re rapists,” the alien says. Sound familiar? This season has been heavy-handed with the political allegories. As a parting gift, the alien hands Mulder a compendium containing answers to any question they may have. In one of my favorite parts of this episode, because it was just so ridiculous, Mulder throws himself on the ground in defeat. With all of the answers, the X-files are over. What is there left for him to live for? Reggie gives a speech about finding each other. They all hug.

The X-Files has weird episodes and episodes with moments of levity in them. Darin Morgan writes episodes with both that also make you think. This episode has us asking what is truth? While Reggie was being driven away, Skinner walked into the parking garage and recognized him. Was there some truth in what he said or was it really only a fake reality created by a mentally ill man? The episode doesn’t give us the answer which ultimately isn’t necessary.

This episode wasn’t perfect, I would rather not have them play torture and drone strikes against civilians for laughs. And Scully’s ending speech about wanting to remember her Goop-O ABC as it was when she was a child rather than trying it as an adult makes me think of the problems with this X-Files reboot. Episodes have ranged from good to what were you thinking? Though I’ve mostly enjoyed it, I can’t help but wish sometimes that I could remember it as it was without having those memories clouded by experiencing them now.