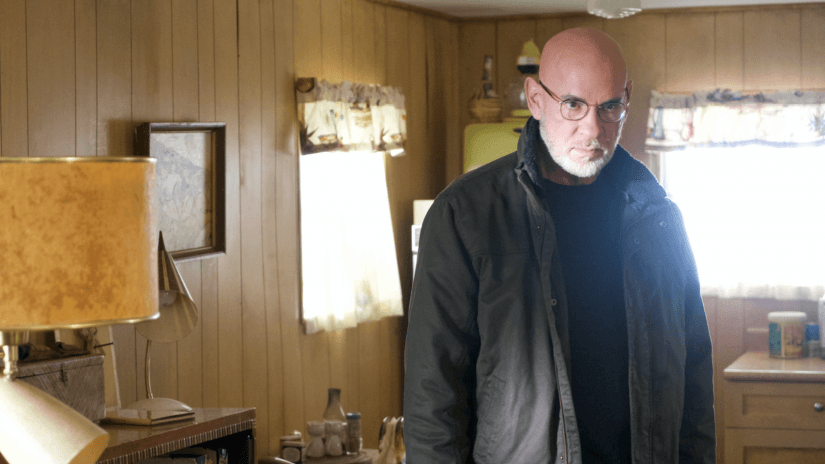 So much of The X-Files has been focused on Mulder and Scully. It’s their quest to find the truth, and we’ve watched that journey, with it’s high and it’s lows, for ten and a half seasons. However, there’s a third member of this team that doesn’t get enough shine. Walter Skinner was there before them and will probably still be there after they’ve gone. Since season one, he’s been with Mulder and Scully, as their supporter and the one that tries to get them to toe the line (at least a little). He’s supervised their baffling cases and low solve rates. He’s dealt with their insubordination, their propensity to disappear with no explanation or show up in his office making demands.  He’s stayed by their sides through some of their darkest moments and as we find out in this episode, against his best interests professionally. The show has not focused on him as much, giving us only a few Skinner-centric episodes and only the barest hints at his past. This week’s episode, “Kitten” seeks to remedy that by giving us a case centered on Skinner’s time in Vietnam.

Deputy Director Kersh sends Mulder and Scully on a mission to find Skinner who has disappeared on an unsanctioned investigation. Kersh clearly thinks little of Mulder and Scully and doesn’t bother to hide it. He believes they, and Skinner’s loyalty to them, are responsible for Skinner’s lack of promotion after thirty-five years in the bureau. Mulder and Scully’s investigation takes them to the small town of Mud Lick, where men are mysteriously dying from traps in the woods. While trying to locate Skinner, they have to grapple with their recent distrust of him with this new information that his loyalty may have negatively affected his career trajectory.

Meanwhile Skinner is conducting his own investigation. In the cold open, we saw him as a young man in Vietnam. He and a fellow soldier, John James, were exposed to experimental gas. The gas caused James to murder innocent villagers thinking they were monsters. Skinner learns from James’ son, Davey (played by Haley Joel Osment), that his testimony against James caused him to be committed to the mental institution just outside of Mud Lick. Davey blames Skinner for his father spending the majority of his life locked up. Skinner blames himself because he knew that the gas caused James to change and said nothing. He followed orders and hated himself for it ever since. Now he wants to try to make things right by helping James. Under the guise of taking him to his father, Davey strands Skinner in a trap in the woods.

Skinner’s military records are classified top secret, leaving Mulder and Scully little to go with. They figure out that Skinner came to Mud Lick looking for a man nicknamed Kitten a.k.a John James. That leads them to Davey. In the car on the way to Davey’s place, they discuss Skinner.

“He’s a man ruled by his moral compass above all else,” Scully says about him. Mulder believed that once but in light of recent events, not anymore. Even at the beginning of this case, Mulder believed the Cigarette Smoking Man probably had something to do with Skinner’s disappearance. Scully wants to give Skinner the benefit of the doubt based on their shared history.

They question Davey who claims not to know Skinner. Davey tells them how his father was experimented on by the government while he was in the mental facility. They continued to try to improve the gas James was exposed to in Vietnam. They sought to use the fear it inspired to control people. Mulder quickly figures out that Davey is lying about Skinner and has Scully drive them out of there. He tells her to call the sheriff while he doubles back and tries to save Skinner. Mulder gets himself stranded in the same trap. Of course Scully saves him. They both go after Davey but it’s ultimately Skinner who saves them both. Skinner has been on their side more often than not despite what they believe.

Mulder and Scully later question Skinner about what Kersh said. Skinner was once a kid who joined the marines out a sense of idealism, a belief that he was doing the right thing. His experience in Vietnam, trying and ultimately failing to save James, tarnished his faith in the government. He tried to bury that deep inside himself. Then Mulder and Scully came along and showed him that he could bring those doubts into the light and embrace them.

“Given the chance to advance my career by being blindly loyal to faceless puppeteers pulling strings from the shadows or to throw in with you two, make no mistake about it, I’d make the same decision every single damn time,” he tells them. After a season spent doubting him, this was the speech Mulder and Scully needed to hear. They both are now on Skinner’s side.

This isn’t the first time The X-Files has dealt with cases that involved returning soldiers. This isn’t even the first time Skinner has referenced his time in Vietnam. This is a showcase of Skinner, the kind of man his is and what he stands for. What does this mean with Skinner clearly having some kind of relationship with the Cigarette Smoking Man this season? He’s gained back Mulder and Scully’s trust, but for how long? I hope things aren’t as they seem, and he really is on Mulder and Scully’s side.