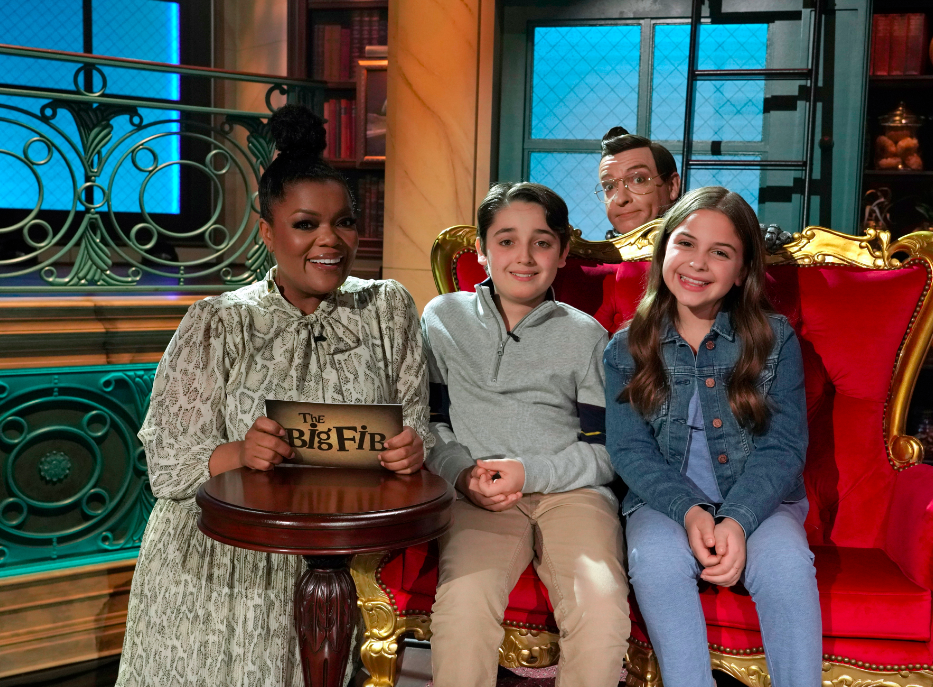 Yvette Nicole Brown is no stranger to television, although it has been five years since she played Shirley Bennett on Community.

She’s filled her resume with a slew of roles, some long-term and some not so much, including a stint on the short-lived series The Soul Man with Cedric the Entertainer, The Odd Couple, and The Mayor with Brandon Michael Hall (God Friended Me) and Lea Michele (Glee).

However, when we contacted her, Brown was excitedly coming off a nomination for her NAACP Image Award for writing BET’s Always a Bridesmaid and production on her new sitcom, Big Shot with John Stamos. Hollywood shut downs may have delayed Big Shot but not her new game show. The Big Fib is in the can.

Who came up with The Big Fib and why did you decide to do it?

The Big Fib was created by the team at Haymaker Productions and is based on the super fun podcast Pants on Fire created by Deborah Goldstein.

When I was asked to come on board to host The Big Fib and join the team as a producer, all for Disney+, I couldn’t say yes fast enough!

What I love most about our show is that though The Big Fib is for kids, people of any age can learn by tuning in. Beyond that, I love games and game shows, and there haven’t been many Black women who’ve served as hosts in the game show space. I was so honored to add my name to the list of those who have done it before me.

The Big Fib is a show where a kid gets the chance to ask questions of two adults, one who is an expert on a particular topic and one who is a big fibber. The goal is to figure out which one is the real expert after three rounds of gameplay. Our goal was to create a fun space for kids and adults to learn about different topics. We have the extra blessing of C.L.I.V.E., my “robot” sidekick, played by the hilarious and talented Rhys Darby. He adds a layer of fun and added insight to each topic.

Who do you think will be its core audience and why?

[The show] was created for kids, but I am super grown (lol!) and I found the guests and topics fascinating. There’s so much information to be discovered, and the kids ask such great questions. Also, and I am not proud to admit this, but I don’t think I ever guessed correctly at the end. I was fooled by the fibber just about every time. Kids are just naturally better at peeping dishonesty. Trying to suss out the fibber at home will be fun for everyone.
ALSO READ
The Cast of 'Black Panther: Wakanda Forever' Describe Filming Scenes Back on Their First Day of Set

Were you good at trivia and games as a kid?

I like to think so, but The Big Fib has made me doubt that. I wish I was better at spotting a fibber. I did and still do enjoy games and game shows. Playing them (and now hosting one) is one of my favorite things.

Talk to me about John Stamos.

We all know that he is one of the most attractive men on the planet. One of the greatest things about him — although he is really cute — is that he is kind and unaffected by the fact that people think he is a heartthrob.

He doesn’t go through life using that as currency. He sees people. He makes sure that people feel comfortable. I often say your experience on a show is dictated by whoever is #1 on the call sheet [the list of cast members for the day’s shoot]. You want a kind loving, generous person as #1 and John Stamos is that. He’s lovely, a lovely man.

What should we know about the show?

When is it coming out?

I don’t know when it is coming out but it is on Disney+ and we have a 10-episode order.

How are you spending your time during this stay-at-home time?

I’ve been getting in a lot of quality time with my dad (who I’m the caregiver for) and my dog Harley—a cocker spaniel I adopted from the Lady and the Tramp set last year. Oh and sadly, eating way too much.

Your dad must be so thrilled to have you.

Yes. He has dementia, so there are good days and there are bad days. When there are good days, I just talk to him. I told him the other day, “Ya know Dad, I’m just happy to have you here with me.” And he said, “I’m really happy to be with you Yvette.” And that was everything.

That’s really what life is supposed to be about; taking care of each other and really being a decent person to the person who has been good to you. It’s a special kind of lovely to be able to take care of the person who brought you into the world.

You know, my dad and I used to go to the movies together. We’d go to dinner and to the movies. He loves movies. He loves music like I do. My mom and dad were divorced when I was young. My greatest memory is we went to see The Five Heartbeats (directed by Robert Townsend), and it was the only time in my life that a movie was so good that we watched it, went back out, paid, and watched it again. We watched it two times in a row in the theatre.

The Big Fib debuts on May 22 on Disney+ and Big Shot TBD.