Zari is the focus as the Legends of Tomorrow do the Groundhog Day-style episode that every CW/WB show is apparently mandated to do. Charmed pulled a Groundhog Day twice, in 1999 and 2005. This iteration did make some headway into the lives of the ensemble crew of the Waverider, leaving us with so many surprises. Here are the 5 major ones that you need to know about before heading into next week.

Zari quickly finds out that only she is stuck in a time loop, triggered by an explosion. Time resets and lasts the only hour before the explosion plays out again. She relives the same hour over and over again. During her early time in the loop, Zari clashes with Sara in a fight that gets no further than raised voices. Ray stops things, reminding everyone that Sara can’t get angry. However, he is the only one who knows why. Zari gets him to spill the reason eventually, and we find that Malus is waiting inside Sara. The moment she loses control, the demon is unleashed on the ship, endangering the crew and their mission. The real surprise is that Sara already knows this and fully expects the team to “take care of” the demon no matter what it means for her own safety. Let’s just hope everybody is overreacting.

So, I know that last week I almost abandoned my long-term support of the Amaya/Nate coupling. At the time, Nate seemed to be all up in Amaya’s business, like she needed someone to protect her. The woman could whoop Nate’s steel self without breaking a sweat! It was infuriating that his interference got in the way of Amaya and Kuasa’s important moment. When I was the two of them in all kinds of love in this episode, I melted.

Despite their bickering and feigning unease, Amaya and Nate are in love and unable to resist one another. I know that they are trying to get out of the way of fate, making way for Vixen. It doesn’t have to be so. The couple needs a lesson in melanin and Black genetics. Then, they can see that Nate could very well be the baby-grandaddy of the ebony assassin Kuasa and her sister Vixen. This knowledge would relieve a lot of their stress and prevent the distractions their rendezvous are becoming to the team. Zari stumbles upon their…escapades too many times for the feelings to be denied. 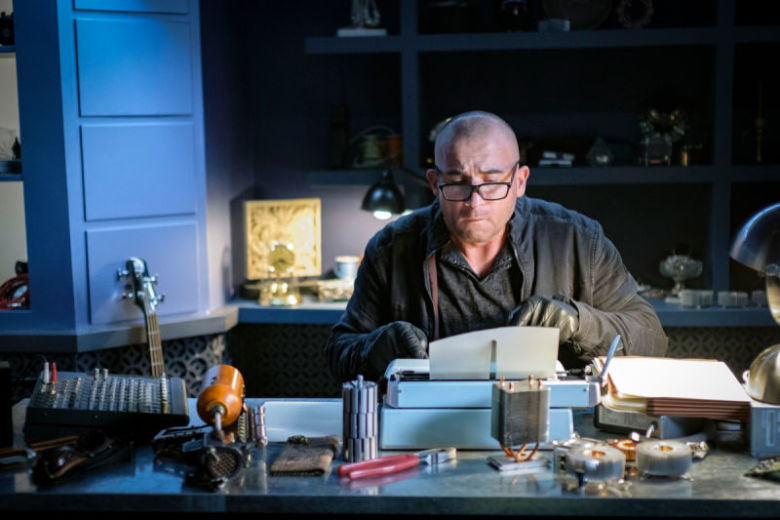 While Zari is searching the ship to find the source of the explosion, she stumbles upon a curious sight in Rory’s room. He’s hunched over the typewriter pecking out a bodice-ripping tale on an old typewriter. We hear the story is narrated in the big anti-hero’s voice, but it’s still hard to believe. Rory has belittled any romantic coupling or insinuation of a coupling since the show began. He really went after Leo/Snart for his love of a man on Earth X. Rory is the resident grump, who comes through in a fight and is handy when the team needs heavy lifting. He is NOT the person you think of for historical drama. Let’s hope there is more to this story as the season winds down.

The time loop comes to a shocking end once Zari finds the bomb and isolates herself to detonate it. Turns out Gideon orchestrated the entire loop sequence and it was all in Zari’s unconscious head! The brain of the Waverider manifests as a brunette British woman who uses sarcasm and manipulation to justify her actions. She did it all to prevent Zari from leaving the team because there was no way that the computer could figure that the team could defeat Malus without Zari. Okay, Gideon’s intentions are good, but her methods are downright devious. Zari dies in an explosion countless times before she is freed from the loop. Then, once she truly awakens from the unconscious state, Zari tries to tell her story to the team, but Gideon feigns ignorance like she don’t know what the girl is talking about! That’s cold.

After the episode appears to end, the scene changes to a temple of the monastery. We see Wally West, from The Flash sitting under a gazebo with his legs crossed and eyes closed in meditation. That zen mode is broken when a figure pops out. Its Rip and he’s there to retrieve Wally. He tells the man that the team needs them. We should find out more next week.

The surprises in this episode should be revealed even further as the season winds down to the spring finale. At least, I hope so. Otherwise, we are left with way too many loose ends, and that’s not the Legends‘ style.