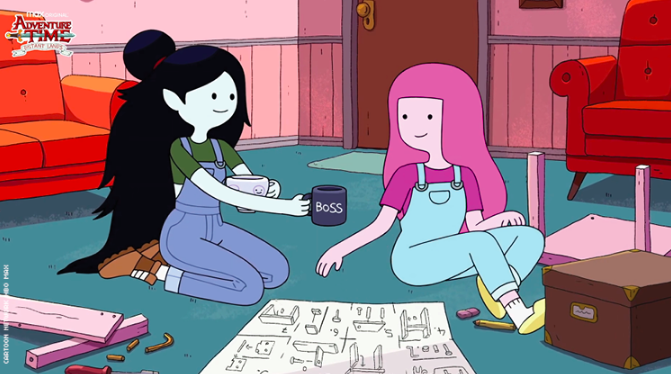 For years, Cartoon Network’s Adventure Time, created by Pendleton Ward, gave fans iconic episodes that not only set the highest standard for animation, but also character development, story, and music. The characters that audiences came to know and love weren’t just imaginary, as they could be seen and felt within everyone’s lives.

A cartoon seldom has the power to evoke such powerful ethos and emotion all while simultaneously making us laugh and contemplate social constructs.

However, Adventure Time was the catalyst for more groundbreaking cartoons to emerge with a newfound depth. It’s not just a show for entertainment — it’s an experience that continues to ignite imagination and boundless ambition.

Shows like Steven Universe, Infinity Train, Hilda, OK K.O.! Let’s Be Heroes, Avatar: The Last Airbender, and more have changed the way that people consume cartoon media and added a unique kind of soul that few shows have ever achieved. They push boundaries and tap into notions that challenge societal norms in ways that both children and adults can identify with.

So, when viewers were treated to the announcement of Adventure Time: Distant Lands with some exclusive teasers during last year’s Comic-Con@Home and then blessed with the first two episodes airing later in 2020, there was a lot to talk about.

Already such beloved characters in Adventure Time, Princess Bubblegum and Marceline have established an incredibly passionate and devoted fan base both as their characters and in real life. Olivia Olson (Marceline) and Heidi Hynden Walch (Princess Bubblegum) have had people gushing for years, particularly with their adorable dating history and complicated, yet amazing relationship. With Olson’s sultry and rich emo vampire tunes to Hynden’s genius yet often chaotic portrayal of everyone’s sweetest princess, the two have always had the makings of a power couple.

While fans were given some hints and showrunners clued everyone in that the two used to date, their romantic relationship is finally explored on HBO MAX, as Cartoon Network may have found the depiction of a gay relationship a little too provocative for kids.

Fortunately for audiences, HBO MAX delved into the beauty and complexity of their relationship with a phenomenal episode full of new story, resonating music, and some totally dote-worthy moments.

This hour-long special embarks on a deep-dive adventure through more of Marceline’s past and the complications within her relationship with not only Princess Bubblegum, but also with her ability to express and receive love in general. The trauma of Marceline’s life is examined throughout the original series, with many flashbacks and references to her past with Ice King and even her mother.

However, there were still several gaps in her past that viewers looked forward to uncovering. “Obsidian” delves into some of Marceline’s darkest memories and why certain conflicts with Bubblegum are heightened by her own unresolved emotional neglect. The show has historically handled issues of mental health very well, and this episode only continues that successful track record.

This episode also explores Marceline’s struggle to come to terms with herself as a vampire who appears to be stronger than she actually is. When audiences add her intersectional identity as a vampire, part Black human, and an orphan, it’s clear to see that she is still in the process of healing.

Her supernatural powers help to provide her with the persona of “being okay,” when her past creates an overwhelming vulnerability that Bubblegum seems to be one of the few people to see. “Obsidian” illustrates how relationships can become complicated and even toxic when people attempt to walk away from psychological scars rather than working with themselves and their partner to resolve them and support one another.

Both Marceline and Bubblegum try to hide their insecurities. Marceline doesn’t want to be honest and open because she is terrified of losing Bubblegum the way she lost many people that she’s loved. Bubblegum struggles to admit that she’s jealous of Marceline and wishes she could impress and connect with people the same way. Often finding leadership challenging, Bonny just wants to feel valuable. They are simultaneously determined to conceal what they view as monstrous qualities inside of them, but the show expresses that having emotional complexity and trauma doesn’t make someone a monster — it makes them real.

The episode also dispels the false glorification of perfection through the shattered character Glass Boy. Growing up in the Glass Kingdom, it’s viewed as ugly, disabled, and grotesque to be shattered or scratched. However, the episode concludes that everyone is in fact shattered in different and unique ways, and it should be embraced. Fans learn that Glass Boy isn’t the only shattered one, but he was the only one brave enough to show his flaws. This highlights the way in which people spend so much time and energy trying to achieve the image of stability, and even superiority, to alleviate their own internal suffering and self-destructive thoughts.

Basically, this episode is great medicine for the mind on top of some very funny and exciting moments. It’s real, it’s raw, and it’s gold. It reminds us that we can go through life hiding ourselves and feeling lonely, or we can come to terms with our flaws and process our trauma.

Marceline and Bubblegum don’t magically resolve all of their problems, but they take the first steps to talk about them and face their own feelings of monstrosity.

Following the events of Adventure Time, fans learn that Marceline and Bubblegum are together again, but it’s not all roses and daisies. While they seem to be in a more honest place, there are things that Marceline isn’t comfortable sharing with Bubblegum and vice versa.

The mission to save the Glass Kingdom again brings back difficult memories for both of them as they recall their painful breakup and some triggers from the past. The couple reverts back to their previous coping mechanisms and are torn apart. “Obsidian” thoughtfully explores how couples are often thrown back into old bad habits when unexpected triggers come into play.

Although both are stubborn, taking time apart to think helps both of them to understand the source of their frustrations. It’s apparent that they both face trepidation when it comes to admitting that they are at fault in different ways. This moment reflects that often painful process of growing and changing for the better.

The show doesn’t over-accentuate them being two women in a romantic relationship, which is refreshing. It’s not about them being gay, it’s about them as two people navigating their lives together. With that said, the HBO version doesn’t leave us hanging when it comes to the romance either. Not only do we get a heartbreakingly wonderful and hauntingly beautiful song from Olson but we are also graced with an adorable (and long awaited) kiss between Marceline and Bubblegum. It’s a moment that solidifies the fact that it should be okay to normalize same sex, trans, and non-binary relationships everywhere, including cartoons.

From the iconic fan cosplays and artwork to the heated Marceline and Bubblegum debates and discussions, it was a moment for the TV history books and it was amazing.

“Obsidian” is the most recent episode of Adventure Time: Distant Lands on HBO MAX. Fans are eagerly awaiting the announcement of their next adventure.