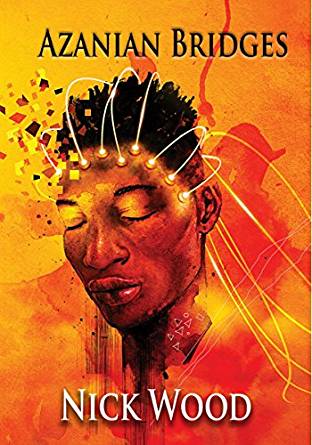 Set in a current South Africa that still enforces Apartheid, Azanian Bridges is, despite some flaws, a striking read with hints of Brazil. Though most political utopias tend to give a sense of relief (as in “Thank goodness it didn’t turn out that way!”) with a slight warning for times ahead, it almost feels as if this very topical sci-fi novel arrived slightly too late for our world’s current state of affairs…

Sibusiso is a young Black man who lives in South Africa in our time. But Apartheid still exists in this South Africa. After a freedom rally where one of his friends is shot by the police, he experiences P.T.S.D., and he is sent to a mental institution. There, a white psychologist, Dr. Martin van Deventer, has an empathy box that enables a sharing of thoughts and emotions between two persons. He offers Sibusiso to try it as part of the therapy.

What I remember of Apartheid, when I was in my early teens, are some images on T.V. and a deep sense of outrage. The novel brought it all back, but it was even more striking evaluating it as an adult and in the current political context. The Apartheid vocabulary and the situations are all there. Azanian Bridges lays bare the deep racism and injustice of South Africa during Apartheid and invites the reader to look warily at some countries’ recent political decisions.

The message is pretty clear.

The empathy box is nicknamed Pandora’s box, which in Greek mythology held hope. The novel asks us to build bridges and to forge empathy links with our fellow humans whatever our differences because there lies our only hope as humans at being human(e)s. And if we really need Dr van Deventer’s box to be it, we are in a much sorrier state than I already thought.

Azanian Bridges alternates first person narrators: Sibusiso’s point of view and Martin’s point of view. Though I’m tired of this narrative device, it was perfectly called for here as it puts into relief how both men experience the same events differently: one as a Black man in a racist and segregated country who is also a patient and the other as a white man who thinks of himself as less racist than he really is and as a doctor. It reveals the unequal relationship but also Martin’s naivety, Sibusiso’s bleak despair, and how one slowly gains something of the other, while the reader may feel wary of a psychologically troubled first-person narrator.

The characters felt more like symbols of what the writer tries to convey (and succeeds at conveying) than characters that became flesh and bone. I’d have liked the mythological aspects to be more developed to add depth to this symbolism. But the novel relies more upon its architecture with the alternate points of view rather than upon any literary tour de force. And because the novel has a powerful message, its awkward aspects felt secondary to me.

Azanian Bridges is a novel that grows on you rather than having you exclaiming “wow!” at once. Though I’m usually more attuned to the depth of the characters and of the storyline, it was the novel’s themes here that struck me the most. Sadly, very sadly, it’s a book that should–must–be read now more than ever.

Azanian Bridges has been shortlisted for the 2017 Nommo Awards.