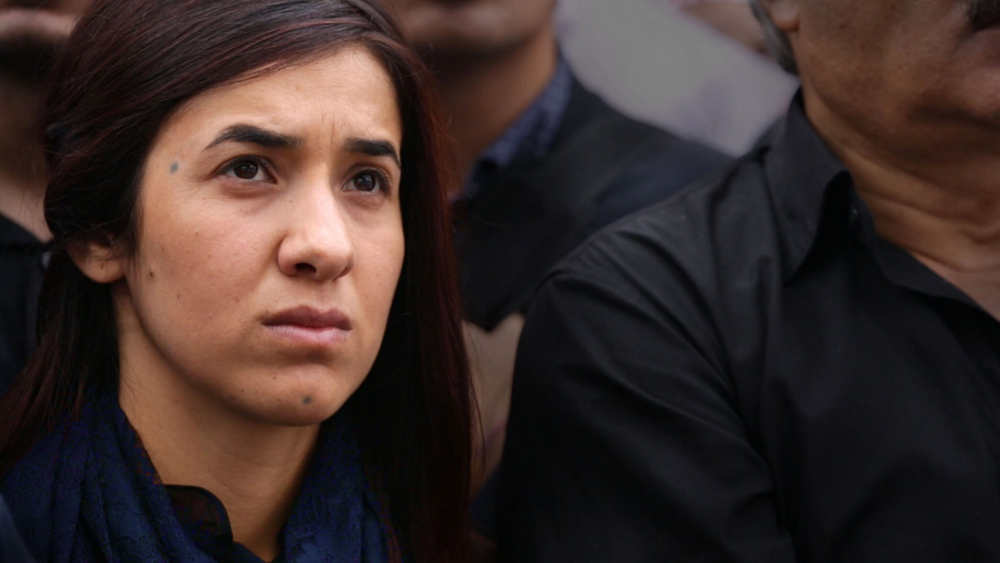 When you watch filmmaker Alexandria Bombach’s poignant documentary, On Her Shoulders, you’re reminded that two worlds exist simultaneously. There is one world, that of a young girl, fifteen probably younger, who lives in Sinjar, Iraq under ISIS rule and law. She is their sex slave. Her mother and father are dead, her brother dismembered and lifeless. Her sister lies in a bed beside hers. Then, there is the second world, the one that you live in —in New York City or in Atlanta, or wherever you are as you read this review without an immediate or direct threat of death or violence.

Such is the world I also inhabit as I write here in sunny Los Angeles. Whether on visits to refugees in Greece or in Berlin, New York or Ottawa where she meets with world leaders, the film’s protagonist, Nadia Murad lives in a space that encompasses both of these two worlds. She is an activist, as well as an ex-prisoner of ISIS (or “Daesh” as she calls them, the Arabic acronym for ISIS). 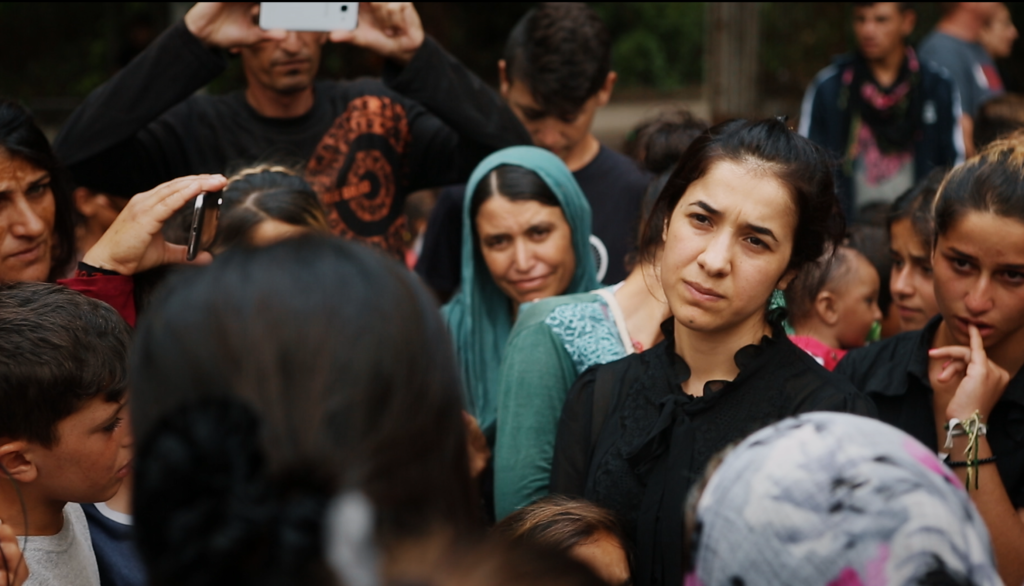 Our Worlds Collided Once

Nadia’s life and mine first collided in August 2014 when I lived in Paris, France. There it seemed everywhere I looked daily reports recounted how ISIS forced Nadia’s people, the Yazidis—a religious and ethnic minority from Northern Iraq—to flee their homes in the lowland villages for the Sinjar mountains. Those who could not escape became the property of ISIS. Thus began their genocide of the Yazidis.

I am ashamed to say that after 2014, I did not think twice about that community. I am grateful, however, for On Her Shoulders because it is a well executed, captivating work of art that has brought Nadia’s world and mine together again. In fact, it is a film ultimately about one universal human emotion — love. Nadia’s fierce love of community, family, and home and her fighting determination to see them all survive, even if it costs her, her life.

The Love is in Her Activism

Early on it becomes clear how a profound love is at the heart of Nadia’s activism. She subjects herself to an inordinate amount of interviews desperate for the world to know what still happens to the thousands of other women and girls left behind. And when reporters ask about her pain, her trauma, her struggle—about the rape and violence she endured, when they ask about her new fame, she mourns. She seems riddled with guilt at the focus and attention put upon her. Instead, she wishes for it to center the women who still suffer. 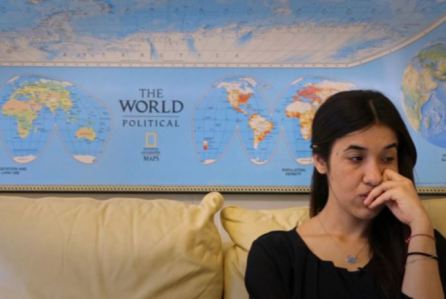 Her Journey Here is a Horror Story

Director Bombach supports the recent Nobel Peace Prize winner’s ambitions and crafts a film that focuses on Nadia’s work. As the audience, we do not learn the gruesome details of how exactly she was captured or how exactly she was tortured and raped, or even how she and the other women lived while in captivity.

But, we learn that eighteen of her family members were either killed or enslaved and little girls as young as age nine, were sexually assaulted. We discover that her three nieces are still prisoners. Rather than the horrors Nadia has been through, the documentary mainly explores how she lives now. It examines the work she does for other victims and survivors, as well as her resilient efforts to support and unite her community.

The Ambassador for Survivors

Privy to pivotal moments in Nadia’s political activism, viewers observe her at the UN headquarters in New York urging officials to take action:

“You are the ones who can bring hope or create suffering. You are the ones who decide if a girl like me from another part of the world can continue her simple life. The world only has one border the border of humanity. If beheading, taking women as sex slaves, raping children and the displacement of millions will not move you, when will you move?” she says before members of various states.

In the same building while her famous lawyer, Amal Clooney, is beside her Nadia becomes the United Nations’s first-ever Goodwill Ambassador for the Dignity of Survivors of Human Trafficking. She later frequents Yazidi refugee camps in Greece and attends a memorial rally in Berlin on the anniversary of the genocide. She meets with policymakers at the House of Commons in Ottawa. There she also does radio interviews. She receives regular death threats but continually exposes herself to share her story.

A Person You Will Never Forget

The best scenes are where Nadia is alone in front of the camera, she wears black and sits in a dark room. We see her face. We see her mouth quiver, her eyes wet, and hear her voice shaky but intact. And though throughout the picture there is the constant sense that at any moment she might break down, she never does. “To those who thought that by your acts you could destroy her, know this, Nadia Murad’s spirit is not broken,” said Clooney in 2016.

On the contrary, with every new battle, it seems a fire inside the woman is set ablaze. As you watch this documentary the flames alight in her heart set upon you as well, her world collides into yours. At the end of those brief ninety-four minutes, after you bear witness to her struggle, you make a choice to be inspired, never to forget.

Utibe Gautt Ate is a Black Cherokee and Nigerian writer and artist. Her background is in postcolonialism and race, as well as photography. Utibe’s writing and artwork have been exhibited in Paris and Los Angeles.