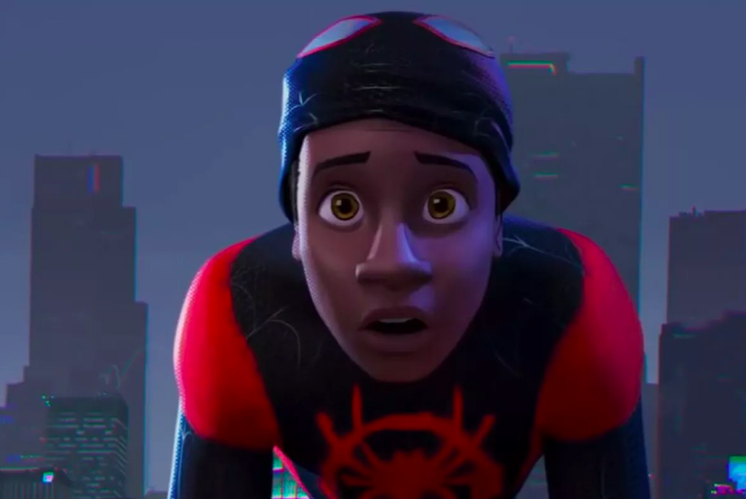 Welcome to the silver screen, Miles Morales! Spider-Man: Into the Spider-Verse is an amazing sight to behold. This film is easily in the top 5…dare I say top 3 out of all the movies that have come out in 2018. It’s definitely one of the best comic book films ever. The animation and soundtrack are fire.

It is truly one of the greatest animated films I’ve seen in a long time.

Spider-Man: Into the Spider-Verse is about Spider-Man finding out he’s not the only one. The film starts off with Peter Parker trying to destroy a machine created by Kingpin and dying in the process. In the wake of an absent Spider-Man — chaos ensues as the machine rips through multiple dimensions, bringing along with it multiple spider-people. Miles’ story starts when he is in subway tunnels creating art with his uncle (Mahershala Ali). He gets bit by a glitchy spider and his origin story begins.

The creators of this film knew what they were doing with this comic book film. It’s animated but it’s a match for all ages. It combines the current trends that inspire and attract a young audience while also giving the adults in the crowd something to reminisce and relate to. 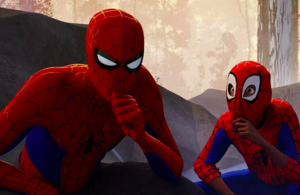 Directed by Bob Persichetti and written by Phil Lord, Spider-Man: Into the Spider-Verse is a colorful nostalgic roller coaster ride. The use of 3D animation and bright colors make it an immersive experience; like you have stepped right into the pages of a comic book. The “BAM’s”, “ZAPP’s”, and “Clackety-Clacks” of the comic book world showing up like comic strip dialogue boxes is genius. It’s in your face in some points and in little corners as sound effects in another. The amazing animation is brought to life even more with a killer soundtrack which includes songs from artists like Post Malone and Swae Lee. It’s fun and totally in tune with Miles and the teens of today.

The writing is stellar, and the jokes are on point. There were times when Miles embodied my little brother, my cousin, or that one kid at school. The overall production is top notch.

Spider-Man: Into the Spider-Verse gives you that warm, fuzzy feeling you get when you remember something fondly. The film gives you the past, present, and future of Spider-Man and it’s nothing short of awesome. It’s the best parts of Spider-Man wrapped into one fine-tuned package.

The voices of the actors couldn’t be more perfect for the characters. There is a new Spider-Man family and I am here for it. Shameik Moore as Miles Morales is spot on in my book. There is an energy he brings to the character that is fun and makes me think this is what he’s like in real life. Jake Johnson as Peter Parker is the mash-up I have never thought of, but completely love. It’s a cool combo of Nick Miller from New Girl and Ryan from Let’s Be Cops morphed into a Peter Parker we can all rally behind.

Hailee Steinfeld as Gwen Stacy and Nicolas Cage as Spider-Man Noir make for some snarky yet amusing moments. We can’t forget about Spider-Ham voiced by John Mulaney and Peni Parker voiced by Kimiko Glenn. All together, they are the Spider-dream team. Liev Schreiber as Kingpin is scary good. He’s larger than life and delivers a great portrayal of a well-known villain. The old and the new come crashing into the same space and it’s brilliantly executed.

To be clear, it’s the best Spider-Man I’ve seen. 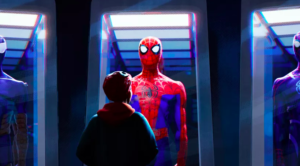 What makes Spider-Man: Into the Spider-Verse such a standout film is the attention it gives to the story beyond the storyline of “person bitten by a radioactive spider”. It becomes a story that is less about the spider and more about the person behind the mask. The idea presented in the film is, “anyone can wear the mask”. It really is a story about family, friendship, and using those relationships to find your own strength.

The attention given to developing Miles’ home life versus his school life versus his street life makes for a fully rounded character you can’t help but love and root to succeed. Miles, with his family and school situations, are so relatable. It’s super smart and totally refreshing.

This is also a father and son story for the ages. It’s a Black father trying to protect, connect, teach, and love his teenage son. It’s complicated. It’s dramatic. It’s real. It’s a teenager trying to find his identity and steer clear of the life of his father. Miles steer as far away as possible, to the point where he has attached himself to his uncle who doesn’t have the best relationship with the rest of the family. 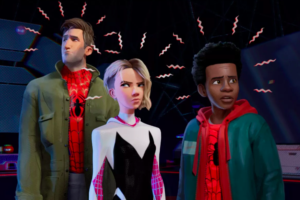 The family dynamics may have some tension, but there is always love no matter what. That’s the important message. We can all learn a little something in this film, just as the characters do.

I look forward to seeing what this new cinematic multi-spider-verse has to offer. Sony has something unique going for it and I am here for the ride. Make sure you catch Spider-Man: Into the Spider-Verse in theaters December 14th.

And make sure you stay for the post-credit scene!