When toys are adapted into film or television they are usually positioned as an obvious cash-grab. Whether it’s Care Bears, G.I. Joe, or Transformers, this is how business is done. That is why the original Lego Movie was such an unexpected surprise, being substantially more than an extended advertisement for a 70-year old set of building blocks, and delivering an enjoyable, neo-sincere CGI cartoon about a cog in the machine going rogue; a kind of The Matrix meets Brazil on the Island of Misfit Toys. Within that unexpected success squawked a well-worn side-character, in Will Arnett’s performance of the Batman.

Whereas the first Lego film hinged on a dramatic conversation – between adults coveting antiseptic formalism in conquest of their misspent youth and their imaginative progeny tumbling the cordons of dad’s basement childhood museum – The Lego Batman Movie dispenses with most of these “real world” conceptual experiments. There still remain subtle allusions to Lego Movie, including a reference to the mysterious abyss under the “table” of the city, and the mantle of “Master Builder” (which is itself a weird in-jokey reference to the real-life Lego community), but overall, The Lego Batman Movie takes place entirely in-universe, and it’s all the better for it.

For those of us who saw The Lego Movie but still possess some reasonable suspicion of doubt, best believe that Chris McKay’s cinematic debut handily wrings 100 frantic minutes out of this new characterization to considerable rewards. This is no small feat, especially when the film appears to blow its pacing in the first act, but that’s all misdirection. Still, properly digesting its contents may require a predilection for zanily unrelenting action-figure hysterics, wherein you can practically imagine unseen sugar-fed children in the background going “crzhshhhhsh” as they bash their playthings together.

The story is thus: Bruce Wayne is the vigilante hero Batman, beloved and admired in his Lego-town of Gotham City. He punishes the mischievous baddies, often corralled into illegal escapades by the Joker (Zach Galifianakis, endearingly earnest, maybe-probably better than Leto). Batman beats them all with one hand tied behind his back, all the while gratingly singing along to his newly penned rap-metal ballads. The pathos here is that the Joker really wants a meaningful connection with his nemesis, desperate to be singled out for Batman’s scorn, which is joylessly denied.

The routine of Batman’s reindeer games gets thrown out of wack when Commissioner Gordon retires and elects his daughter Barbara (Rosario Dawson, we’ll come back to this) to clean up Gotham by forging an alliance between the police force and Batman. This bears a deliberate mirror to Batman’s rebuff of the Joker, as our hero again stubbornly refuses to align himself with anyone else. Commitment issues are apparent, but the melodrama that ensues actually takes its time probing beneath the surface.

The center of the film becomes – in all seriousness, really – a character piece on Batman, who must learn to get along and work with others for purposes of synergy and emotional growth. While this is well-trod territory, it’s swallowed up in the same cavalcade of cameos and bon mots that proved so mysteriously effective in The Lego Movie. That Arnett is able to make his character’s po-faced humor work more often than not is admirable. His effortlessly gruff voice might have something to do with that – because this Batman is an insecure, self-absorbed, relentless manchild of the highest order. 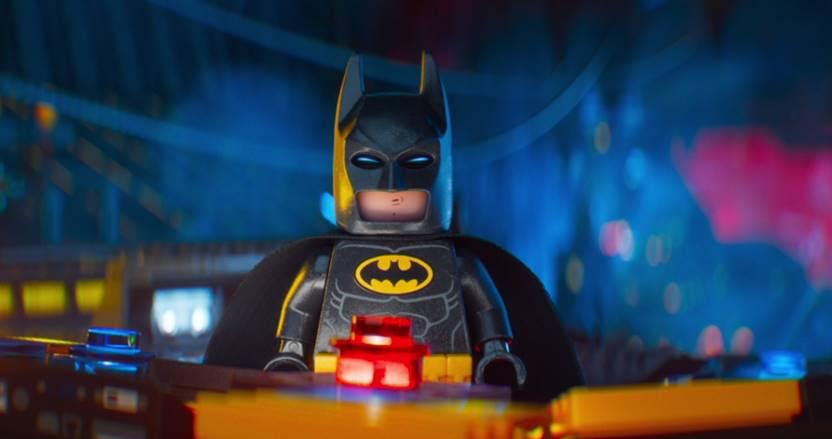 This aspect is the one that proves most fascinating: Lego Batman presents an almost poisonous dressing-down of the icon, informed by contemporary interrogations of the character’s inherent absurdities. Yet, the emotional pain and neediness evinced in this rambling, idiotic, yet competent hero approaches a Confederacy of Dunces-level of awkwardly affectionate mania. No one in Gotham, not even the Joker himself, comparably lacks the self-awareness of the titular hero, who is so firmly driven into his own posterior that he cannot comprehend that he might be damaged by loneliness.

This character flaw gives way to hilarious, drawn out beats where Batman, for instance, eats Lobster Thermidor while wordlessly lounging alone in his Batski, each bite echoing crisply throughout the silent Batcave. I found myself laughing as much at these clunky ruminative scenes as I did at the otherwise 10-joke-a-minute jogging speed of the film. But even when the melodrama overstays its welcome in drawn-out dialogue, it never totally misfires, either.

Surprisingly, the classic Crime Alley origin is not re-told (with a PG rating, it could’ve gone for it), but deconstructing the Batman without the pallor this would’ve cast on the story suits the feel of it better. It’s an example of the cultural twists Lego Batman smartly selects from, a topic which could not pass us by without mentioning the casting. Rosario Dawson is Barbara Gordon/Batgirl, Mariah Carey is the mayor and, in a nod to Tim Burton’s Batman, Two-Face is voiced by Billy Dee Williams. Barbara Gordon as a woman of color? Zoe Kravitz as Catwoman? While I wish the live-action films were even more boldly progressive in their character choices, I appreciate what they’re doing here.

Where the film doesn’t work for me (thirty-something, childless) is in its musical interludes, which are tiresome and overlong. I’m fairly certain that most parents will grit their teeth through them, loathing the urged purchase of the soundtrack later that evening. However, those same parents will find themselves hypnotically absorbed by the copious references and anecdotes.

When the Joker lists the bestiary of Batman villains he’s gathered up for a preliminary rumble, a hapless character remarks, “Wait, you’re making some of those up, right?” Many parents (and some savvy kids) will know full well that he is not. In the interests of avoiding spoilers, I won’t name every character that comes out of the woodwork, but just be aware that the film gets a lot of different play sets to build with, allowing for such inspired double entendres as an airplane being set upon by actual Amblin Gremlins. I would venture that most kids won’t get that visual pun at all, but their parents (and us nerds) will love it.

The Lego Batman Movie is going to be a different beast on Blu-ray/DVD, where we’ll be able to pause frames and tirelessly collect the numerous visual Easter eggs to be missed in the theater. Lacking that ability for now, we can still revel in its best moments, an experience distilling the anarchic but benign violence of the branded Lego video games with the absurdist quip-rhythms of Leslie Nielson’s oeuvre. If a Warner Bros. movie is willing to shoulder-punch the decided artistic failure of Suicide Squad, you’ve already won me over.