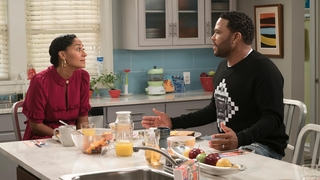 “Please Don’t Feed The Animals” is the seventh episode of black-ish. As is typical for this show, they don’t shy away from topics that make many people uncomfortable, especially those who want to live with their heads buried in the metaphorical sand.

“The degree of civilization in a society can be judged by entering its prisons.” – Fyodor Dostoyevsky. With images of incarcerated Black men and Akon’s “Locked Up” playing in the background, Dre recites the sobering statistics of those who have been and are currently held in prison:

With the steady increase of Black men and women being put into the system, prisons are filled to capacity. In this week’s episode of black-ish, one of those inmates is Dre’s god-brother, Omar. When Omar collect calls, Dre rejects the charges. When Bow questions her husband’s dismissal of Omar, Dre tells her that she talks to Omar enough for the both of them. Apparently, Bow and Omar have a very close phone friendship, one where she describes Beyoncè music videos and the taste of her wine of the month.

Bow says she’s just trying to make Omar’s time in prison easier, but according to Ruby, it’s not supposed to be easy. How does she know this, you ask? Because she was on the inside.

Yes folks, Ruby was in the clink (and I’m honestly not surprised). Junior overhears this crucial information and when she denies it, he assures her he can handle the truth because he shaves twice a month (HAHAHA, dis chile). See what had happened was Ruby blew up one of Pop’s boats back in the day, and was charged with committing an “aquatic crime” and got thrown in maritime jail. Junior thanks her for sharing the experience and naively assumes she learned a positive lesson.

Junior have you met your grandmother?

While Jack and Diane are trying to come up with a new hand shake (Twin-Shake, *budum tsss*, I’m here every week folks), Dre tries to get advice on the Bow/Omar situation at work. Mr. Stevens agrees with him because, as he sees it, “regular people” shouldn’t associate with “animals”, but just watch them through glass. (Whew, when he said this I got this weird feeling in my stomach, I’ll explain why later). Dre points out Stevens’ hypocrisy because he hired a guy named Darrington straight out of prison, but of course Darrington is white and committed a “white collar” crime. Whereas Curtis’ cousin got locked up for five years for having the same amount in crack. As Charley and Curtis point out, when it comes to Black people, drugs are considered “dirty”, and the justice system operates to unjustly incarcerate Black people for the same crimes that white people do.

When Dre gets home, Bow shares the exciting news that Omar is being released due to the efforts of the Innocence Project. As Dre and Ruby make plans to welcome Omar to the house, Bow’s expression changes from excitement to trepidation. Home girl realized that she’s not too excited about an ex-con sharing the same space as her and her children. Sure, he was fun to talk with on the phone, but having him live with her is a completely different matter, and tells Dre in no uncertain terms that Omar isn’t moving in.

Dre expresses his disappointment in her, because she should understand how he feels; Dre’s scared that if Omar doesn’t have a support system he could end up like Kalief Browder. Later, realizing that she may have been hasty in her judgement of Omar, Bow meets Dre at the diner where he’s waiting to meet Omar. She apologizes for not being supportive, and Dre says he understands, but it’s his job to be there for Omar since he has no one else.

Though it may not have been the intention, when Stevens made the comment about prisoners being kept behind glass, I immediately thought of the Black people and other people of color, who were kept in ‘human zoos’. During the late 1800s to early 1900s (even as late as 1958), human beings—indigenous people from Africa, Asia, South America and Native Americans—were subject to horrible conditions. And just like with these traveling side shows, Black people are once again being kept in cages that benefit and create profit for white supremacy. Yes, many people are in prison for crimes they did commit, but a lot of Black people have been made to serve unnecessarily long sentences, and it is to the benefit of ‘for profit prisons’.