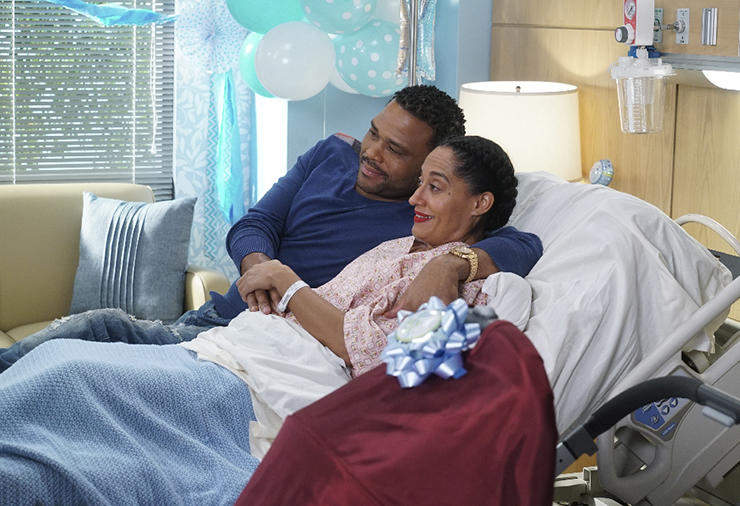 “Sprinkles” is an apt title for the season three finale of Black-ish, conjuring up images of cupcakes, balloons, and blissful children. It’s this sweet sentiment that runs perfectly through one of the show’s most personal episodes, peppering in sarcastic comments of the Johnson family as Bow faces pregnancy complications.

We find Dre (Anthony Anderson) and Bow (Tracee Ellis Ross) in a fairytale stage of sorts when the episode begins.

“Since the dawn of time, every culture has celebrated the coming of a new baby. All those celebrations had one thing in common: they were ladies only, and that was cool with me,” Dre’s voiceover says.

As the Johnson family eagerly awaits the arrival of baby Devonte, Bow invites Dre to a co-ed baby shower. Initially reluctant, he does a swift 180 when they arrive and see soon-to-be-dads chugging beer while soon-to-be-moms egg them on. Dre enthusiastically yells “Tacos and drinking games! Yes!” before running off like an overzealous kid. After attending two showers, he has the idea to throw Bow the ultimate co-ed baby shower in the dope way that only Dre Johnson can.

Bow’s brother Jonah (Daveed Diggs) comes into the kitchen just as Dre and Bow are discussing the baby shower and asks if they’re going to have a “sprinkle.” Dre, with confusion and annoyance coloring his tone, asks “what the hell is a sprinkle?” Jonah, full of infinite wisdom, says “people think it’s gauche to have more than one baby shower, so instead call it a sprinkle. It’s a light rain instead of a downpour.” Dre then declares that he hates Jonah, shocking absolutely no one.

Of course, Ruby (Jenifer Lewis) and Earl (Laurence Fishburne) have to add their two cents: baby showers are for cash. “A shower is not about gifts. A shower means you shower the baby with love,” Dre insists. His self-assured smile fades as Jonah, Ruby, Bow, and Earl all laugh at him.

They laugh out of love, I assure myself.

In the living room, the Johnson children look over their mom’s baby registry. Diane (Marsai Martin) realizes the shift in family hierarchy: “I’m going to be the middle child now. I’ve heard middle children can get mean,” she laments. In another of Black-ish’s brilliant, self-aware family comedy moments, Junior (Marcus Scribner), Zoey (Yara Shahidi), and Jack (Miles Brown) all turn to stare at her.

Jonah arrives and suggests that the children get her something from the heart. Diane decides to write a card (which Jack will then add his name to) and Zoey resolves to knit something (“Things come easy to me; why would knitting be the exception?” she asks). Junior, in true Family Black Sheep fashion, confidently says “I’m going to give the baby the greatest gift of all: support. That is not dad’s strength, so I will be a strong male role model so the baby doesn’t have to trek through the emotional desert that is Andre Johnson.” His self-assured smile fades as Jonah suggests a gift card instead, while Zoey, Jack, and Diane nod in agreement.

They’re suggesting a gift Junior can actually provide, I assure myself. (In my opinion, Junior is better at being an unabashed nerd out to prove a point than he is at emotional labor.)

Dre and Junior’s frank discussions of emotion are modestly dismissed by a family whose sentiments are best expressed through heartfelt actions and sarcastic comments. Underneath, however, there’s consistently a running theme of emotional vulnerability to the show, and that’s where Black-ish shines (for example, see season 3 episodes entitled “All Groan Up” and “Liberal Arts”). This episode’s parallel father-son interactions make up part of the episode’s heart.

The other half of the heart of “Sprinkles” emerges when Bow finds out that she has preeclampsia, a condition that she tells Dre has been linked to the age of the mother. Although the baby would be two months early, the doctor tells Bow and Dre that she has to be induced.

Dre, shaken, calls Pops to let him know and requests that he not alert the kids. Slim chance, right? Of course, Pops does just that: “That was your daddy. He wanted me to pretend that everything was okay, but it’s not. Your mama has a serious medical condition.”

Cut to the hospital, where the rest of the Johnson family shows up, much to Dre’s confusion. (Heartfelt actions right there.)

And Pops’ defying Dre’s request for secrecy turns out to be a good thing. Bow ends up requiring an emergency Caesarean section, so it’s great that the whole family is there for support.

A successful C-section is performed, and little baby Devonte enters the world a full two months early. As he’s whisked off to the Neonatal Intensive Care Unit (NICU), where they perform tests to ensure the health of (primarily) premature babies, Dre feels a sense of impending doom.

Bow urges Dre to check on baby Devonte since she’s stuck in bed, which he does—after stalling by calling Bow’s family and proceeding to give her an in-depth update of each one. He’s entirely terrified that his newborn baby will not survive.

“What if I fall in love with that baby, and he breaks my heart?” Dre asks Pops.

“Look, I can’t guarantee you everything’s gonna be alright, no one can,” Pops replies. “But I can promise you this: if you don’t get in there and spend every moment you can with him right now, you will regret it. Hey, that’s your son in there, he needs you. You need to go on get in there and be his dad, ya hear?”

With those words and a hug from Pops, Dre heads in to meet baby Devonte, while the rest of us have to wait until season four.

For sure, the greatest emotional triumph of this episode goes to none other than Ruby (I know, I can hardly believe I typed that either) during a truly rare moment of thoughtful emotional intimacy with Bow. Ruby goes to be by her side. “What’s wrong with this damn hospital? Someone get my daughter a blanket?” Ruby hollers, upon finding Bow abandoned in a hallway.

“Uh, did you just call me your daughter?” Bow asks.

“What? No, no,” Ruby says. “The high blood pressure’s making you hallucinate.”

Amid the ringing phones and everyday hustle of the hospital, Ruby then kisses Bow on the forehead. “You hallucinated that too,” she says.

Although the episode was narrated by Dre, I would’ve liked to hear it from Bow’s point of view. Even so, the cast acted their butts off, delivering an immensely intimate storyline with grace, humor, and family values.

“Sprinkles” captures Black-ish’s signature blend of hilarity and emotional sensitivity while tackling one of the show’s toughest, most personal plot lines yet, without leaving the viewer feeling shortchanged—all within its 30-minute timeslot.

You can catch Black-ish again when it (thankfully) returns for season four on ABC!

Diondra Powers is a contributing writer and social media correspondent for Black Girl Nerds. She finds great joy in volunteering and exploring the world through a camera lens. In her spare time, she embarks on epic adventures that take many forms—from reading to climbing to Dungeons & Dragons. Find her on Twitter: @DiondraWrites