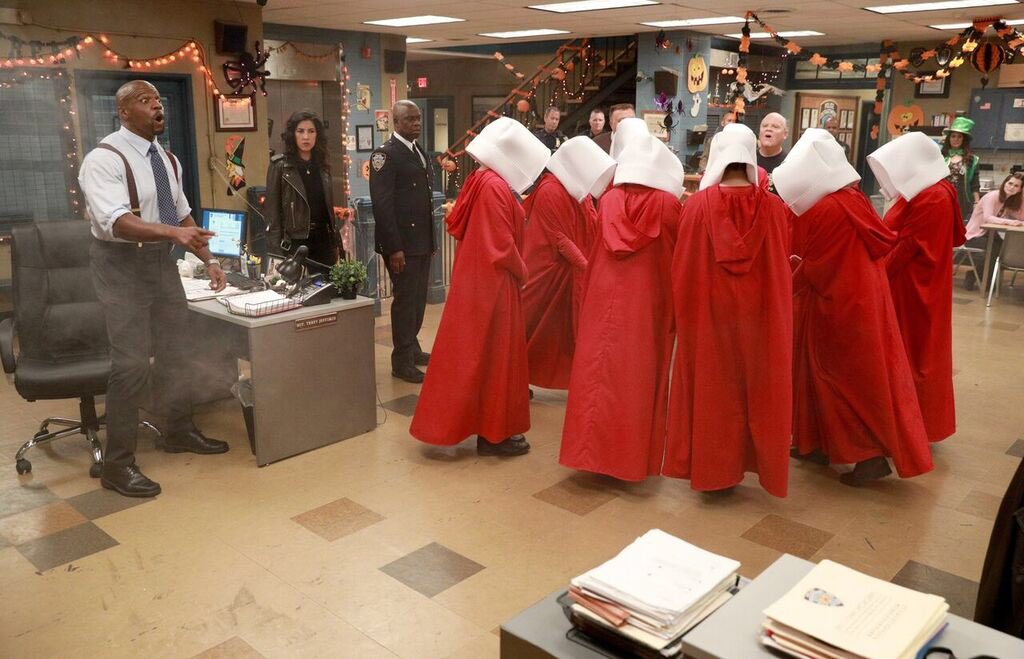 It’s Halloween on Brooklyn Nine-Nine; if you are just watching the show/reading this recap for the first time 1) That’s a strange way to get into a storyline you must be hella confused AND 2) Welcome.

For lovers of the show, we know this means a heist of epic proportions and a winner at the end. Before I recap here’s a list of the last four Halloween Heist winners in case you forgot: Jake, Captain Holt, Amy, and Gina.

Now let’s get into it:

Everyone on the force (except Gina, WHERE IS SHE?) is excited and ready for the upcoming annual Halloween Heist. This year Captain Holt, Amy, and Jake allow everyone to participate in the competition instead of just the previous winners. Just as the competition is ceremonially supposed to start (with the hanging of the winner’s belt from the ceiling), all the lights go out. Everyone freaks out, which is demonstrated by shirts getting ripped open until it is revealed that they have been hacked by Gina in a wolf mask.

She tells them that she has the belt and if they do her chores she will give them a clue to where the cumberbund is. Everyone takes a baby product and gets to work constructing it — or so we think. Jake and Charles meet in a separate office and reveal how they managed to snag the belt. As they are congratulating themselves for a job well done, Charles betrays Jake and handcuffs him to a filing cabinet.

We find out that Charles has teamed up with Terry and Rosa to take Jake Amy and Captain Holt down because they’re always so smug about winning. They take the belt and hide it under something heavy that only Terry can lift, leaving Jake behind.

While being questioned by Scully and Hitchcock Captain Holt is doing some desk peddling that is revealed to be connected to a Rube Goldberg machine that lifts the heavy thing that only Terry (and apparently Captain Holt) can lift enough for Cheddar to snatch the belt from under it. Captain Holt goes outside to retrieve the cummerbund from his dog only to be greeted by a different Corgi.

Jake manages to pay his way out of the handcuffs thanks to fake Boyle (aka Bill) exactly when Boyle comes in to check on him. Jake overpowers Boyle and cuffs him to the file cabinet instead. He then checks the security cameras so he can catch up on what’s going on. Jake realizes that Amy dognapped Cheddar and replaced him, and is hiding the belt in a safe under her desk.

While the Captain is demanding the release of the real Cheddar a swarm of handmaidens (ala The Handmaid’s Tale) begin to circle until Amy yells at them to stop revealing that one of them is Jake. He has stolen the key to Amy’s safe, but when he opens it the safe is empty. Terry put a tracking device on the belt which says the belt is on the move so he and Rosa go to chase after it.

Jake goes into evidence storage where he’s accosted by Amy because they both know the cumberbund hasn’t left the precinct. She finds it in an evidence box. Jake tells her to read the engraving and the next thing you know he’s proposing and I’m crying (love is so beautiful y’all). Amy says yes, because why wouldn’t she, and the squad is celebrating even though technically no one won the heist.

TBH I’m still crying about this episode because the two cutie cops are getting married and I’m so happy. The Halloween episodes of Brooklyn Nine-Nine are something I always look forward to because they embody my favorite thing about the show; sunshine-y happiness and good-natured joy.

The mechanics behind the team trying to retrieve the belt in such an extravagant manner seemed a bit exaggerated and clunky but overall it was a strong episode.

Captain Holt’s interaction with fake Cheddar is the second-best part of the episode, his overall disgust is delightful, and him speaking to Cheddar the way one would with a dog and a person is relatable. Apparently, Chelsea Peretti is still on maternity leave (hence Gina’s absence), but I eagerly await her return.

Shout out to the GUTS reference!