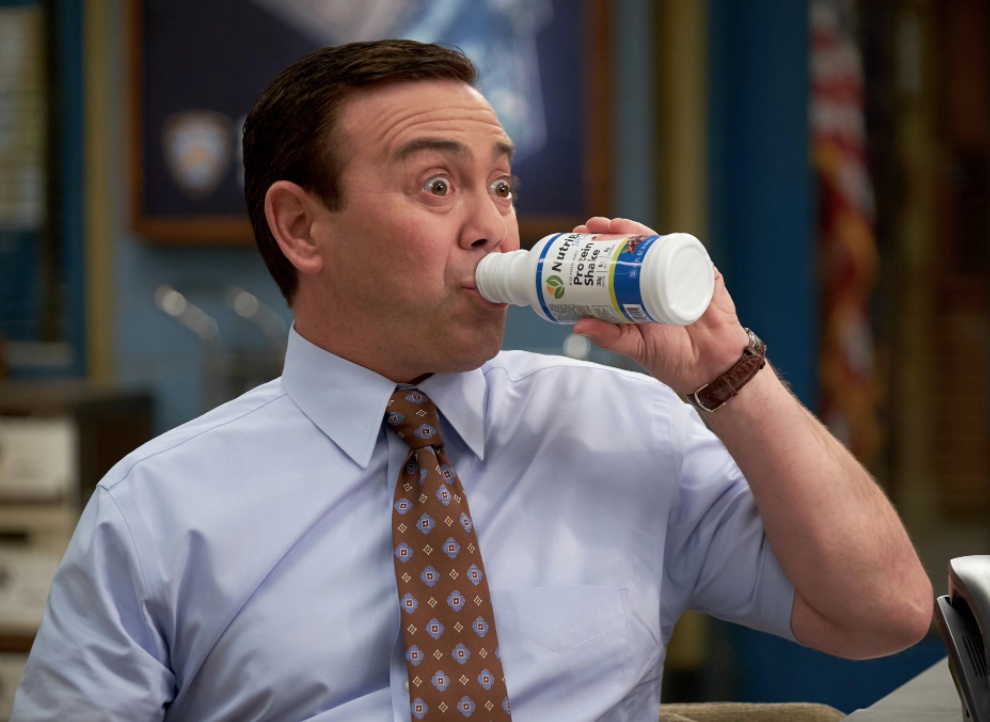 I love a surprise, especially when it’s a full hour of Brooklyn 99. The first episode takes a jab at Sc*entology (I don’t want them coming after me) and Amy’s first day as Sargent.

Charles’ lookalike Bill is back this time with Charles and Jake’s Nutriboom shipments (if you have no idea what I’m talking about feel free to go back and read the Halloween recap). Jake refuses to accept the inevitability of Nutriboom in his life, so he heads down to the main office to demand he is released from his contract, but quickly find out that in addition to being a pyramid scheme, Nutriboom is a cult (these things might be one in the same).

The robot lady named Angela refuses to let Jake free and instead introduces him to one of the enforcing agents. He comes up with a plan to disguise Charles as Bill so they can get to the upper circle and prove that Nutriboom is doing illegal things. They infiltrate a meeting but Charles gets caught because he’s bad at giving creepy neck massages.

They seek out help from actor Jay Chandrasekhar — who’s a spokesperson for Nutriboom. Due to his clout, they figure he would be helpful to get an in with the influential people of the company.  He automatically agrees to help, because Nutriboom kidnapped his dog. While trying to set up for the sting, Jay is kidnapped. Jake and Charles head back to the headquarters to rescue him, but they find him brainwashed.

The real head of Nutriboom (who they both thought was dead) offers Jake back all of his money if he agrees to turn a blind eye, but Jake says no because he has morals (and just got out of jail for being suspected of some shady stuff), which just send Nutriboom after him, and his loved ones.

I Have an Amy

Amy is starting her first day as Sargent and honestly, we’re all so proud! She asks Terry and Captain Holt for advice on how to be an effective leader. Terry gives good general advice (“Just be confident, deliberate and firm”) while Captain Holt puts on the pressure (“The best way to lead is to always obtain all of your goals”).

Amy leads her first briefing and gets flustered by one of her officers, Gary. She completely bombs her briefing by spilling water on the floor and has to find a way to regroup. She goes back upstairs to ask for help about Gary who is getting in the way of her success. The crew deduces that Amy has an Amy (An Amy: An overeager teacher’s pet, who’s hard work tends to annoy other) and gives her ideas on how to deal with Gary. She tries a few, but it doesn’t seem to work and ends up spending a good time running away from him.

That doesn’t work either, so she goes to Captain Holt for assistance and he suggests listening to Gary’s ideas. Captain Holt tells Amy that having an Amy is a blessing because they make you and your work easier and better.

This was a really interesting episode and I hope they continue with the Nutriboom storyline. Having a corporation/cult be the big bad is exciting because there so many directions they can go with the storyline, and taking down entire corporations are risky.

Since Nutriboom is clearly Sc*entology I hope this doesn’t come back to bite Brooklyn 99 in the butt. They (Sc*entology) deserved to be called out though.

I’m really excited about Amy’s journey and growth in her career, she’s worked so hard and deserves. I also LOVE that she has her own… Well her. I think one of the best ways to grow personally is to see yourself in other people; that way you have an outsider/ first-hand view of what it’s like to deal with yourself.

Captain Holt remains the shade king of the 99