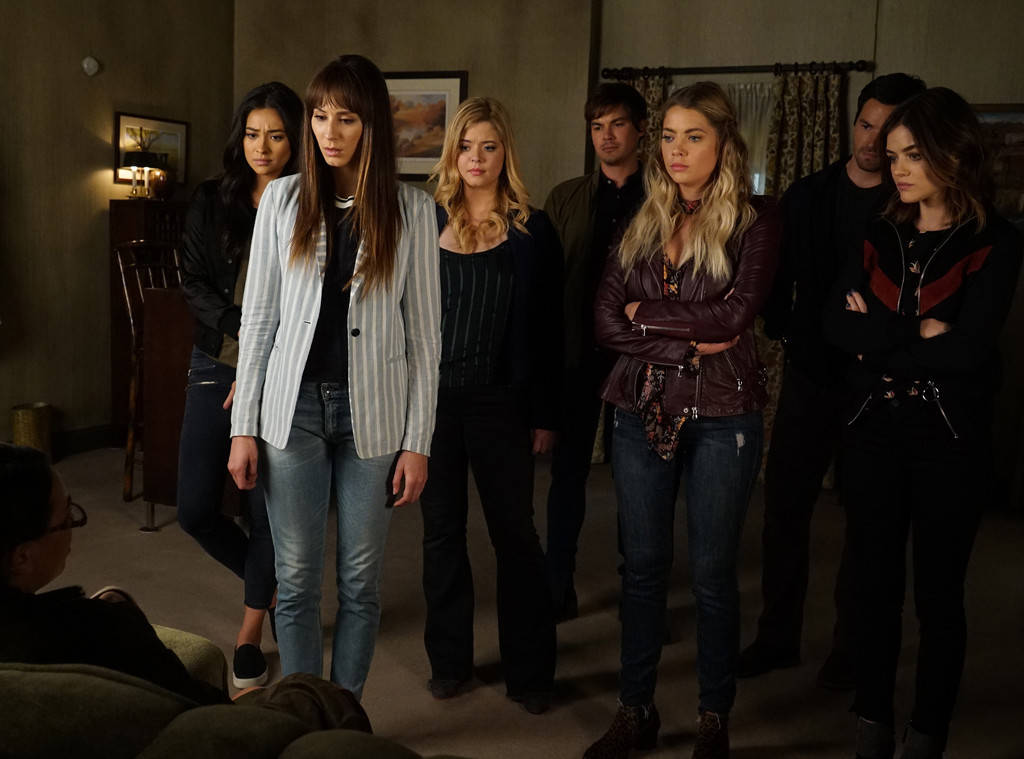 As an avid Pretty Little Liars fan, I’ve learned to forgive the shows many missteps. Its plot holes and inconsistencies are merely a function of the show being well, the show. Still, l thought it might be able to reign itself in for these last few episode, if only so that the last episodes spent with the Liars would be…better. And they aren’t bad, but they’re rushed beyond belief. In part, this is because the show has to wrap up a million and one plot points introduced over the years, and it can’t do all of them justice and also do justice to the characters. The show’s usually had ample time (season after season after season) to make up for this, but once you put a clock on it, you see how it can’t quite balance its priorities.

In the penultimate episode, “Farewell, My Lovely,” PLL finally revisits the moment that kicked off its return to Rosewood: Spencer, Emily, Hanna, and Aria bursting into Alison’s (aka Mrs. Rollins’s) classroom to warn her of an approaching threat. This was always a bit too much, but it served its purpose: piquing our interest in our aged-up Liars. Then it never happened, leaving us to wonder how it fits into the show. Now we have our answer: it doesn’t. It was just a nightmare — and a lazy indicator of the show as a whole. PLL writes itself into corners time and time again, and the leaps it has to take to get out of them aren’t always satisfying.

Like the identity of Charlotte’s killer who is, of course, Mona. I say of course only because it’s the only possibility that would have made sense (saddling anyone else with the murder wrap wouldn’t have been very effective in the final season, would it?), not because I’m a big fan of how it all ended up. There’s still a lingering feeling of “I guess” rather than satisfaction that the clues have been pieced together in part because there wasn’t much of an investigation, just some stumbling onto the truth.

But hey, at least now we know. And we know definitively that Mona isn’t A.D, just slipping a bit after being introduced to the game again. Too much time is spent trying to figure out if Mona’s A.D (this is never not annoying because we already know the answer), and the only highlight is Janel Parrish, who’s always been so, so good at being Mona. She can whipsmart and calculating, twitchy, agitated and so unpredictable as to be frightening, and then return to Loser Mona. It’s safe to say she’s the only supporting character worth missing, and yes that includes all the Liars’s love interests.

Which brings me to Ezra, who looks so stupid this week I can’t understand it. Sure, he’s still feeling guilty about that time he used and exploited Aria and her friends, but he marches around, telling the Liars how awful they are for not being nice to Aria after her betrayal as if they’ve been mean to her for years and not a single night (the timeline on this show is a mess). Yes, Aria’s friends are being totally unfair to her after she allied with their tormentor and splashed their baby nursery with blood and broke up their parents (for real this time). Like, shut up, Ezra. But we’re led to believe Ezra’s totally right because the Liars apologize to Aria, and there’s no point dwelling on anything that’s happened anyway.

Because now we have to go find Dunhill’s body, which A.D stole (again) and deposited at Alison’s Aunt Carol’s house. The obvious next step is to dig it up and make sure it’s there or something, but Aria points out how ridiculous that is. Why do they need to dig it up? If it’s not there what happens? If it is there, they’ll just bury it again? No one knows so they resolve to just leave it alone.

This is the Liars finally growing up and just not playing the game anymore. Of course, this would work better if A.D would also stop playing the game because, in most games, not playing against someone who is determined to play means you’ve pretty much lost. The Liars are reminded of this when Tanner appears to dig up the grave herself.

Some people may be irked by Mary turning out to be a very convenient deus ex machina, saving Spencer and her friends, but I’m not quite bothered by it. We needed Mary to be important in some way, and despite the great material Troian Bellisario had dealing with Spencer’s origins, Mary never felt significant. Spencer’s journey did, but Mary on her own, as her own character? Not so much. “Farewell” doesn’t change that feeling (it only makes it stronger), but Mary confessing to killing Dunhill to save the daughter she’s been forced to love from afar is a neat and tidy conclusion. Knowing how rare those are on this show, I can’t help but like it.