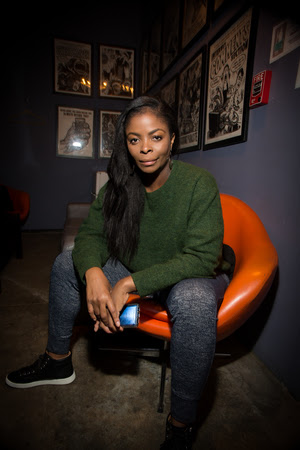 If you haven’t heard of the Janelle James Comedy Festival, let’s share some background on how it got started.

Originally named “The Eugene Mirman Comedy Festival,” Mirman stepped down with the final iteration of his self-titled festival in 2017, when Janelle popped the question “Can I have it?” Fortunately, he did indeed hand the baton to Janelle James who tapped Caroline Creaghead to produce it independently with her. Janelle kept the same zany vibe and raucous laughter while adding her own personal touch at the Inaugural Janelle James Comedy Festival.

Tickets go on sale in October, for irreverently named shows like last year’s “Comedians Who Live Nearby” and “Comedians Who Said ‘Well, Who All Goin Be There?’

Mirman, who made an appearance at the festival last year, said “I am thrilled to be part of the first annual Janelle James Comedy Festival. She’s so funny and it’s a joy to see the joke of a self-titled comedy festival live on and be reborn.”

Janelle James is a Los Angeles based comedian that can be seen on The Comedy Lineup (Netflix), Late Night with Seth Meyers (NBC), and Crashing (HBO).  In what has been an eventful series of events/years, Janelle toured with Chris Rock on his “Total Blackout” tour and Amy Schumer on her “Growing” tour,  before taking over the reins of the Eugene Mirman Comedy Festival (now The Janelle James Comedy Festival) in Brooklyn.

She was included in the Just For Laughs Montreal’s New Faces category for 2016, named one of The 50 Most Funny People in Brooklyn 2016 and has been featured several times for her outstanding performance ability in The New York Times. Janelle’s debut comedy album, Black and Mild was released on September 29th, 2017 on all major streaming networks. Janelle is currently a writer on Black Monday on Showtime.

For more information on the Janelle James Comedy Festival, visit janellejamescomedyfestival.com where lineup and schedule announcements will be posted

You can also catch Janelle James on The Comedy Lineup special on Netflix.