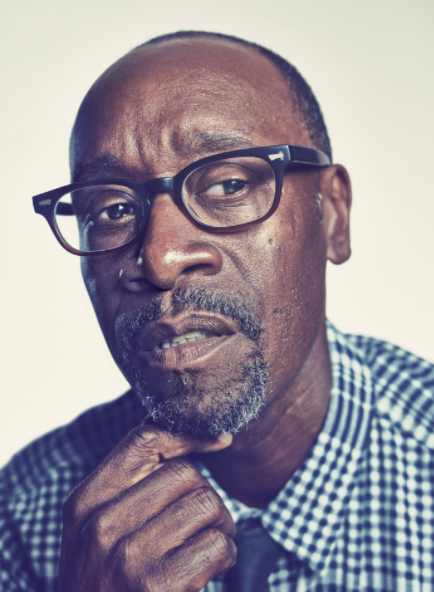 Actor Don Cheadle sits down with several journalists at the Avengers: Infinity War set visit and fills us in on Rhodey’s role in this story.  Rhodey had a bit of a tough break in Civil War, so we’re all curious to see what’s next for War Machine in this new film!

Can you start out by telling us a little bit of what [has happened] from Civil War to this moment?

Don Cheadle: Well clearly there was a pretty significant moment for Rhodey at the end of Civil War. Civil War, where he was accidentally shot out of the air by Vision who is now my mortal enemy. No, I think we worked it out over the break. And now he’s coming back to the Avengers, back to his team a little ambivalent, I think, with a new rig by Tony, which of course he had to put his name on. So Tony, like I do not know who made them. And he’s rejoining the team and reintroduced back here in this storyline.

Do you think his philosophy at all has changed since he was in Civil War and now?

Don Cheadle: I think there are definitely more questions for Rhodey. I think he was always somewhat straddling with having Tony as a friend and trying to support him and do what he needed outside of the lines but still somehow trying to stay within the chain of command and he knows, the military man that he is. I think that’s become more fraught and probably more afraid as the storylines go forward.

How does Tony feel about him now working with this other team?

Don Cheadle: Well I think at the end of the day that division was not something that was really cemented by the characters in the movie, there were outside pressures that created that division and they ultimately want to be back together so I think that Tony, who has yet to make an appearance, so I imagine that he’s understanding of it.

Can we see how Rhodey suit-up again, War Machine style?

Don Cheadle: You might see him suit back up again. That’s gonna be a thing for him to put that suit back on. Last time he was in it, it didn’t go so well.

You talked about, to kind of follow along those lines, how he’s a little bit ambivalent now. Do you think that just getting hurt and obviously also just the way he got hurt and who might have been the cause and all of that, is that something that you feel Rhodey feels?

Don Cheadle: Well I think it’s something that he’s fighting to put behind him. But absolutely, it creeps up. There’s innuendo, there’s shots taken, there’s things said. Don’t want certain people behind me, you know. I want to keep an eye on everyone, want to keep that jewel in front of me, not behind me. Like I said, I think he’s a negotiating this reunion and his rejoining this team.

So what’s War Machine’s reaction to all that, how does he feel about [that] larger than life, all-powerful [Thanos] coming for them?

Don Cheadle: I think as always we’ve seen that Rhodey would prefer to deal with real-world things and that’s kind of what he understands and when we start leaving the planet and talking about things coming from outer space it’s like, I don’t even know, what is that? I know how to fight guys and tanks and weapons and that, that’s something beyond my pay grade. But he’s been thrown into the deep end, they all are in a way in this one, so everybody’s gonna have to figure it out on their feet.

We’ve heard a little bit about the process for this where you don’t necessarily have a script but you’re getting pages, you have an outline. Is there anything coming up that you’re really excited about even if you don’t have the script for it?

Don Cheadle: Well, in the absence of the script I just write my own lines. So I just … I’m in the trailer every day, I’m just pumping it out.

Don Cheadle: Yeah, where is my story credit? I think that’s the real story here. Where is my story credit? No, it’s very interesting on set, obviously when you don’t know the entirety of everything, and things are changing in real-time. It keeps you on your toes, that’s for sure. But it’s ultimately exciting and it’s as fun for us discovering it as it is for the audience. So we’re like oh, we didn’t, we had no idea how that was gonna turn. The story’s really intricate and pretty. It’s very different, I think, from what I’ve seen, what I have read. It has a little bit of a different feel than the last movies had and there’s a little more gravitas and it kind of has to be that way, I don’t think you can keep doing the same kind of thing in this franchise over and over, I think you have to try to bring in some more serious elements and I think Rhodey being injured was a part of it — wait, people can really get hurt? You know things can really go south for these characters.

Don Cheadle: Like I said, I haven’t seen him yet and I’m not sure what it is gonna be. Look, they always have the taking the piss out of each other a little bit and I think their relationship has deepened since the last event, I think Tony feels somewhat responsible and culpable in a way. But again, he’s also had my back.

Can you talk about the practical apparatus that you have? Is this going to be augmented by CG?

Don Cheadle: I’m not sure what the boys and girls are gonna do in visual but it’s pretty good now. It works pretty good, it articulates well, I can run in it, I can jump in it, I can do what I need to do with it. I don’t know how it photographs, I imagine they sweeten everything but I think it’s pretty good.

Don Cheadle: My note for them all was more. Why is he not on this page? I flipped through several pages, I don’t see his name. Let’s work on that, guys. It’s usually what I tell them. Yeah, that’s right.

Ruffalo mentioned that you guys didn’t have a thing going on in the scene but on the set, you came up with this kind of thing when you were coming out, can you talk about that?

Don Cheadle: Oh, that dude. I only know him as the Hulk, he’s very boring as the other guy. He almost blends into the wallpaper. No, Mark and I go way back so we have a lot of fun on set and it’s funny ’cause any little satellite group I think, and it’s probably a little bit of a nightmare for the Russos is always trying to come up with some shtick, some bit, something to do. For me it’s fun and it keeps the frame alive, for them probably they’re like, “Guys, can you just say the lines that we wrote in the script?” But look, whenever you have all of us back together again and we haven’t seen each other for a while, feels like there’s a period kind of giddiness, everyone’s kind of catching up and we’re performing for each other a lot of the times, trying to crack each other up and be there in those kinds of ways for each other so it’s always fun coming back. Yeah, if we’re thinking of the type of guy Ruffalo is, yeah [that’s what] we came up with.