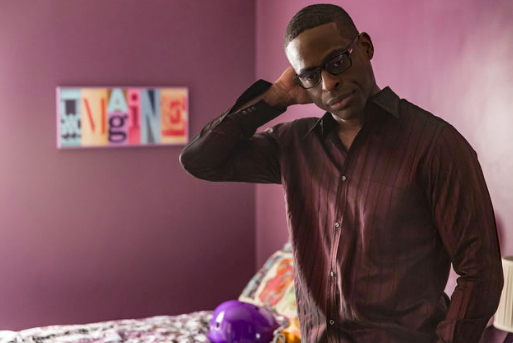 When I saw the first trailer for NBC’s hit family show This is Us, directed by Dan Fogelman, I immediately got vibes that it would be similar to the shows Parenthood and Here and Now.

It was a typical blended family drama that was a bit sappy and melodramatic, but it definitely had something that spoke to me. Plus, I’m just a sucker for that kind of “struggles of the non-traditional family” shows. It’s the kind of show I like to sit on the couch watching with my mom and grandma while we munch on snacks and make comments at the television as if we can talk to the characters.

As I continued watching the show over the years, I made observations about the character Randall (Sterling K. Brown). After he was abandoned as an infant and adopted by a white family to be a sort of replacement baby in “the big three,” there was no surprise that his character would experience some struggles. The way his anxiety has manifested and caused him to react has been very insightful and palpable throughout the seasons. I’ve met people in my personal life who also suffer from recurring night terrors caused by childhood trauma, so when I saw Randall depicting that experience in a relatable way, it felt real. I got shivers seeing him wake up terrified by a nightmare. I kept thinking about how real it felt and how people seldom ever talk about those problems, especially within the Black community.

I liked the analysis and depth that the show took the time to build for Randall. His character is driven by ambition and is highly intelligent, but also anxious and suffering a constant cognitive dissonance regarding his Blackness, selfhood, and overall identity. He struggles to identify with both his adopted and biological father’s life experiences, forgive his adopted mother Rebecca (Mandy Moore) and heal the old wounds still festering from his brother’s bullying.

Ultimately, the show does a great job in setting up the fact that Randall has a lot of baggage that has gone untreated for too long. I even appreciate the show exploring Randall’s resistance to seeking therapy and Beth’s cry for help when telling him he needs therapy to support both him and the family. It is a thoughtful reminder that mental health isn’t just for an individual, but also for their loved ones.

We as people can’t thrive in toxic relationships, and clearly Beth was losing her ability to confide in Randall as he became more unstable over time. It is not a Black man’s job to be the pillar of his household who never needs help. In many ways, Randall confides in Beth for support, and that shouldn’t be viewed as a weakness. Healthy support doesn’t need to be gendered, as it’s something that everyone should strive for.

So, yes, I have been enjoying myself for the most part during this exploration of Randall and Black mental health, particularly among Black men. I believe that representation matters and that it’s a great modeling for a culture shift that needs to happen. Black mental health matters, and it always will.

The bone I have to pick is with where exactly the writers seem to be going with Randall’s character. He’s gone from troubled yet well-intentioned and just trying to keep his family safe, to controlling and manipulative toward Rebecca. I understand, as the show has made it very clear with a ton of recaps and review episodes, that Randall has a lot of residual anger toward his adopted mother. He also has mixed emotions that he can’t seem to classify or understand yet. However, Randall has been going from one extreme to another in an incredibly sporadic way. While mental illness can take on many forms and behaviors, from a narrative perspective, I just don’t know how much further they’re trying to take his character.

What I’m trying to say here is, I think Randall’s character decline has plateaued. We’ve seen him have panic attacks, night terrors, be obsessive and compulsive, exhibit hyper-intelligence, be manipulative and petty — and that’s just in a typical episode, practically every episode. It’s starting to feel like the writers are just going down the list of mental illnesses and checking off boxes for Randall.

It reminds me of the old Degrassi: The Next Generation episodes that would try to cover every high school trope and marginalization. It’d go from the pregnant white teen mother to the Black gay autistic teen real quick, because they had to check off every angle. I’m not gonna sit here and pretend I didn’t binge-watch every episode at the time, but I had to ask myself the same thing about Degrassi that I ask myself about This Is Us. Are they just trying to check off every empty box of the oppression Olympics?

The show seems to be staggering as it tries to press on with new episodes. But it’s becoming a thinktank for recycled ideas and endless recaps of how troubled Randall is and how much he can both hurt and be hurt by others. Each episode has taken on a predictable formula in which: Randall and Kevin (Justin Hartley) bicker and then cool off after a bit; Beth (Susan Kelechi Watson) tells Randall she loves him but he’s going too far; and Randall crying, manipulating, or freaking out about something. Then, someone that he had hurt forgives him and comes to the rescue and then for the next two episodes or so, they do this dance all over again. Also, someone says something mean to poor Miguel (Jon Huertas).

Unfortunately, it happens far too often that a show begins with so much promise and truth then runs out of new ideas and depth. I’m not saying that I’ve lost all hope, but I am getting a little annoyed with the show. I think they should finish the show soon and end it on an arc of Randall’s self-growth. Not in a forced and unrealistic way, but to show that he’s not a static person who is going to stay in the same place the entire show. We get so many scenes reminding us of all of the anger and unresolved trauma that Randall is carrying the weight of, I think it would give the story somewhere to go if he could finally at least begin on the path to healing.

If Black mental health can be addressed, I think it’s just as important to talk about Black radical self-love and recovery. I don’t want Randall to go episode after episode as the angry, controlling Black son. There’s simply too much potential for his character, especially through the William (Ron Cephas Jones) arc of the story, when he really connected with his birth father while coping with some inner demons.

I hope that Randall’s character development can continue to expand the discourse of Black mental health both on screen and beyond without going too far and simply getting lost in the sauce.