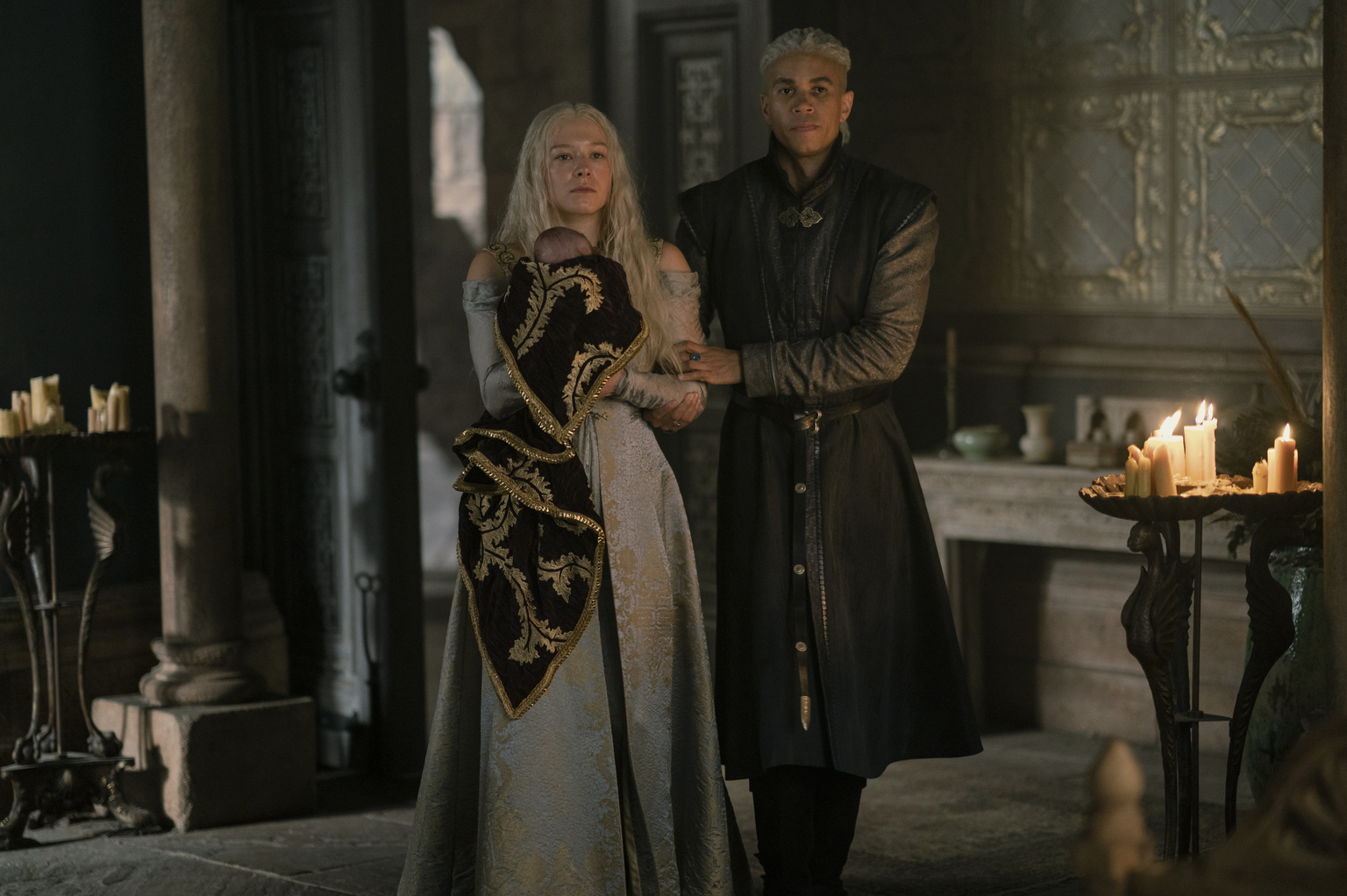 In Episode 6 of House of the Dragon, “The Princess and the Queen,” we hear the sounds of an adult Princess Rhaenyra (Emma D’Arcy) giving birth to her son Joffrey Velaryon. Immediately after the delivery, Queen Alicent Hightower (Olivia Cooke) summons one of the midwives to tell Rhaenyra she would like to see the baby.  This stuns Rhaenyra, as the baby is only a few minutes old.

Proud papa Laenor Velaryon (John Macmillan) is happy to see Rhaenyra has birthed a boy. She tells him Alicent has summoned her, and he’s also stunned at the expediency of this request. As Laenor and Rhaenyra make their way to the Queen’s chambers, Viserys Targaryen (Paddy Considine), who looks half dead by the way, walks over to see his new grandson. We begin to see the first crack of Alicent’s innocent shell when she delivers a biting line towards Laenor, telling him, “Keep trying; soon you may get one that looks like you.” This also implies that perhaps Joffrey isn’t his.

Laenor and Rhaenyra head back to their chambers where we see Ser Harwin Strong (Ryan Corr). He is now Lord Commander of Princess Rhaenyra and asks if he can see baby Joffrey. Harwin takes a liking to the baby, maybe a little too much, which is a bit suspicious.

Next we see Jacaerys Velaryon (Leo Hart), the firstborn son of Laenor and Rhaenyra.  He’s being instructed to help train to tame Vermax. We begin to notice the character of Aegon Targaryen (Ty Tennant) when he fools his younger brother Aeomond Targaryen (Leo Ashton) into thinking he’s being offered a dragon of his own, when instead he’s given a pig to ride on.

Aemond runs to his mother Alicent and tells her how he was teased and given a pig. She assures him that he will have his own dragon one day. Meanwhile, Viserys’ collection of old Valyria has grown significantly and has nearly taken up all of the space in his private chambers. Queen Alicent complains to Viserys about his grandchildren teasing Aemond. Viserys asks if Aegon (their oldest son) is not responsible for the misdeeds as well. Queen Alicent questions the integrity and character of Rhaenyra’s children, implying that they may not be of full Velaryon heritage. While she believes this to be true, Viserys is oblivious to the topic at hand. He also says that toying around with an allegation as such would have dire consequences.

Queen Alicent leaves angry with Ser Criston Cole (Fabien Frankel) at her side.  We see that he is a servant to the queen. She complains about what just transpired between her and Viserys, and Criston insists that the king knows about the illegitimate children. Criston calls Rhaenyra a nasty name, still holding a grudge, and the queen replies that she must believe that honesty and decency will prevail.

Aegon is standing in his window jerking off when his mother Alicent walks in. And she asks, “Who’s idea was it about the pig?” Queen Alicent is upset because of how Aegon is treating Rhaenyra’s children. She believes this may backfire against them if Rhaenyra ever comes to power and Aegon’s succession is threatened. While Aegon is too young and stupid to see it, he doesn’t realize how much of a threat he is as the firstborn heir to the throne.

The following scene is about dragons, y’all. Daemon Targaryen (Matt Smith) is riding Caraxes and an adult Laena Velaryon (Nanna Blondell) is riding Vhagar. The two look as if they are racing and competing against each other. Laena yells, “Dracarys!” and as Vhagar breathes out fire, Daemon and Caraxes fly right through the flames unscorched. This is perhaps normal behavior for husband and wife dragonriders I suppose.

Next up, the family is seated at the table for a feast. The daughters of Laena and Daemon — Baela and Rhaena — are also in attendance. Laena and Daemon are offered a permanent residence in Pentos by Prince Reggio Haratis (Dean Nolan). While Laena declines the offer, Daemon quickly interrupts and says he will entertain the idea. While Laena doesn’t want to be bought by the Pentoshi prince and believes the blood of old Valryia is much stronger, Daemon’s arrogance takes over. The pregnant Laena wants her baby to be born in Driftmark, according her their birthright. She says, “I want to die a dragonrider’s death, not that of a fat country lord.”

Meanwhile Ser Criston Cole is instructing the young Targaryen boys how to swordfight. Ser Harwin Strong gives him some advice on his methods. At this point Cole knows that Ser Harwin is the father of Jacaerys (not Laenor). He aggressively grabs Jacaerys and pits him against Aegon, who is older and much bigger, which Harwin knows is not a fair fight. Ser Criston Cole further taunts Harwin by saying his interest in Jacaerys is rather odd and that most people in his position would only be that devoted if they were like a “son” to him.  This infuriates Ser Harwin and he attacks Criston.

Lord Lyonel Strong (Gavin Spokes) has an argument with his son Harwin about the rumors being spread about his treacherous ways with the princess.  Meanwhile, Rhaenyra overhears this conversation between the two.

A distressed Rhaenyra candidly speaks with Laenor (who is completely unaware of what is going on) about the rumors floating around about their illegitimate children. The princess is angry that Laenor wishes to sail off into the narrow sea rather than focus on family matters. And while Rhaenyra condoned and agreed to their open marriage, she expects Laenor to be at her side when she needs him the most. Rhaenyra then pulls rank and says, “As princess and heir to the throne, I command you to stay at my side.”

In a candid discussion with Laena and Rhaena, Rhaena confesses that her father Daemon never speaks to her. She’s also concerned if she has to stay in Pentos because she’s the only one in her family without a dragon. Laena assures Rhaena that Daemon is doing his best. Laena later tells Daemon how she misses her brother Laenor and asks if he longs for home.

During the Small Council meeting, Lyonel Strong notices the tension between Rhaenyra and Alicent is so thick you can cut it with a knife. Rhaenyra tries to get in Alicent’s good graces by proposing that her eldest son marries Alicent’s daughter Helena so they can rule together. She offers the eggs of Syrax to Aemon as a symbol of goodwill. Alicent interrupts Rhaenyra to show her lactating through her gown. Rhaenyra is embarrassed, and the meeting ends.

Lyonel tries to resign from the king’s service due to the looming allegations about his son. The king refuses to accept it. So Lyonel proposes to have his son moved back to Harrenhal instead, and the king agrees.

Larys Strong (Matthew Needham) has dinner with Alicent. The two discuss what just transpired between Lyonel and the king, and the discussion of his brother Harwin. Larys insists Viserys is willfully ignorant to what’s happening.

Meanwhile, Laena is giving birth, and much like Queen Aemma, her birth has been breach, which tragically will result in her death if they cut the baby out. Knowing this fact, Laena goes out to see her dragon and Vhagar and yells “Dracarys.” She burns to death in the flames.

Ser Harwin bids goodbye to the princess and her children and heads out to Harrenhal. In the middle of the night in Harrenhal castle, Lyonel Strong wakes up to smoke and the cries of his son Harwin in the next room. The room is engulfed in flames, and he burns to death.

The final scene ends with Larys sneakily confessing to Alicent about the cursed walls of Harrenhal and that they pass judgment on anyone who crosses through its corridors. He then tells Alicent, “You will repay me when the time is right.”

The Dance of the Dragons have begun!