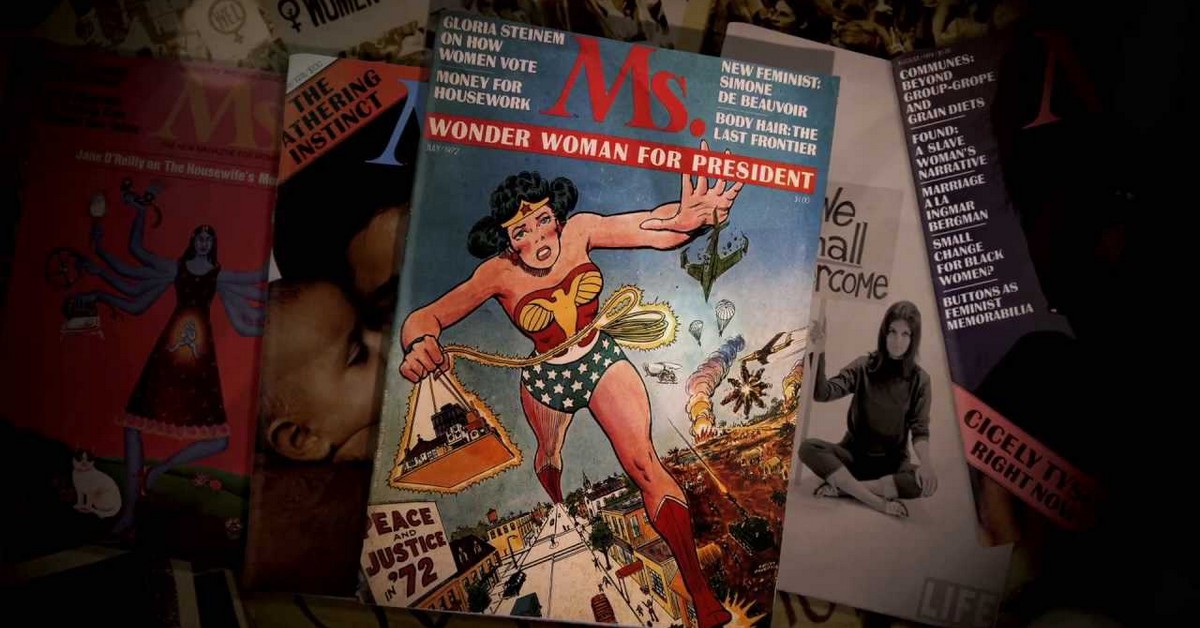 Wonder Woman and her image have been the topic of many feminist debates ever since the heroine first debuted in DC Comics Universe. She was created by American psychologist/writer William Moulton Marston — whose pen name was Charles Moulton — as the antithesis of the flaxen-haired and barrel-chested masculinity that was prevalent in the comics of the WWII era, and many of the initial stories had her battling Axis forces and other supervillains.

In fact, those beginning stories often depicted Wonder Woman, who was modeled after Marston’s wife Elizabeth and their life partner Olivia Byrne, freeing herself from various restraints and overcoming dangerous situations. This countered the whole “damsel in distress” trope all too common in the comics of 1940s (and arguably still the case to this day). But none did more for the iconic heroine than Gloria Steinem, a known essayist, civil rights activist, and feminist icon, with a movie of her own.

Wonder Woman, a character that appeared in the early 1940s, had a different origin story compared to the one known and accepted in today’s DC canon. She was originally sculpted from clay by her mother, Queen Hippolyta, and was given life as an Amazon, along with superhuman abilities that were gifted to her by the Olympians. The character has changed a lot since then, especially in regard to her origin story, which now states that she’s a daughter of Zeus.

However, many still regard the original WWII-era Wonder Woman to be a representation of the feminist philosophy of its creator. Unfortunately, after Marston died in 1947, the writers who came after him greatly reduced Wonder Woman’s feminist ethos by having her relinquish her powers within the narrative so that she might stay with her love interest, Steve Trevor.

With her superhuman powers gone, Wonder Woman assumed the identity of Diana Prince and fought crime using her martial arts and weapons skills alone. In other words, the writers downplayed Wonder Woman from an all-powerful feminist icon to a female derivative of James Bond for an entire arc.

Gloria Steinem, the legendary feminist and co-founder of Ms. magazine, was a huge fan of DC Comics, but she was very disappointed with how the company and its writers changed Wonder Woman for the worse by reducing her to a boyfriend-obsessed James Bond knockoff. She lobbied DC Comics, both publicly and privately, to have the character restored to her former glory.

One of her methods was to put Wonder Woman on the first issue of Ms. magazine — America’s first national feminist magazine. In fact, it was the Ms. cover that cemented Wonder Woman’s place as a feminist icon. Before the first issue was published, Steinem was in talks with Patricia Carbine of McCall’s women’s magazine (which ran from 1873 to 2002) about starting a publication that would address issues contemporary women cared about. However, the two couldn’t agree on the idea.

Steinem wanted the magazine to resemble one of the more radical, smaller publications of the time, while Carbine insisted that, if the venture was going to be successful, it had to resemble contemporary women’s magazines, like Better Homes and Gardens or Family Circle. The volunteer staff at Ms. ran with Steinem and printed a preview issue, which sold out in eight days — prompting Carbine to resign from McCall’s and get on board with Steinem. She also tasked the staff with coming up with a first cover that would separate it from the other women’s magazines on the newsstands.

The team decided they didn’t want an individual woman on the cover because it could put too much pressure on an individual woman to represent the entire feminist movement. But the WWII-era Wonder Woman fit the bill wonderfully. The idea for the image struck when one of the co-founders of Ms. (Joanne Edger) saw an illustration of Wonder Woman done by Murphy Anderson (an actual DC Comics artist) for a story Ms. was writing about the heroine.

And it was a perfect match — 1972 was an election year in which Shirley Chisholm, the first African-American woman elected to Congress, ran for the Democratic Party’s nomination. The US was still locked in a publicly-unpopular war in Vietnam, so the image of Wonder Woman, as a peace- and justice-seeking heroine, felt appropriate to represent contemporary progressive values held at Ms.

The magazine now had its cover but not a cover story, which at first was up to Gloria Steinem to write. She didn’t end up writing the Wonder Woman story for Ms. due to a conflicting work schedule, the direct hand she played in so passionately reinstating Wonder Woman to her former glory that she was dubbed “the woman who saved Wonder Woman.” She is largely credited today for the heroine’s modern-day incarnation.

Both Gloria Steinem and the Ms. staff lobbied DC Comics publicly by putting Wonder Woman on the front of Ms. magazine and reprinting some of her stories from the Golden Age of Comic Books so that the girls and women could see what the contemporary incarnation lacked.

Having Warner Communications, who also owned DC Comics, as a major investor in Ms. allowed Steinem and Edgar to privately lobby Dick Giordano, a man responsible for an entire DC Comics superhero roster, to stop making Wonder Woman a powerless 1950s spy woman. Steinem was so tenacious that, one day, she received a call from Giordano himself, stating the following:

“Okay, she’s got her magic lasso back to make people tell the truth, she’s got her bracelets back to repel bullets, she’s got Paradise Island back as her origin story — and a Black Amazon sister named Nubia. Now will you leave me alone?” (Dick Giordano to Gloria Steinem).

Wonder Women’s powers and traditional costume were restored in Wonder Woman #204, which was published as a January-February issue in 1973.

Thanks to Gloria Steinem, the Wonder Woman we know today symbolizes the values of women’s culture, like strength and self-reliance, sisterhood and mutual support among women, and peacefulness and respect for human life. She’s a beacon of hope and inspiration for both women and men and a symbol of truth, justice, and equality to people everywhere.