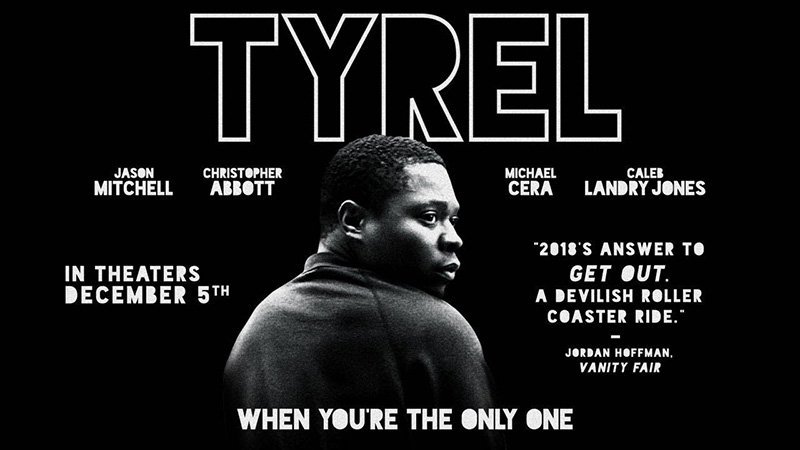 Being the lone Black face in the room is nothing new to a lot of us, especially the nerds in the group. Many of us were stuck in gifted programs or prep schools where Black faces were sparse, and we all felt like unwilling ambassadors of Blackness. These situations were never easy to enter into, but that was something our white friends never did know or understand. Sebastian Silva’s film Tyrel translates this experience into one that our white friends can understand. Don’t be surprised if you get a few long overdue apologies after they watch the film.

The Black Face in  the Crowd

Tyrel stars Jason Mitchell as Tyler, a Black man who accompanies his buddies, Johnny (Christopher Abbott) on a weekend-long birthday party for another one of Johnny’s friends, Pete (Caleb Landry Jones). They are staying at a home owned by another of Johnny’s friends, Nico (Nicholas Arze). The house is in the middle of the woods, in the Catskill Mountains, secluded with no cell service. Tyler is soon trapped in a house full of white dudes who are full of energy and ready for nonsense in celebration of Pete’s birthday. 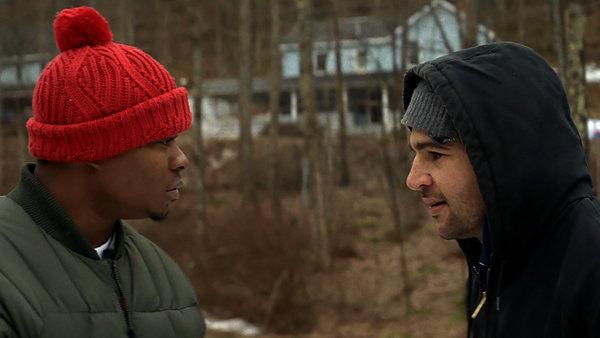 The name of the movie is actually the first microaggression Tyler experiences over the weekend. One of Johnny’s friends calls him Tyrel, and Tyler has to correct him. Innocent enough, right? As that first day grows on, the microaggressions turn into some very uncomfortable racism that is too blatant to miss, yet still something that the white guys in the room call, “just a game.” The drinking and shenanigans get weird and Tyler checks out. His turning early for bed, however, is used to paint a picture of a reluctant participant, from the friends’ perspectives. We know though, that Tyler was just trying to protect himself from their privileged games, which often turn against us sooner or later. (Those of you who went to predominantly white schools know what I mean.)

Things do not improve. In fact, the trip worsens as another friend Reuben, played by Michael Cera, arrives with a machete and a pinata made to look like Donald Trump. He and Tyler hit it off, but the party gets even wilder. Two more friends show up, packing the house and sending the crazy level out of control. At one point, Reuben is talking about getting the gas and setting someone (Pete?) on fire. There is way too much alcohol and weed, too. Some fighting happens, and Nico’s house is soon trashed. The whole time, there is this racial undercurrent that makes the audience feel like Tyler may not survive the night.

This is Black Horror

In this way, Tyrel goes from drama/comedy to a heavily nuanced Black horror. It plays on some of the things our parents and grandparents told us before we went out with our white friends. About how crazy they can get and how the Black one is always the one who catches the worst of it when trouble comes down. Tyler’s friends are literally playing with fire at one point. It’s a setup for disaster. I keep thinking that Tyler is going to die at any moment. (I truly can’t count how many times I spoke out loud, “They are going to kill you Tyler. Get out of there!”)

The film is Black horror, and I am not alone in this assessment. A handful of critics have compared it to Get Out, the 2017 genre-breaking hit that drew a curtain back on Black horror and the white progressive. Although Tyrel is not classified as horror and isn’t gory or as sinister as Get Out, the film does give off that same unease and feeling of doom as the Black guy tries to survive a night of white nonsense.

The more nuanced parts are what make the film more relatable for Black viewers and believable for everyone else. In one scene, Tyler breaks away from the group to get to bed early. He brushes his hair, pulls out and applies the hair grease, and then tops it off with a wrap that will ensure well-conditioned waves in the morning. However, Tyler stops and sits. We can hear the wild party going in the other room. So, does Tyler. He decides at the last minute to omit the wrap and go right to bed. This small gesture that shows just how Blackness is compromised to mitigate the awkwardness that would come from white people seeing something unfamiliar. It’s tiring to explain our culture at every turn, to have one more reason to feel othered, to be separated from the crowd. At that point, Tyler didn’t need that one more thing. He had enough reasons to feel like he was not safe in this space.

The audience will spend much of the latter part of the film wondering when Tyler is going to die, and that is the beauty of Tyrel. By telling the story in the first person, from Tyler’s point of view and with the camera angles that stay tight on the experiences as Tyler would see them, Silva invites the audience into the Black man’s perspective. Non-black viewers will feel the intimacy and may be shocked to find out just how scary it is to be the Black guy in a house full of high-energy white guys. That fear of people, even if they are “allies,” or “woke” is important. It will start conversations on safety, comfort, and just how much of a friend they’ve been to that Black friend.

Those small tweaks to make the script “more Black” along with the camera techniques used to make the story more intimate and uniquely Tyler’s POV are what make Tyrel a film that everyone must see. Try it. Take a mixed group of Black and non-Black friends for a movie night, then discuss. Or, if you are “the Black friend,” make this a film date for you and the rest of your group. The film was written to not only continue the conversation that has been overtaking the country in the last few years, it steers the discourse into a direction that is most productive for mixed-race friend groups. Audiences will thoroughly enjoy Mitchell as well in a role that shows a bit more of his range than we’ve seen so far. Tyrel is a film that people will be discussing for quite some time.

Tyrel is in theaters now.

The Cast of ‘Life & Beth’ on Growing up and Moving Forward