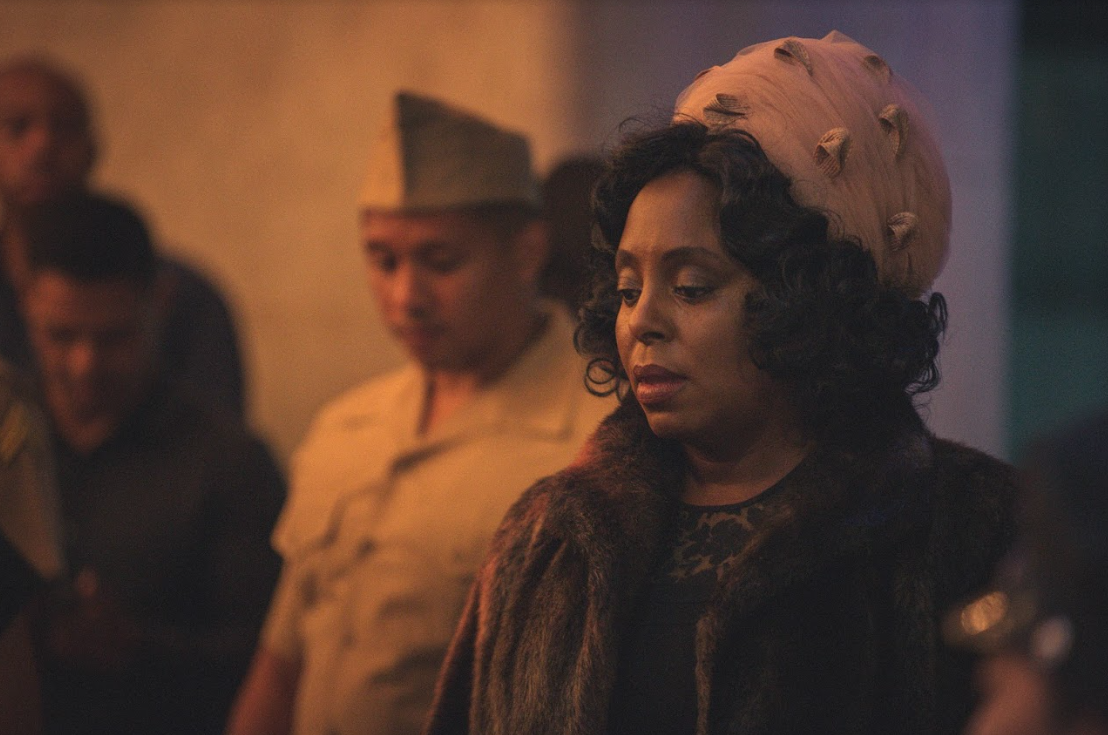 There aren’t many vocalists whose voices embody a movement; their deeply rich tone can uplift and inspire. Mahalia Jackson had that effect on those who heard her sing. Now, Ericka Nicole Malone Entertainment is giving us the opportunity to learn more about her in Remember Me: The Mahalia Jackson Story. Written and executive produced by Ericka Nicole Malone and directed by Denise Dowe, the film takes “a poignant look into the life and rise” of an iconic gospel singer.

Grammy Award winner Ledisi stars as Mahalia Jackson. She is accompanied by Columbus Short, Janet Hubert, Wendy Raquel Robinson, Vanessa A. Williams, Keith David, Corbin Bleu, and Keith Robinson. This ensemble cast pieces together Jackson’s early childhood trauma with her devout belief that her gift was God’s and God’s alone. The film chronicles how through many adversities, Jackson never gave in to the pressures of a husband or a manager to sing any other music besides gospel.

BGN had a telephone conversation with Ledisi about playing Mahalia Jackson, the parallels between herself and the gospel singer, and whether she’d like to do more acting.

How did you get the role of Mahalia Jackson? What interested you in portraying her?

I was actually on set at Pose working in New York. I got an email asking me if I would read for this part of Mahalia from Erica Malone. I sent it to management and wasn’t really interested because I had already played Mahalia in Selma. Doing a feature … I wasn’t really sure.

My management convinced me to just go ahead and audition at least. When I did, they really wanted me for the part. I got an email from the casting director and Erica, then I was on the phone with Denise Dallas, a wonderful actress who’s now directing; I didn’t know she was connected to the film.

Talking to them reassured me that I should try. I was very nervous. On the second day, I didn’t know if I could do it because it was overwhelming, but I had a wonderful experience. I’m glad I did it. It worked out, but I didn’t look for this part. It found me.

Besides music, are there any parallels between the two of you that drew you in?

When I did Selma, I studied a lot about Mahalia, even just to sing that little part I sang. With this, I dove in deeper. It started with the music, but you have to understand the reason why she’s singing and her anointing.

It was really studying more of the Bible and particular songs and what she wanted people to be ignited from. Her purpose was to ignite, uplift, and spread the word of the gospel of the Lord. So all of that mattered. I couldn’t ignore that part. That part meant more than anything, and then when you look at her life, she never let anything get in the way of that.

It wasn’t just the words and not performing here or performing there. She had a purpose. Understanding her purpose helped me get into the part. It also taught me that’s why I do what I do. What’s my purpose? It’s always to leave a legacy that’s rich, but for her, it was to tell people about God and remind them you can win and persevere with knowing Jesus.

Was there anything that you learned about Mahalia during developing this role that surprised you or gave you a new understanding of who she was?

She was a strong businesswoman. In that era, she was about her business. She knew when she was being cheated, and she would say it. She was not hiding. She was very vocal about everything. She was a superstar.

She was huge in her presence, not just globally but also as a human. That’s why she could stand next to Martin, give advice, and be a sister-brother relationship in that whole movement. She was the great Mahalia Jackson, so that’s her power. She knew her power, and I love that part. I did understand it fully, then I got it. I love that a woman who wrote this, Erica Malone, and a woman director were very clear about making sure that other women saw this woman in that way. We didn’t focus just on her relationships. We focused on her business etiquette as well. It took women to make sure that was seen. I love that.

What was the most challenging part of filming this movie?

Filming during COVID and it turning from a short to a feature. All of that was challenging because it started one way and ended up being bigger. The forces against it were bigger, but it prevailed. We still finished our work, but it was a lot. It was a lot going on. I’m very proud of the cast and crew and Erica for believing in it in a bigger way.

You mentioned you weren’t sure about playing Mahalia. After completing your first feature, are you interested in doing more acting?

Remember Me: The Mahalia Jackson Story premiered Tuesday, April 19, 2022, at the 30th Annual Pan African Film & Arts Festival in Los Angeles, California. Tickets for the festival viewing are available here and make sure you keep your ear to the ground to find out when this film will come to a screen near you.