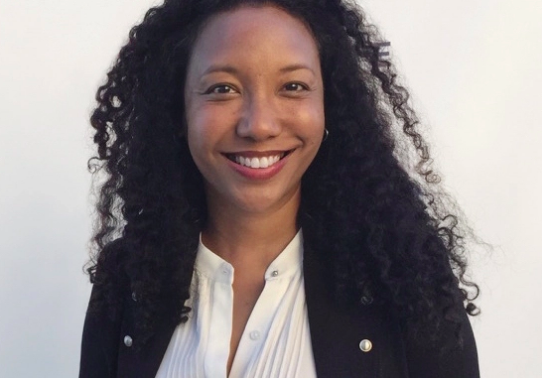 It’s a new half-hour program that centers the Latinx experience in East LA, the vibrancy, the drama, the gentrification — warts and all. Macer, who previously ran Season 2 of Queen Sugar, brings unique sensibilities as a biracial, first-generation Angeleño to a predominantly Latinx writers room. We sat down to discuss her hopes for the show during a break from filming in Boyle Heights on the iconic Cesar Chavez Avenue.

It’s the protest episode during a food tour through the neighborhood. It’s penultimate, so we’re excited about it. It’s climactic in the sense that the protest and food tour embodies gentrification in a cinematic way, one that shows viewers how it’s an issue a lot of people are grappling with.

Your writers room is diverse. How does that influence the flavor of the show?

I think it helps. Alessia Costantini, who’s Italian-American, is just an excellent writer. She’s hilarious. Emelia Silvano, who’s Latinx, is very funny. Arielle Diaz is also coming off comedy. Linda [Chávez], to me, is more a drama writer. Marvin [Lemus] is more a comedy writer, which is why they make the perfect team. I mostly came up on dramas like Queen Sugar and Nashville, so I bring a dramatic perspective. The episodes that I wrote lean towards drama.

Outside voices help make sure that it’s not too inside baseball. Even on Queen Sugar, we had writers who were not African-American. You want diversity, but also you want to make sure you’re true to the characters in this community, so our room is predominantly Latin. It was mainly myself and Alessia who weren’t Latinx. It’s important to honor that voice, but also understand there are first-generation, second-generation voices that understand. They get what it’s like to grow up in a home where people are speaking a different language. They’re living the immigrant experience and fighting for the American dream.

What’s your take on gentrification?

It’s a tricky issue because people don’t understand that when change happens in a neighborhood, so many people are affected in an adverse way. It raises rents and contributes to displacement and homelessness. We’re seeing the homeless population grow here [in East LA] because people are pushed out of affordable housing that’s torn down to create condos or high rises. Folks sell their home but don’t get a return that enables them to buy another one in the same neighborhood, and they’re displaced and pushed out. People aren’t talking about the horror stories, like the 100-year-old woman in Ladera Heights. After living at her place for over thirty years, she was evicted.

The challenge is also that culture starts to get diluted and lost. We’ve seen it happen in Inglewood on the other side of town. We see it happen here. But then there are Latinx people who are moving into the community. They’re opening businesses, but because they’re not from here they’re going getting a little pushback. So it’s a tricky issue, and you have to be very sensitive to community needs.

How did you come onto this project?

I was coming off Queen Sugar, doing my development, but also taking meetings for other shows. My agent at the time, Howie Tanenbaum, sent me the web series first episode, and I loved it. I watched it over and over again. Then I asked for all the episodes, watched them, and loved them.

I told my husband, “I don’t know if I can go and meet on this because I’m not Latinx.” He said, “You love it. You’ve been watching it over and over again, so you should probably take the meeting.” I met with the creators and producers at Macro studios, and we hit it off. As a second-generation Korean-American, I understand the struggle and the burden of the experience. I talked about that, as well as the gentrification my mom’s experiencing on the border of Koreatown and Hancock Park. It’s a real and present issue for my family.

Given your insight as an outsider, are you also trying to appeal to a broader audience?

First and foremost, we’re a show about a family holding on to their business against the backdrop of a changing city. Many people can identify with that, whether you live in Downtown or the Arts District, Little Tokyo, Koreatown, or North Hollywood. I always want to create characters that people can relate to, that are real, authentic, that speak to the same issues that other people are dealing with. Like, chasing your dreams when you don’t necessarily come from the right family or a family of means. How do you do that? We see that reflected in Erik, who’s stuck. We understand that in Chris, who’s chasing a dream. If we’re true to the character and their emotional arc, then it’s going to land with people.