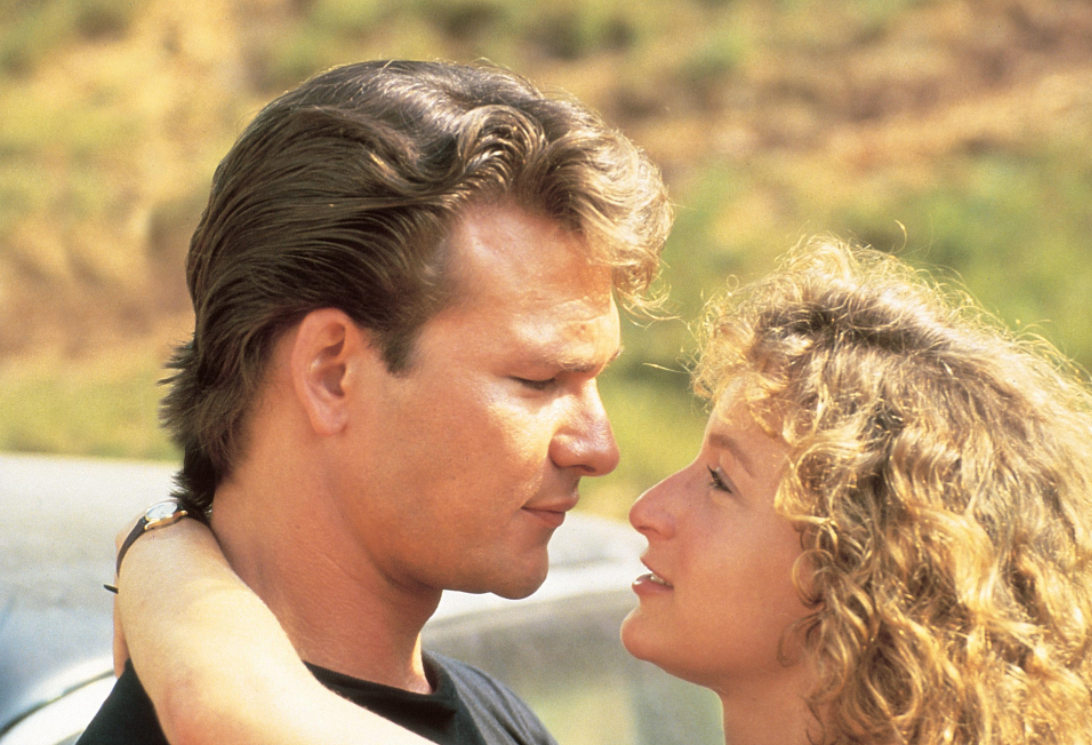 It’s the summer of 1963, during her seasonal job at Kellerman’s resort as a dance instructor when Penny Johnson (Cynthia Rhodes) finds out she’s pregnant with her boyfriend Robbie Gould’s (Max Kantor) baby. Robbie dumps Penny the moment after he finds out she’s knocked up. He quickly moves his opportunistic sights to a new hotel guest Lisa Houseman (Jane Brucker). Lisa is the materialistic older daughter of a wealthy VIP guest Dr. Jake Houseman (Jerry Orbach).

Dr. Houseman’s idealistic younger daughter, Baby (Jennifer Grey), is instantly infatuated with Penny’s charisma, stupendous dancing skills, and Penny’s gorgeous dance partner Johnny Castle (Patrick Swayze). When Baby finds out Penny is in trouble, she inserts herself into the situation to try and help organize an illicit abortion. This also means learning how to dance from scratch so she can cover for Penny during the only appointment available. Dirty Dancing is as classic a romance drama as they come. Its sweeping dance numbers and iconic musical montages make it easy to forget that illegal abortion is at the core of this love story.

While Dirty Dancing is technically a period piece, the film includes several modern-day songs from 1987. That ended up situating the hybrid storytelling firmly in the 80s, even though it’s technically taking place in the early 60s. This makes Dirty Dancing a fascinating vehicle to explore a pre-Roe v. Wade world while being released in a solidly post-Roe America. It is newly relevant in 2022 on its 35th anniversary as America is confronted with a potential future that no longer includes the right to choose a pregnancy to term.

As a character, Baby Houseman embodies so much of the socially conscious and activist spirit that would shape the later 60s and 70s, particularly the civil rights and the anti-war movements. But she’s still green around the ears thanks to her overwhelming economic and racial privilege, so her encounters with working-class Penny are telling on so many levels.

After Penny shares how she was kicked out of the house at 16 and she became a dancer out of economic necessity, oblivious to Penny’s obvious pain and stress at that moment Baby replies, “I envy you.” This demonstrates she’s not really been listening and romanticizes Penny’s bohemian past. In fact, watching Dirty Dancing while centering on Penny’s experiences, the film becomes an entirely new entity. Yes, Penny is beyond beautiful with a perfect body. However, her face is stretched tight with anger and fear. The occasional sadness breaks through when she allows herself to feel the full breadth of Robbie’s betrayal. She deals with the shame of having to now deal with an unwanted pregnancy with only the help of her best friend Johnny.

Baby’s naivete is highlighted with gold and glitter when she finds out her family’s waiter Robbie is the father and tells Penny how he’d surely help her at least with the money if she just asked. “He knows,” Penny says, the phrase landing like a slap distilling the resignation and disappointment shaping her current predicament in those two words. It’s this harsh wake-up call that prompts Baby to borrow $250 from her father, and then to sub in for Penny when she finds out the only available appointment is during one of Penny’s and Johnny’s shows. Without Penny’s abortion, there is no Dirty Dancing; it’s the sole motivation that allows Baby and Johnny’s romance to bloom.

When Baby and Johnny return from their most successful gig at The Sheldrake they find Penny near death after the butcher of a doctor “who had a dirty knife and a table.” Billy (Neal Jones) tells them that he could hear Penny screaming, but the door was locked, and he couldn’t get inside. This implies that the abortion might not have even been consensual at that point. The man did it anyway, took the money, and ran. Dirty Dancing is fiction, but Penny’s abortion is very real for so many women without means. That includes the men like that doctor who take advantage of their vulnerable — and taboo — status for a few bucks.

This leads us to Robbie — “Some people count and some don’t” — Gould. Robbie might be going to Yale, but he’s just a step up the hierarchy than Penny as resort help. Yet he still positions himself as better than her, to discard her when she’s inconvenient. Penny needlessly explains to Baby, “I just want you to know that I don’t sleep around, whatever Robbie might have told you. And I thought that he loved me. I thought it was something special.” An added heartbreak to an already horrible situation, throwing sexual manipulation into the human pile of shit that is social climbing Robbie.

It’s been 35 years, and there continues to be an entire pipeline of self-entitled men like Robbie and the doctor who prey on women and get away with it. How else could there currently be two alleged sexual offenders on the same Supreme Court poised to strip women’s and reproductive rights in general? At least Robbie gets something of a comeuppance when Dr. Houseman finally discovers he’s the one who got Penny pregnant and abandoned her. Robbie’s only real consequence is losing his huge end-of-summer tip. Better than nothing happening to him, right?

Johnny Castle might be featured as the romantic hero of Dirty Dancing. But Baby’s father Dr. Houseman is the actual hero of the story, and his behavior is something in the movie that remains ahead of its time. When Dr. Houseman finds out Penny needs help, he simply helps her. He passes no judgment on her at all. He even gives the impression that he might have done the procedure himself if he’d known she needed it. The people he’s angry at are Johnny, who he initially believed was responsible for getting Penny pregnant, as well as his daughter for lying and not trusting him.

When he forbids Baby from seeing any of them, it’s not because of the unwanted pregnancy or abortion, it’s because he felt Johnny shirked his responsibility and Baby enabled him. Dr. Houseman’s characterization is truly one of the most advanced portrayals of a medical professional in the 1963 context of a lack of reproductive rights for women.

As Dirty Dancing has aged, the love story aspect actually becomes less and less interesting and what comes to the surface is how honest this movie is in its representation of abortion, as well as the resulting fact that people will always need access to them.

It’s whether or not the procedure will be done by a butcher with a dirty knife or safely by a caring medical professional. These recent developments in the US aim to send us all back to the shadow side of Dirty Dancing: an America where a pregnant person doesn’t have the right to choose what grows inside them and might risk their life for basic health care.

In the 35 years since Dirty Dancing stole our hearts, there have been hundreds of other great love stories. But there categorically haven’t been many out and proud anthems to reproductive justice and reproductive rights wrapped in those stories as seamlessly and fundamentally as it is in Dirty Dancing. As the battle for Roe v. Wade continues, let’s remember that the actual heroes of this story are Penny and Dr. Houseman, who continue to teach us that women — and anyone who can get pregnant — have the right to choose when or if that happens, and quality health care should always be available to support those choices.