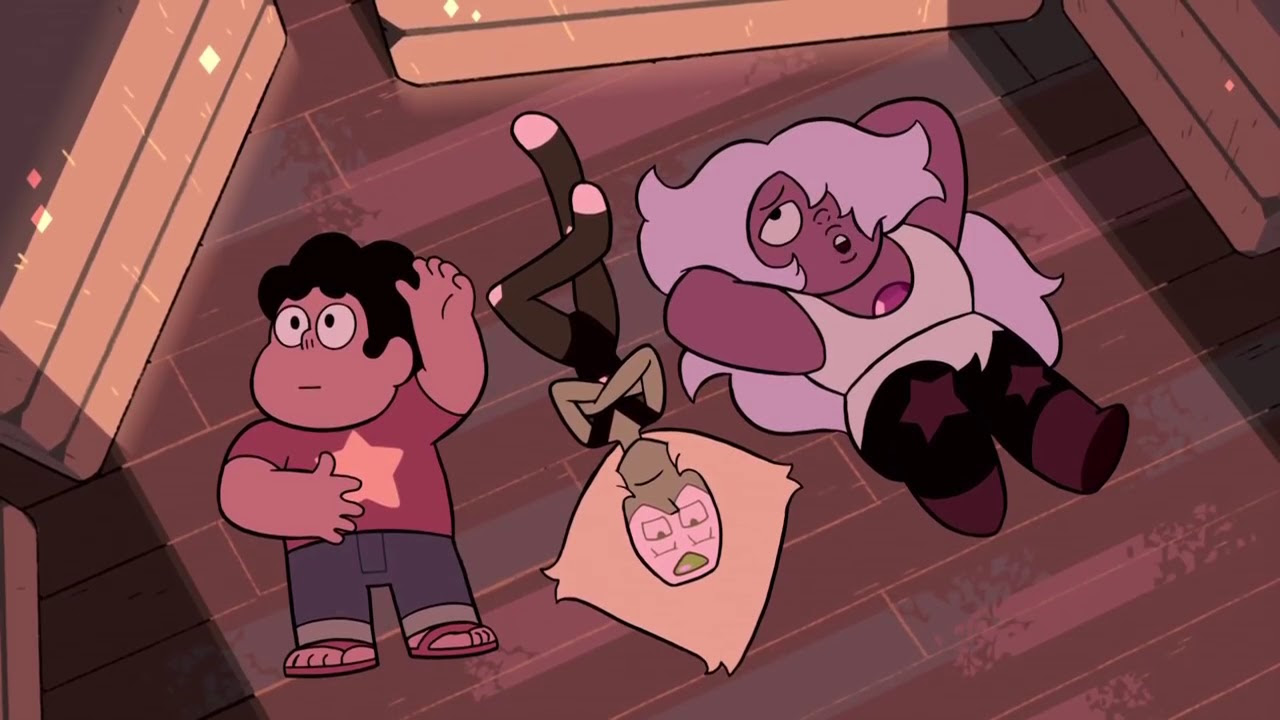 You know, I used to hate Peridot-centric episodes on Steven Universe. I was never really a fan of her character — thought she was unnecessarily cruel (even when she became one of the “good guys”), was just way too dark and pessimistic in general, and even found her voice grating. But her redemption arc (especially when she started getting close to Lapis) has been fascinating to watch, and she’s really grown on me, especially in episodes like this one.

It starts off with Steven frustratingly trying to get through his morning routine without using his bathroom, which has been occupied by a thoroughly depressed Peridot, heartbroken over Lapis leaving her in the previous episode. Amethyst comes up with the idea of getting some fresh air by going on a trip to the Kindergarten and drags her out of the bathroom. They take the train instead of the warp pad, describing it as the “scenic route,” but as Peridot says while curled up in the fetal position, “Your efforts to entrance me with Earth’s beauty are pointless. My sector of countryside was perfect. Now it’s somewhere in space.” Been there, girl.

At the Kindergarten she perks up a little when she gets to school Amethyst about the operations behind the Kindergarten, though she acknowledges that life doesn’t begin with the creation of gems, it ends when the resources are completely depleted in places like this to create said gems. The land is dry and barren in this Kindergarten—except suddenly they notice a flower, growing on land that shouldn’t be able to support it. Intrigued, they decided to plant more flowers there to try to bring life back to that land, something that both distracts Peridot from her Lapis-pain and also assuages the guilt she has from helping destroy that land to begin with.

Unfortunately, it turns out to be a fluke—everything they try to plant ends up dying, and that one miracle flower turns out to be just another corrupted Gem. It’s a real downer. But as they’re taking the train back home, they take a moment to notice how stunning their view of the countryside really is. The sunflowers are gorgeous. And as they admire the world around them, they realize that even if there’s nothing they can do for the land that the Kindergarten ruined, there’s still an entire Earth full of land to feed and nurture. As Amethyst puts it, “why don’t we try gardening in literally any other place?”

Clearly, this is all one big giant not-subtle metaphor. But damned if it isn’t an appealing one. Breakups are rough, and this one was rough, but there’s a lot more to this universe than one relationship.

Peridot: “All of the Amethysts are gone.”

Peridot: “Oh. All of the well-made Amethysts are gone.”

Amethyst: “Yo, not better.”