It starts off with Steven hanging out by himself, still devastated over Connie. (But not calling or texting her anymore. Looks like Greg’s pep talk from the previous episode really got through to him.) He gets a video chat call from Peridot, who’s with Lapis back at the barn and wants to FaceTime him. After gently chastising him for not checking in with him when he got back from Homeworld, they ask him what happened while he was gone. He starts to go in about his space adventure, but when he mentions that he was on trial in front of the Diamonds they get visibly upset, Lapis especially. And when he says that it’s okay because he ran away from them and was able to escape, Lapis yells “You ran from Blue and Yellow Diamond?? Peridot, we have to leave Earth now!” and hangs up on him.

Alarmed (understandably) he runs over to the barn to find Peridot trying to reason with Lapis. (“We can’t leave. What about all our crops?”) Lapis tries to explain how she feels— their transgressions against Homeworld are piling up, and Steven’s latest space adventure is sure to be the last straw. She thinks the Diamonds are coming once and for all to take their anger out on this planet, and as she puts it — gripping Peridot’s shoulder for frightening emphasis — she refuses to be a prisoner of war again. She wants to hide out in some remote part of space until it’s safe to come back to Earth, and will not be swayed otherwise.

Steven knows more than anyone else what Lapis has been through, bringing her back from the brink many times himself, so he understands her making this call, and tearfully says his goodbyes. And to make Peridot feel better, Lapis insists they take anything they want with them, and to prove it, she uses her powers to lift the entire barn up and prepares to take it with them to space. But just as they’re about to leave, they realize Pumpkin’s disappeared. Steven and Peridot go looking for him, and while doing so Peridot tells Steven how upset Lapis was after their video chat and how Peridot literally bent over backwards to cheer her up. Peridot says Lapis has “been through so much, and needs consistency.” Steven asks “what about you?” He knows Peridot doesn’t want to go. After they find Pumpkin she finally admits to him that she doesn’t, but says she doesn’t have a choice in this. This upsets Steven, who insists she talk to Lapis. 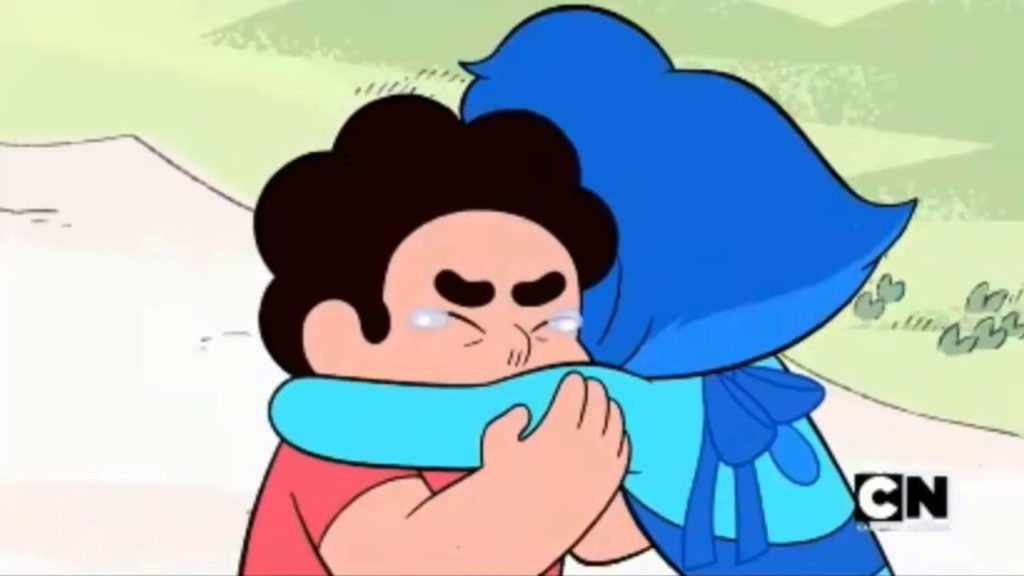 Lapis shows up and is happy they found Pumpkin and prepares for them to take off. Peridot looks at Steven and starts shaking, and finally, tentatively tells Lapis she wants to stay. Lapis is shook. Peridot tells her that if the Diamonds do come to Earth, she wants to be there to help protect her friends. Lapis asks why she didn’t mention this sooner. Peridot hesitantly says that there are many things she wants to say to her that she doesn’t because it would upset her, which of course upsets Lapis. Peridot makes one final plea for them to stay and protect their home, with an emphasis on “our” (they are so together!!).

But it doesn’t work. Lapis is too traumatized by the previous war to fight through a new one, even for Peridot. She flies off to hide in space alone, taking the barn with her, but leaving Pumpkin with Peridot. (So basically they just got divorced, and Lapis gets the house but Peridot wins custody of the kid. So, yay?)

Lapis…has been through a lot and has a history of projecting her anger and self-hatred toward the people in her life, the worst toward the only other person we’ve seen her in a relationship with: Jasper. And sadly, we’re starting to see some of that behavior being thrown at Peridot. I hate seeing them separated, but as heartbreaking as it was, maybe this is the best thing for them as individuals.

Peridot: “Wait! No! …You’re supposed to reward me for my emotional honesty!”