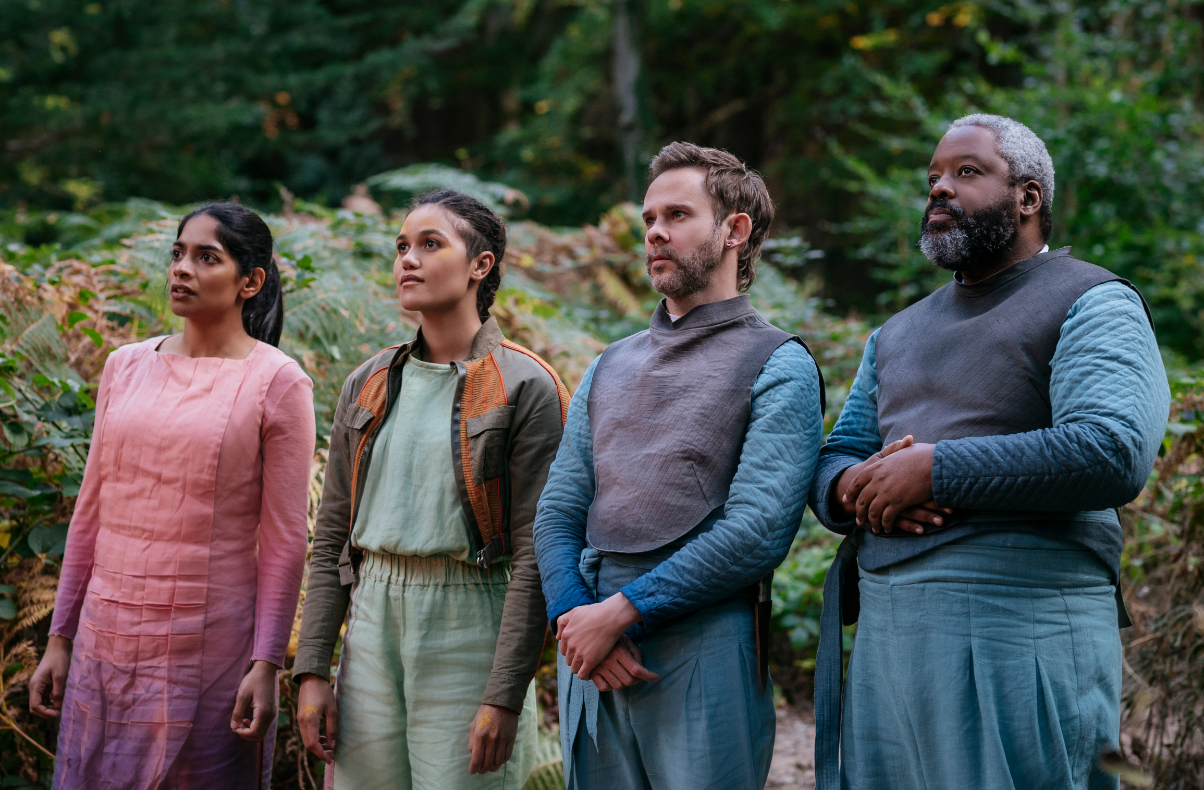 What happens when there’s a murder in a society created to be perfect? AMC+’s Moonhaven wants to give us the answer to that question.

Creator Peter Ocko’s (Lodge 49, Elementary) new mystery sci-fi series Moonhaven is a very slow-moving and slightly saccharine exploration of ethics and values vs. greed and power in a futuristic lunar utopia. One hundred years in the future, cargo pilot Bella (Emma McDonald, Queens of Mystery) is unexpectedly chosen to transport the envoy Indira Mare (Amara Karan, Doctor Who) to the moon colony by the envoy’s head of security Tomm (Joe Manganiello, True Blood) due to her military experience and expertise. When Bella becomes unknowingly involved in a murder/conspiracy she is befriended by lunar detectives Paul (Dominic Monaghan, Lost) and his partner Arlo (Kadeem Hardison, Black Monday), and the trio work together to solve the mysteries in paradise.

On paper the idea of Moonhaven is compelling. I was looking forward to watching the first four episodes. As Earth decays on all levels, the governments of the world prepare a moon colony using IO, a machine learning technology, to create a Garden of Eden on a sizable section of the Moon and solve all of humanity’s problems.

The colonists are peaceful, emotionally intelligent, committed to sustainable living, and have raised the youth in their communities with their values. The plan is to send a percentage of their trained youth back to Earth with the technology and ethics to save the planet. But what happens when character flaws begin to surface?

I was a huge Battlestar Galactica fan and thought Moonhaven would have the same kind of energy around it. Unfortunately, Moonhaven is nowhere close to even touching the excellence that was Battlestar Galactica. Moonhaven’s pacing moves at a snail’s pace. The costume design for the lunar residents is unfortunate. There were a lot of linen fabrics that looked wrinkled and frumpy on the actors, which was distracting. I kept thinking, was the steamer broken? Linen is so hard to keep looking crisp. The Earthlings’ costumes were textbook sci-fi fare, nothing was very notable about them other than they looked very uncomfortable.

Hardison as Arlo stands out in the first four episodes. The energy between Arlo and Monaghan’s Paul is delightful. The two are detectives in a society where there is no crime and people are universally kind. Whenever Hardison and Monaghan are onscreen together, the scenes are entertaining and easy to follow. The series is best as it follows these two characters’ evolution as detectives as they wrap their minds around being logical as they work to solve serious crimes. On the other hand, McDonald’s performance is monotone. In McDonald’s hands Bella is bland and boring, but to be fair the script doesn’t give her much to do with the character. Manganiello’s Tomm is overblown and annoying.

Moonhaven’s set design was clever and well-executed. There was a clear contrast between the polluted decay and violence that was planet Earth and the serene oasis on the Moon. The opening sequence of Moonhaven works well, showing how artificial intelligence sparks life on the Moon through one green seedling. The cinematography is appealing and makes sense with the storylines. The characters navigate through lush green forests, there are vast bodies of pristine clear water, and the weather is always warm. On Earth we see people having to navigate their way around in the toxic air with futuristic masks, pools of polluted water and architecture made to protect folks from the elements are all designed excellently.

Back on the Moon, I loved the detailing of having the Earth and the Sun in the sky as compliments to one another in the background. Just when you almost forget that the action is taking place on the Moon, a shot with the Earth in the sky reminds us that the atmosphere is always dependent on artificial intelligence in order to exist. The lunar colonist’s total dependence on the IO machine learning technology for all of its resources gave me this underlying sense of fear in relationship with the characters. What would happen if someone was able to hack into the IO to sabotage the oxygen levels? Would they all be able to evacuate? In the first four episodes, there is a slight hint to how food is produced. I would have liked to have seen more.

Moonhaven’s plotlines are predictable and unsurprising. Olafur Arnalds is one of my favorite contemporary composers, but his score for Moonhaven sounded like a mediocre new age meditation CD on repeat.

AppleTV+’s For All Mankind is a sci-fi series I’ve been in love with for three seasons. It’s part alternate history, part sci-fi where the US actually goes farther in the space race than we do in reality, and the Moon is colonized in the 1970s. The stakes of living on the Moon as a harsh environment have been embedded into my mind from that series. As I was watching Moonhaven I had to do a lot of work to believe that in one hundred years human beings would be able to create a Garden of Eden on the Moon with gravity, water, and a liveable atmosphere.

Moonhaven’s writers don’t really detail how the IO was able to play God and grow trees and create the water that could sustain life on the Moon. The murder mystery aspect of the script is the main focus of Moonhaven creating a kind of Sherlock Holmes situation, which is overdone.

Another of my favorite sci-fi shows that reflect a dystopian future is HBOMax’s Station Eleven. It only goes about 20 years in the future but really reflects how an artistic utopian culture would work and how those values would be challenged in such a watchable way. Moonhaven has some elements of structural beauty but after watching the first four episodes, I wasn’t engaged enough to want to find out how the mystery is solved, which is unfortunate.

The Stars of ‘Moonhaven’ Discuss Traveling to the Moon

Clarke Peters from ‘La Fortuna’ on the Beauty of Acting