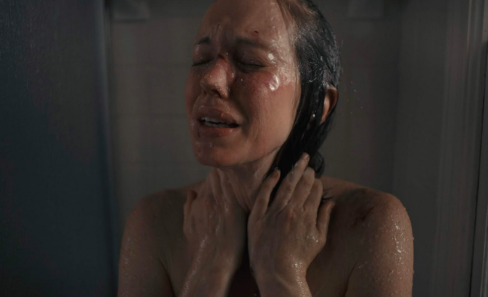 The film Blood on Her Name (2019) constructs a beautiful, feminine picture of a grotesque act of murder.

The movie starts and ends with a person in a pool of their own blood. This scene, in no uncertain terms, bonds together the concept of crime and punishment. The opening scene is used to enhance not only the beautiful cinematography, but to pose an interesting question: Can we break from our history or are we destined to repeat our past?

Blood on Her Name has created a narrative, dialogue, and characters that feel authentic. The success of this lovely southern gothic neo-noir film is largely due to its visionary director, Matthew Popes. Popes is the co-writer of his debut film, and Don Thompson is the producer and also a co-writer. They have structured this story in such a way that the final product is a seven-layer cake — so delicious through the last bite.

The film is executed with precision and accuracy by actors such as Bethany Anne Lind, who plays Leigh Tiller, the main character of the film. Leigh is a mother who struggles to keep her life from falling apart. Will Patton plays Richard Tiller (Leigh’s father), a corrupt cop who tries to do what he believes he must to protect his family. Elizabeth Röhm plays Dani Wilson (the widower), who is out for blood. Jimmy Gonzales plays the love interest to Leigh. Lastly, Jared Ivers plays Ryan Tiller, a troubled teen on parole. Ivers plays this role with the accuracy and attitude of a teen. With each character that is introduced, the plot thickens and becomes that much more complex.

The film opens with a pool of blood, a dead man, and Leigh grabbing a wrench. Each piece manages to create an air of mystery that both draws the viewer in and allows them to imagine, if only for a moment, what happened before the film even started. This suspense is compounded by the constant flashbacks Leigh has and by the majority of crimes that are committed under the protection of nightfall.

The struggling single mother, Leigh Tiller, tries to do what she believes is the right thing but is misguided. A death occurs, and it is uncertain as to who is the culprit here. The film makes it painstakingly clear that these characters are not without their faults. Each one has a delicious story of their experience with a crime or act of violence.

A family of criminals and its pattern is what this film ultimately touches on. Leigh’s husband is in jail for auto theft. Leigh through a drug induced sequence remembers a crime that her father committed. She remembers finding a pool of blood and not knowing what to do. Her son Ryan is on probation for injuring another person. Each member has committed a criminal act that repeats from one generation to the next.

Leigh proves to be a master weaver as she strings together aspects of a story that she tells each person she encounters. She gives each character — Richard, Dani, Ryan, and Jimmy — a different account as to what happened. This weaving of stories proves to be an effective method at keeping each character at arm’s length while creating more suspense for the audience. Each character is unaware of the facts surrounding the death in the opening scene. This continues to develop as more and more characters are introduced to the narrative.

Almost every aspect of the Tiller family’s life has been touched by crime. How then can anyone be expected to be a good person? This perception of what makes a good person begins to unravel. The phrase “good” is often thrown around, yet it isn’t until the closing scene that this word is understood in relation to each character. Leigh often calls her son a good kid. As we find out in the film, Ryan Tiller has been in trouble with the law. A scene with Ryan’s parole officer makes it clear that he is not above violence. Yet this idea of what makes someone good is malleable.

In the concluding scenes, the film performs a full circle with a pool of blood, a wrench, and crimes. How each character reacts to these events reveals something about human nature. Even when an individual is born in chaos and crime, they can always choose to be a good person. However, that choice to be good is not always an easy or rewarding one.  For anyone looking for a suspenseful mystery film for a good night in, this film comes recommended. The film proves without question that we are not responsible for our fathers’ sins, but we do carry the burden of knowing or maybe even not knowing what those sins are, proving that we don’t have to be a product of our past.

This maybe Matthew Popes’s debut film, but it is hopefully not his last. With a film as rich and complex as this one, only time will tell if he will be able to create a work that parallels what he has done in this one.