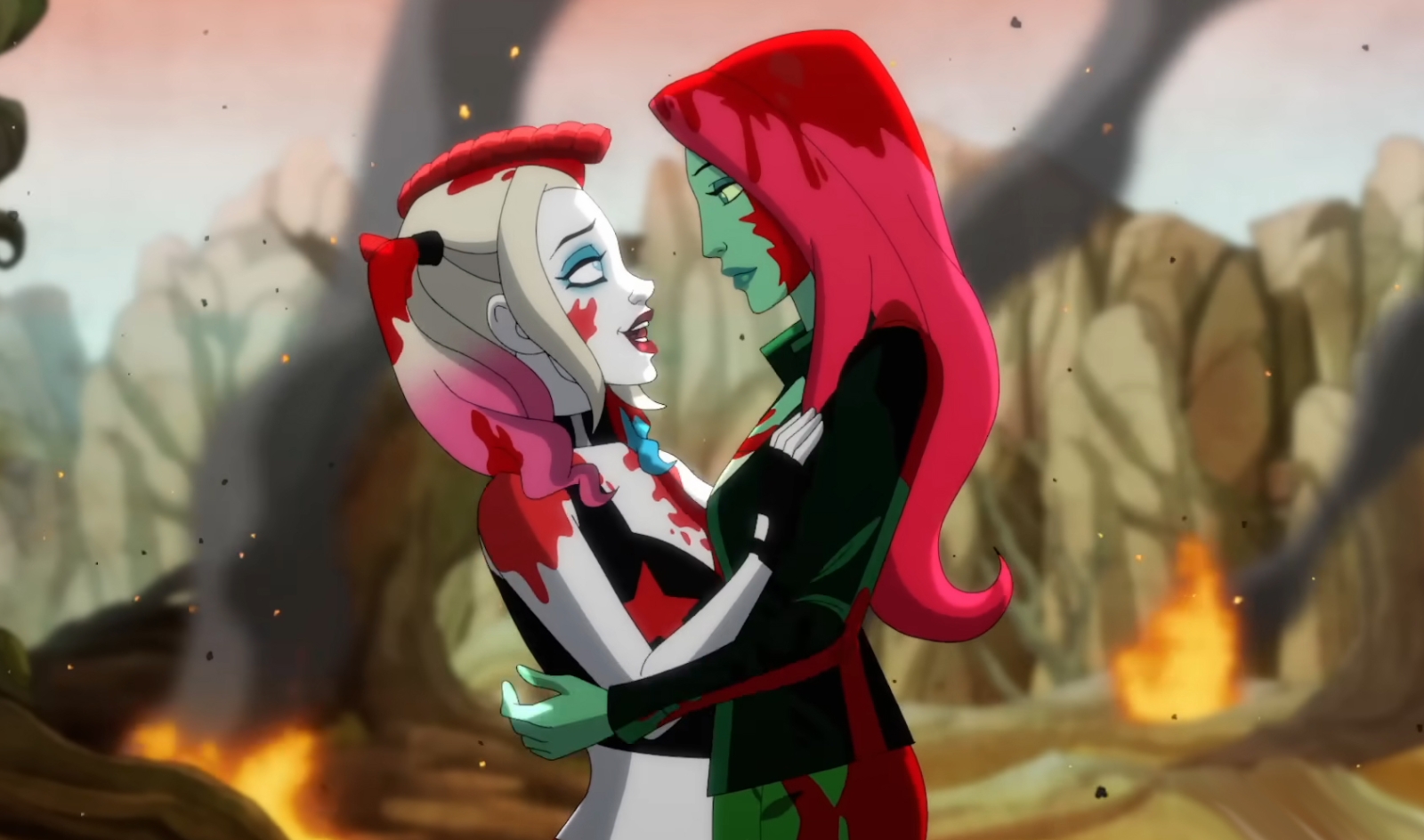 Harley Quinn is finally back with its third season and has a new home on HBO Max. The first two seasons of the hit Max Original aired on the now defunct DC Universe platform, premiering in November 2019, with the Season 2 finale in June 2020. Two years is quite a long gap between seasons but the show’s creative team, led by co-showrunners Justin Halpern and Patrick Schumacker (Abbott Elementary), made sure it was worth the wait.

Season 3 picks up where we left off with Harley Quinn (Kaley Cuoco) and Poison Ivy (Lake Bell) riding into the sunset after Ivy decides not to marry Kite Man (Matt Oberg). The new couple, dubbed “Harlivy,” travel around in Wonder Woman’s invisible plane, bashing heads and living off of the credit card of Commissioner Gordon (Christopher Meloni). Taking a break from their Eat. Bang! Kill. Tour, Harley and Ivy return to Gotham to bust King Shark (Ron Funches) and Clayface (Alan Tudyk) out of Arkham. The crew reassembles, including the uproarious Frank the Plant (J. B. Smoove), and goes right back to planning more capers. But this season, Ivy is the evil mastermind, and her diabolical plan is to terraform Gotham City.

Harley hypes up her woman every chance she gets, encouraging Ivy to embrace her inner baddie and create the Eden paradise of her dreams. But they also go through the typical ups and downs in any relationship, and Harley struggles with her own identity as a villain. For anyone concerned that Harlivy will fall victim to the break-up/make-up trope, don’t worry. Halpern and Schumacker shared in an Instagram Live AMA that there won’t be any question of, “Are they gonna break up? Are they gonna stay together?” because the writer-creators want to “see them together as a couple.” As do we!

The first season focused on the end of Harley’s historically toxic and abusive relationship with the Joker (Alan Tudyk) and her journey to establish herself as her own person, while Season 2 followed her growing romance with her plant goddess bestie. Now that Harley and Ivy are BFF-GFFs, the story very much focuses on them as Gotham’s new power couple, particularly how they make it work with their differing personalities — the codependent, emotionally intense Harley and the closed-off, humanity-averse Ivy. The road to their romance was messy and chaotic, so naturally, their relationship would be the same, except now there’s tons of bangin’.

Harlivy isn’t the only romance this season, though. We also see the rocky relationship of Batman/Bruce Wayne (Diedrich Bader) and Catwoman/Selina Kyle (Sanaa Lathan), sans the infamously axed oral sex scene. Introduced last season, Lathan’s sultry and witty Catwoman is the perfect combination of Eartha Kitt and Michelle Pfeiffer. Bader doesn’t get enough credit for his Batman/Bruce Wayne, though the show may not depict him as the skilled detective we know and love. One episode has Harley and company, with the help of former crew member Dr. Psycho (Tony Hale), entering his mind, an interesting place to say the least. The series has paid homage to Batman: The Animated Series since the beginning, but this particular episode takes it further with the style and music.

Joker gets a “stand-alone-ish” episode, where we see the former Clown Prince of Crime’s suburban life with his new family. A domesticated Joker may sound boring, but seeing him struggle with mundane things like helping his step-son with common core math is anything but. As seen in the trailers, he dons the red and green colors of Joaquin Phoenix’s version, even doing the now iconic dance down the stairs. I won’t spoil anything, but just know that the catchy tune accompanying the scene is filled with references to the character’s many incarnations. (And speaking of music, there’s a completely unexpected Sum41 reference that this reviewer greatly appreciated.)

ALSO READ
Review: Everyone is Messy on the Apple TV+ Thriller 'Surface'

One of the subplots this season follows Gordon’s mayoral campaign, led disastrously by Two-Face (Andy Daly). He seems a little less desperate for Batman’s attention but is still plenty obsessed with calling the Dark Knight his best friend and capturing Harley and Ivy. And with Joker as his running mate, old Gordo’s not doing so hot. As Joker states, “I’m both a maniacal force of nature and want universal health care, so I’m running for mayor!” Who can compete with that?

Other supporting characters return in varying degrees of prominence, like Riddler (Jim Rash), Nora Fries (Rachel Dratch), Tawny (Tisha Campbell), Alfred Pennyworth (Tom Hollander), and the lovable Kite Man. In April, it was announced that Kite Man is getting his own spinoff series, Noonan’s (working title), focusing on his purchase of Gotham’s seedy dive bar and his new girlfriend Golden Glider, who also makes an appearance in the third episode of Season 3. Several characters in Harley Quinn could easily lead their own spinoffs, like the buffoonish, perceptually vengeful Bane (James Adomian). While there are no plans for a solo show, Bane will also have a big role in the upcoming Kite Man series.

Season 3 introduces some new DC characters to the show, including Amanda Waller (Tisha Campbell), Swamp Thing (Sam Richardson), and Music Meister (Larry Owens). Like the rest of the talented voice cast, Campbell (who also voices talk show host Tawny), Veep’s Richardson, and Abbott Elementary’s Owens all do an incredible job making the characters their own. Filmmaker James Gunn (The Suicide Squad) makes a cameo as himself, directing a biopic about Thomas Wayne, starring Billy Bob Thornton (Fargo), who also plays himself. Clayface, desperate to be a part of the project, molds himself into a chair just to get in Gunn’s good graces. There’s also the Court of Owls, which turns out to be one big orgy of Gotham’s elite. (But Batman couldn’t go down on Catwoman? Hmm…okay.)

This season welcomes a new member of the bat family — the super serious and totally stable Nightwing/Dick Grayson (Harvey Guillén). The hero returns to Gotham ready to prove himself as Batman’s equal and no longer his sidekick. He butts heads with Batgirl/Barbara Gordon (Briana Cuoco), easily one of the most endearing characters in the series. Guillén, known as Guillermo de la Cruz in What We Do in the Shadows, has a hilarious take on the protector of Blüdhaven.

Harley Quinn expands its roster of three-dimensional DC A-listers and D-listers and everyone in between, growing its brilliant voice cast, but still focusing on the heart of the show — the wild and sweet relationship of Harley and Ivy. The series stays consistently entertaining while adding more layers to its characters and balancing emotional storytelling with raunchy humor and bloody action. The world of animation offers an almost limitless landscape of possibilities that Halpern and Schumacker skillfully embrace.

The third season of Harley Quinn debuts with three episodes July 28 on HBO Max, followed by one episode weekly through September 15.