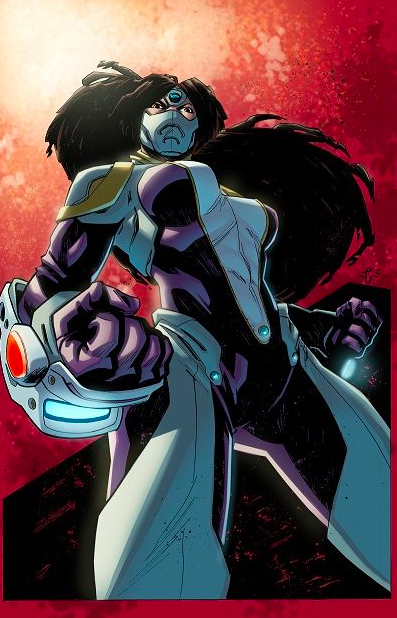 For the last half-century, there has been a movement towards replacing the ever-screaming, slap-worthy damsel in distress, with the take-no-prisoners, cursing, shield-maiden-to-no-one heroine.

Lois Lane has finally figured out how to rescue herself, on most days. Wonder Woman basically saved the day and stole the movie in her first DC cinematic outing alongside Superman and Batfleck. Captain Marvel saved Tony Stark in the latest Avengers flick, only for him to die shortly after she kicked the crap out of Thanos.

With all this, right now the most well-known Black female character, Storm, has a bit part in the most recent X-Men movie as Sansa Stark becomes the most powerful entity in the universe and no one cares. In comics, the female warrior oriented theme continues to progress with the times to now include a sexual orientation element. Of late the major comic publishers have brought forward America Chavez, a cis-lesbian Latina superhero, into the mix for a time in the Marvel comic universe, and as we have covered here at BGN, David Walker and Brian Michael Bendis have launched a new cis-hetero African-American heroine from Oregon named Naomi to fly beside Superman in the current DC Universe event (see Action Comics Issue 1015).

So the question is, where are all the Black female superheroes? The independent publishers still dabble here and there, and at the conventions, there are those who are looking to fill the void. With the relative ease of self-publishing, gone are the black-and-white sketched, partial storylined, photocopied, and stapled issues of old. A rather complete looking first issue is frequently, drawn, inked, colored, and sold at conventions now.

From Essential Comics, BGN selected one of its main titles named Quantum to review. Quantum is written by Van “Coach” Monroe, penciled by Harold Edge (Dynagirl), and colored by Alonso Espinoza. The Quantum Special Convention Edition was interesting from the start as the Coach chose to present its heroine’s dialogue in her native Jamaican jargon to the extent possible. In many other titles, the writers choose to pepper the dialogue here and there with foreign words that don’t translate well or catchphrases to distinguish the character. For example, the X-Men’s Rogue is known for her constant use of “suga’” reminding us of her Southern roots and the occasional “mon chere” from her husband Gambit alludes to the history of his native Louisiana as well.

Given that most American ears are not well-trained for dialects distinct from their own, this choice for Quantum was a risk. Unlike Harriet Beecher Stowe’s Uncle Tom’s Cabin, the jargon added a burden to the conversations that weighed the storytelling down, which is a shame as the visual storytelling aspect really complemented the plot. The frequent bleeding of elements of one frame into another was just enough to make the action seem more present without being distracting or confusing the connectivity of the frames.

When BGN talked to the Coach, he represented that the character of Quantum was the most powerful in the Essential Comics’ universe. Her name is derived from her ability to control particles at the atomic and subatomic levels. In introducing the character, the opportunity to display that ability was underplayed as her powers were primarily introduced by scenes of her punching things and emitting laser beams. I get that the effect of the manipulation of particles is definitely covered, it just seems like an opportunity to put forward a more unique array of abilities was overlooked. Of course, this could be part of the plot as the first introduction to Charletta “Willow” Washington — Quantum — is in a training facility. Given the ending of the first issue, I wonder if the former Navy Seal should have stayed there instead of engaging with her first opponent, the Behemoth, who wipes the streets with her until her knight in shining armor arrives. While I am all for having a strong female lead, I am not one of those who believes the lead needs to be all-powerful at all times. I mean, even Superman gets his butt whooped here and there. But ending her first real engagement on her back looking up? Come on, Coach!

Quantum seems to suffer from the passing of time as the measure of a heroine continues to evolve, interconnected to the morphing of a woman’s value to the community. While Quantum has a compelling back story, with great abilities, and seemingly a formidable opponent, this first issue doesn’t seem to be enough to make you care whether she survives the Behemoth or not. As such, I’m not sure that the title or the character is ready yet for the challenges to come. However, I think all the elements for a great heroine are there, so I will be on the lookout for the next issue, to see if she gets it together or joins the pantheons of old tied to the train tracks waiting for a rescue.