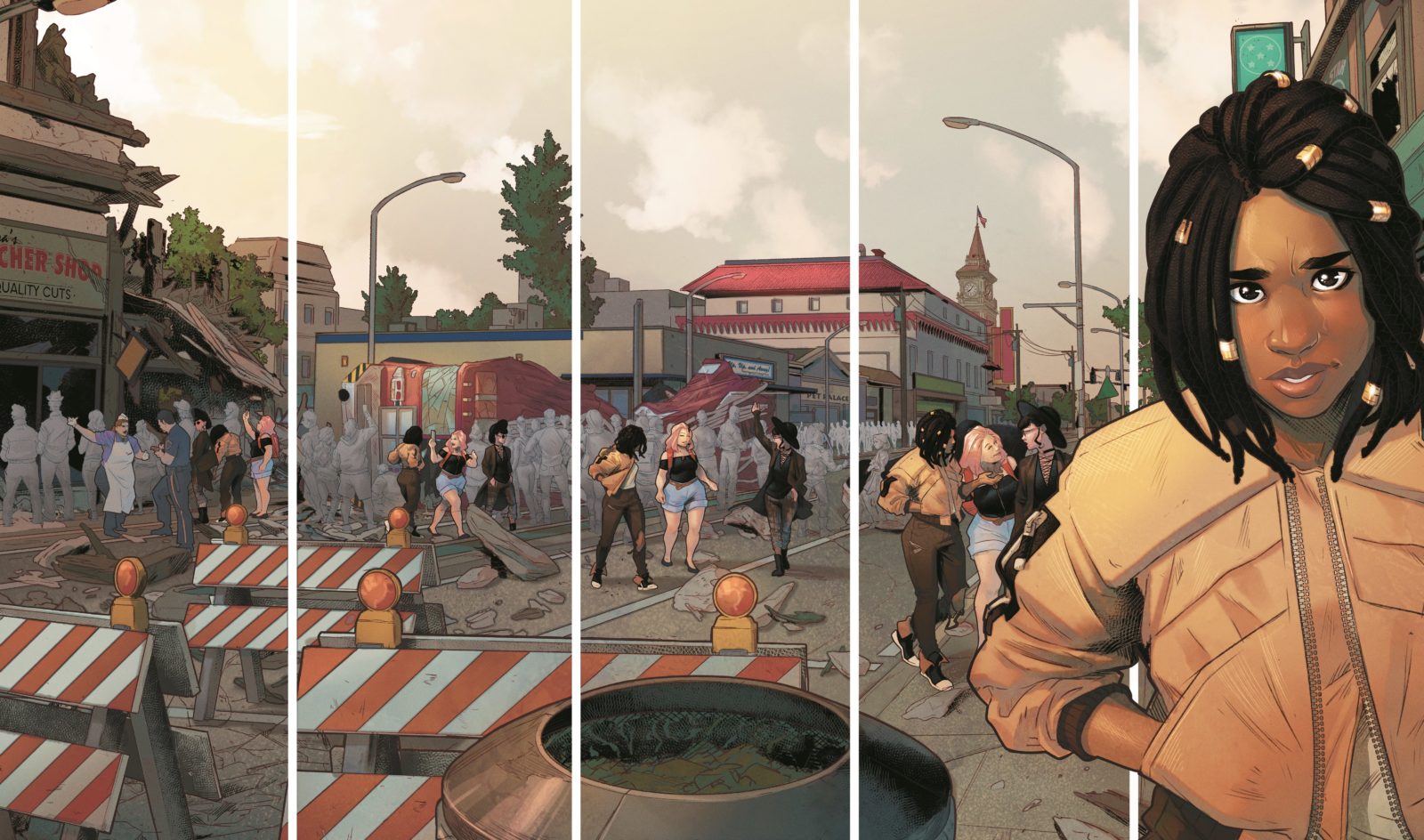 It’s not that often that you see non-cape-wearing characters lead a comic title or show like Naomi #1, the intriguing new comic written by Brian Michael Bendis and David Walker.

DC Comics took a swing at non-cape heroics with Richard Grayson, previously known as Robin currently going by Nightwing, back in 2014 in the comic Grayson. On the small screen in 2017, DC experimented with Powerless, a sitcom featuring Bruce Wayne’s cousin as he cleans up the aftermath of superhero world-saving. A few of the most memorable non-cape-wearing leads, like in the comic Alias featuring Jessica Jones or the comic and later Netflix series Jessica Jones, come from the mind of award-winning comic writer Bendis. Bendis, whose credits include writing for most of the Marvel Universe’s caped heroes in addition to Jessica Jones, teamed up with David Walker (Luke Cage, Occupy Avengers, Power Man and Iron Fist) and up-and-coming artist Jamal Campbell on the recently released Naomi. 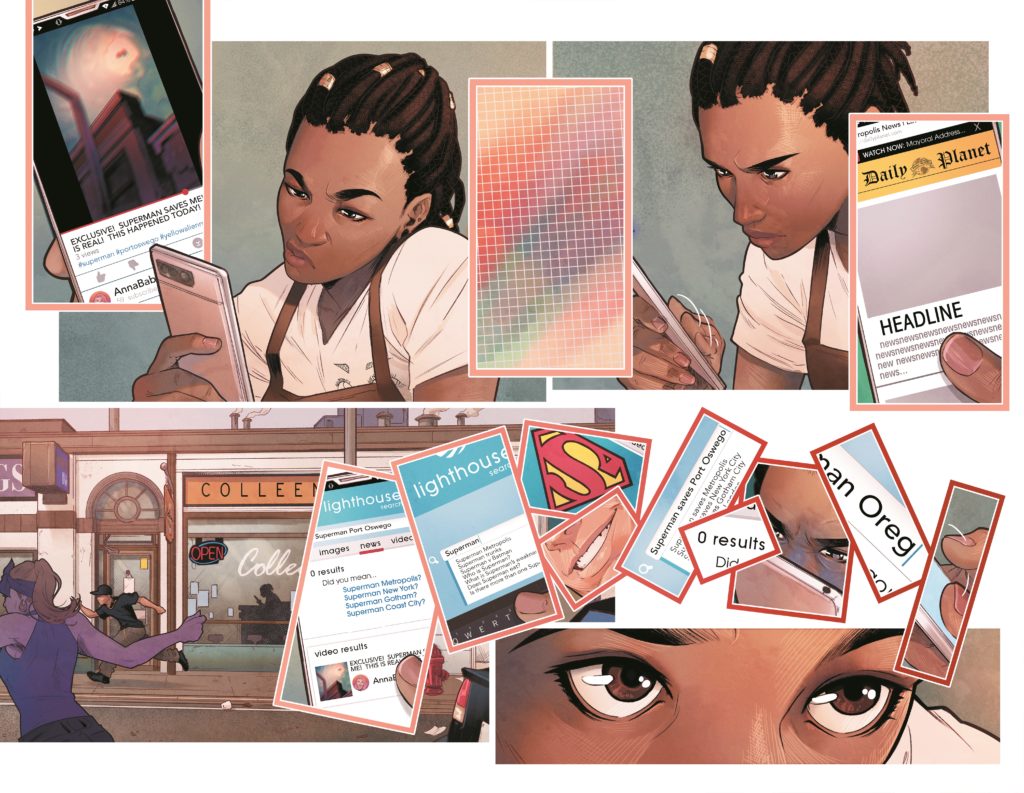 This is the second title from Bendis’ new collaboration with DC Comics imprint Wonder Comics. The titles in Wonder Comics are intended to focus on teens, and the books follow the kind of titles we expect from Bendis, with the obligatory caped superhero contingent and a good old-fashioned mystery title. Enter Port Oswego, Oregon, the scene of one of Superman’s latest battles and the biggest thing to happen in the town in recent memory, which of course our protagonist Naomi missed. Taunted by her friends and haunted by a feeling, Naomi returns to the scene of the crime, as does Superman — him to do some clean-up and her to get some answers on why her parents put her up for adoption and where she originates.

Bendis, along with Walker, manages once again to merge seamlessly with their artist to produce a great title. It’s obvious that Bendis and Walker have spent time around teenage girls, as their cellphones serve almost as another character. Featuring artist Jamal Campbell, it’s wonderful to have a title that features a Black female character drawn by someone who apparently knows what women look like. Campbell explores the curves, or lack thereof, of Naomi and her friends — far from the Barbie doll measurements we’re used to seeing by most artists. Also another plus is someone who can actually draw a Black girl’s natural hair.  Campbell has been killing it with some awesome cover work on Black Panther, Shuri, and Star Wars, as well as his work in late 2016–2017 on the regular series Prowler. 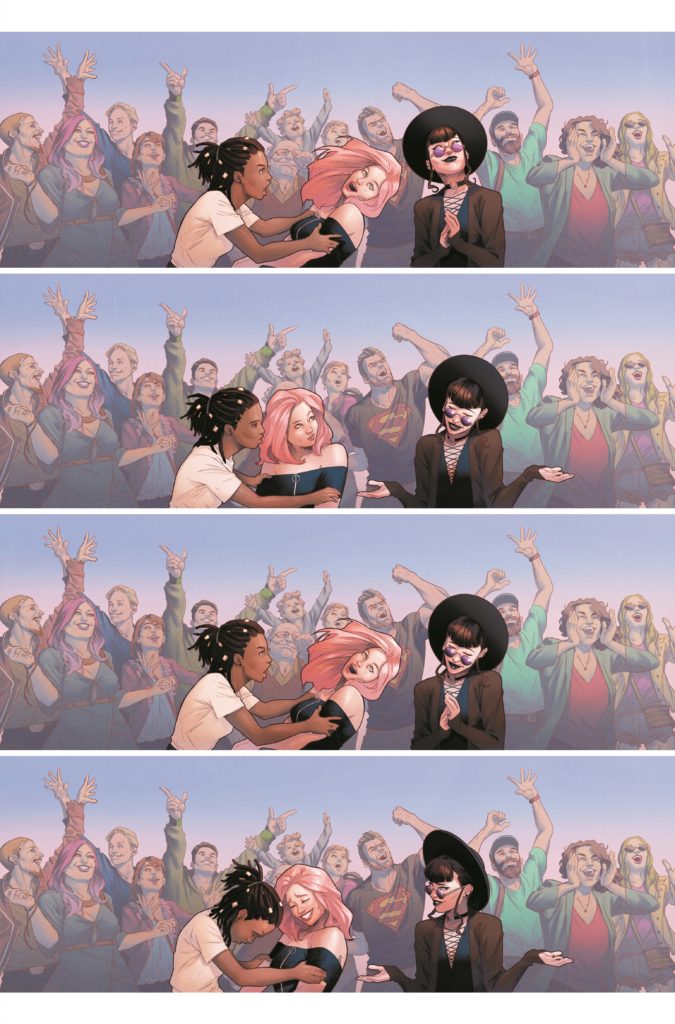 The idea of an enduring Black female superhero is way past due. Without cheating, name 10 Black female superheroes, not siblings, sidekicks, or romantic interests… superheroes. I’m sure given some recent television/movie offerings you probably named Storm from the X-Men first, cartoon aficionados may add Bumblebee and Vixen. Where to next? Anyone who listens to our creator’s vlog will add Misty Knight. Then from TV, folks will include Black Lightning’s daughter, Thunder. Comic book nerds may add Captain Marvel/Photon. Then there’s the recent reintroduction of Livewire. What’s left are one-shot appearances and alternate universe characters. Part of the mystery of this story is whether Naomi ends up a story of superhero collateral damage or the origins of a new hero.

Naomi takes us into the world of teenagers as they try to process the normal identity issues of being their age with the added complication of superhero interventions and the mystery of Naomi’s past. This comic book is not only one to pick up, but you should place this one on your pull list.