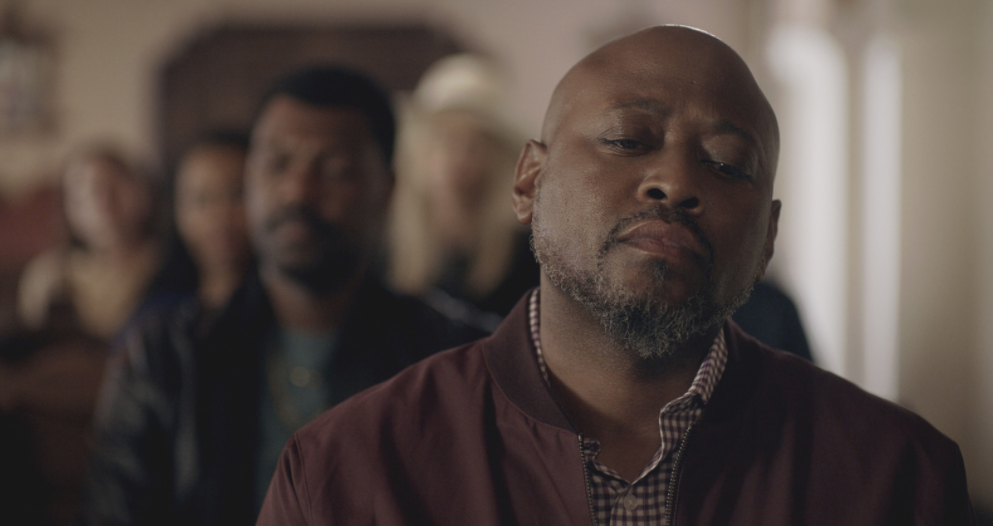 Blood is indeed thicker than water and family ties are tested in the new dramatic thriller from Lionsgate The Devil You Know. Writer/director Charles Murray (Sons of Anarchy, Luke Cage) pulls together an all-star ensemble cast in this family drama that pushes the boundaries of morality and loyalty in circumstances beyond anyone’s control.

Marcus Cowans (Omar Epps) is on the road to redemption. A former addict, he spends his days going to recovery meetings and his evenings with his family trying to heal old wounds and get his life back in order. While most families get together only on special occasions, the Cowanses frequently break bread with each other. They are a close-knit group who care for one another deeply.

However, while the Cowanses appear to be a picturesque family, outward appearances can be deceiving. As it turns out, Marcus discovers that one of his brothers, Drew (Will Catlett), was involved in a tragic homicide that left two people dead and a young teen badly injured. When Marcus learns that Drew possesses sports cards that were found in the same home where the double murder took place, his suspicions about his brother’s involvement are heightened.

Drew denies his involvement and mentions he got the cards from a third party, so Marcus is left with choosing whether to let the issue go or to follow his instincts. What further complicates matters is that Marcus himself was once incarcerated for a crime that he didn’t commit, so he’s not so quick to accuse his brother of being guilty of crime here. Marcus understands the weight of injustice from a fractured and unlawful justice system and doesn’t want to see his own flesh and blood fall into that same trap. While Marcus is dealing with this conundrum, he’s under scrutiny by a curious detective (Michael Ealy), who is investigating the double homicide.

The Devil You Know establishes a firm foundation of who the Cowanses are as a family unit. While the film at the start shows the initial break-in and murder of the innocent victims, who are key components to the plot, the story then lays the groundwork of each of the family members and explores a romantic arc for Marcus before digging deep into the crime element of the plot. Marcus’ mother (Vanessa Bell Calloway) urges her son to connect with Eva (Erica Tazel), and sparks fly immediately. Marcus can finally turn a new leaf post-incarceration and bring a partner into his life.

While Marcus is indeed our protagonist and is the center of our story, it is the mystery and B-plot of what is happening in Drew’s story that brings this film’s narrative to a head. It’s quite clear from a directorial standpoint that Murray wanted to focus mostly on the familial aspect of this story. And while this is an excellent vantage point to start and build from, unfortunately it compromises the pacing of the story. The pacing does slow down after a great deal of expository build-up of Marcus’ character within the first two acts of the film. Marcus is a former addict, and many scenes focus on his recovery process. While it is important to highlight this aspect of Marcus’ life, much of it felt extraneous to the story.

The real tension comes from the narrative of Drew and his dealing with an unsavory group of guys who could have been involved in the double homicide. Stacy (B.J. Britt) and Al (Theo Rossi), who are friends with Drew, are the possible suspects. When Marcus interacts with these men, he’s immediately suspicious of their intentions, and they are equally suspicious of him. The film’s pacing ramps up a bit and the thrill of the suspense between these players intensifies whenever their scenes come up.

I would have preferred the film’s story to be focused more on the drama that ensues between Drew, Al, and Stacy and further diving into his motives as opposed to Marcus’ road to redemption narrative.

The cast of The Devil You Know is incredible and the performances are stunning to watch. Marcus’ father (Glynn Turman) is the patriarch of the family, doing his best to hold everyone together. Other notable actors in The Devil You Know are Curtiss Cook, Vaughn W. Hebron, Michael Beach, Keisha Epps, and Ashley A. Williams. Both Epps and Ealy serve as executive producers on the project.

The Devil You Know offers a compelling story, with plot twists and is a harrowing drama.  However, the pacing and method of execution to tell the story needed some tweaking to keep the viewer engaged throughout its 116-minute running time.

The Devil You Know premieres in theaters April 1, 2022.