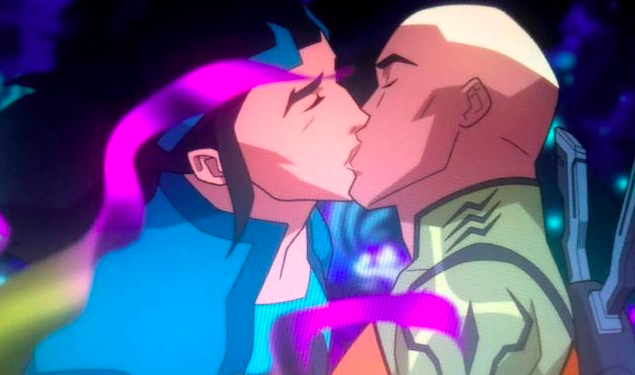 Social media was recently ablaze with debate regarding an episode from the third season of Young Justice when Kaldur’ahm (previously Aqualad and now Aquaman II) shared an onscreen kiss with boyfriend and fellow Atlantean Wynnde, a member of King Orion’s underwater court.

Not surprisingly, this has triggered more than its share of backlash. Not only was the ire coming from incels and racist dudebros but fauxteps and wokemon as well — the latter upset at the media’s “gay agenda” to “emasculate” the Black man. Then there were some “authorities on Blackness” who were irate that the Gay Black superhero is in a relationship with a white man. I wish I could be shocked by this, but I’ve endured this crap too often myself and recognize this as art imitating life.

Of the entire ensemble cast that comprise Young Justice: Outsiders, there were six Black male leads: Black Lightning, Green Lantern/John Stewart, Kaldur, Static Shock, Malcolm Duncan, and Cyborg. Each of these men were in various stages of relationships. Black Lightning is divorced and was involved for a time with Dr. Chase. As he reiterated multiple times, Static Shock was desperate to find a girlfriend, and Malcolm is in a loving relationship with Karen Beecher (Bumblebee) who later in the season gives birth to their daughter Rhea. So the argument about some “agenda” to emasculate the Black man is as absurd as the insecure homophobes claiming it.

Kaldur’s orientation has no bearing on his masculinity or his skills as a superhero. Was he any less of a formidable, regal, precocious, master strategist and capable leader of Young Justice after his orientation was confirmed? The only agenda being pushed in terms of visibility of LGBTQs is our eradication. It’s been well documented that the FCC and other institutions have censored cartoons and other television shows from featuring LGBTQs. A prime example would be the hit WB series Static Shock and specifically his best friend and eventual crime-fighting partner, Richie aka Gear. The late Dwayne McDuffie previously explained that because of broadcast regulations being what they were, they wouldn’t allow his best friend to be out as gay on a Saturday morning cartoon. This is why Richie’s surname Stone was changed to Foley for the cartoon, and any hints regarding his orientation were reduced to visual codes such as a single pierced ear. This is also why the only times you saw LGBTQ characters in cartoons were either in prime-time adult cartoons, like The Simpsons and Family Guy, or on premium subscription networks like Netflix or DC Universe. Funny how there was none of this outrage a few years prior when Kaldur was canonically established as an LGBTQ in the comics.

The truth is the issue is much bigger than Kaldur. It’s the (mis)treatment of Black LGBTQs in the media and in society. Belonging to the two most despised demographics on the planet, Black LGBTQs are often an exiled people. In mainstream (read white) gay spaces, Black LGBTQs must suffer virulent racism and antiblackness. While the Black community is far more progressive and welcoming than most, it still has a long way to go. FX’s Pose star Angelica Ross reminded us of this when she rightfully called out BET’s Black Girls Rock for excluding transwomen and girls. But given the network’s history of antiblackness and homophobia, one shouldn’t be too shocked by this.

While improvements have been made in terms of LGBTQ portrayals and representation, most of said improvements belong to white protagonists. Of the few exemplary PoC portrayals, hardly any of them are Black. As I discussed previously, queer PoCs are often forced to take our victories where we can find them. It’s already next to impossible to find decent narratives with nonwhite heterosexual protagonists. Nonstraight Black men, for instance, are generally reduced to “down-low” gangbanging Mandingo savages or over-the-top gossipy flamboyant caricatures who serve as the punchline to every homophobic and racist joke. At best, we’re the sidekicks and relegated to supporting roles. We aren’t afforded the same humanity and complexity in our depictions as white queer protagonists are. A prime example would be a recent conversation I had with my publisher regarding a list of superb LGBTQ films that I would recommend to viewers. When asked if I could compile a list of Black LGBTQ films that I would recommend, I could only list three films—and two of them were documentaries. That should not be the case. That should never be the case.

Black LGBTQs deserve better. When I look for Black LGBTQ superheroes on television who imbue me with pride, my options should be more than Kaldur, Thunder (CW’s Black Lightning), Kelly Olsen (CW’s Supergirl), or Valkyrie. I’ve stated before that Afrofuturism will save us all, and now more than ever, I believe this to be true. Which is why I’m turning to my fellow enlightened Griots, artists, and creators—those who use their artistry as magic to make this planet a better one.

Instead of another superhero in the spirit of say Luke Cage, let him be a superhero who happens to be in a same-gender loving relationship. Let the next action-packed urban fantasy feature a Black heroine of the trans experience. Challenging oneself to write outside the proverbial box not only levels you up as a human being but also as an artist. With any luck, your audience will evolve for having viewed your work. Skeptics and naysayers need only look at Dirty Computer and Milestone Media. Both are prime examples of artistry that continues to set the standard of excellence. Your work could also yield a similar impact—and that’s why it’s needed.