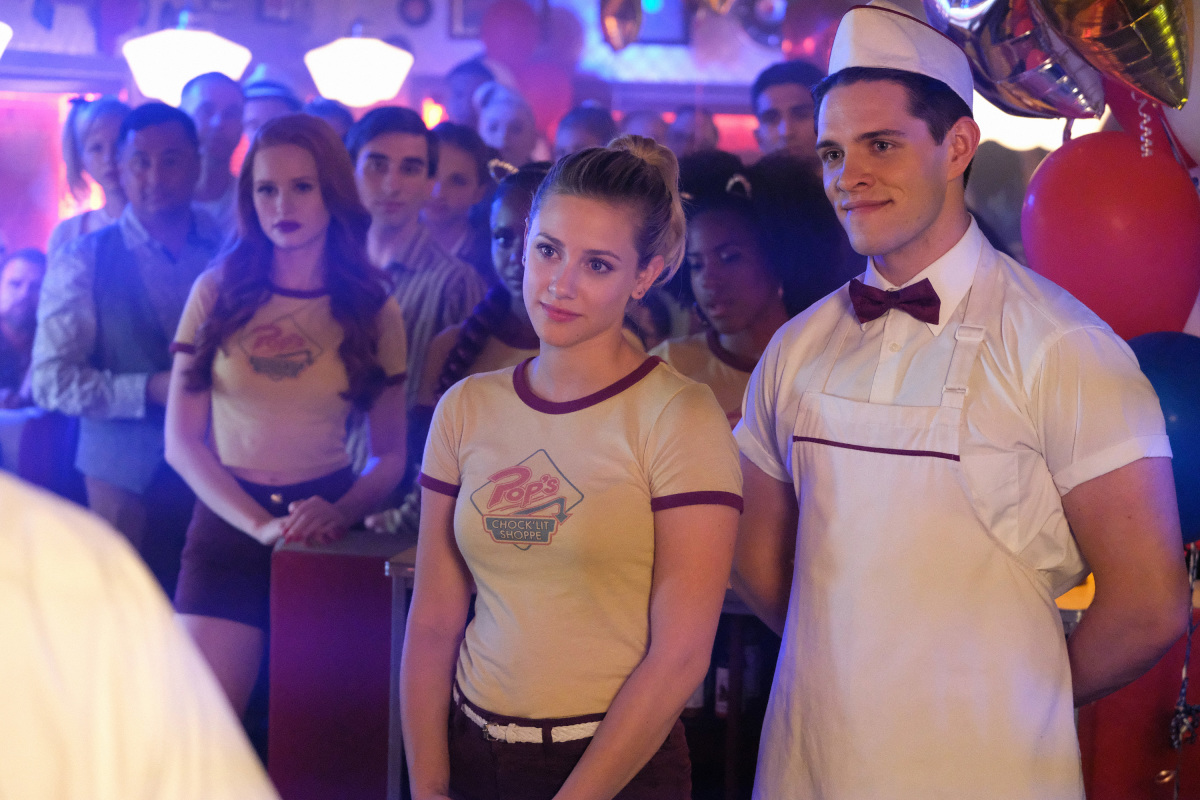 After its really great return, it was probably asking a lot for Riverdale to maintain its momentum in its second week back. “Nighthawkers” isn’t a bad episode, but it’s not one that’s particularly good either. My slowly developing suspicion is that Riverdale is a show that needs to be binged (see: its doubling in viewership after the first season hit Netflix). Not because Riverdale is particularly fast-paced (it’s not), but because no episode can really stand on its own. Viewed as a whole, things feel much more urgent and impactful but in the fits and starts of a single episode, not so much.

Some shows are really good at self-contained plots, each episode with its own focus even while advancing a larger story. Riverdale isn’t. The premiere worked because it rallied everyone around Fred’s shooting and had a single question it had to answer: will Fred Andrews live or die?

It’s a nice enough sentiment to keep the neighborhood diner running, and of course, Betty leaps headfirst into it. There’s nothing Betty Cooper likes more than a cause (which is why I’m sort of shocked she’s not more invested in discovering the killer now making his way through Riverdale), and she’s got an okay one here. Throw in FP’s potential 40-year prison sentence, and she’s pretty much hit the jackpot. It even gives Lili Reinhart a chance to tap into Betty’s darker leanings, as she casually blackmails Cheryl into speaking for FP in court. Betty’s very useful this episode, even wrangling her mom into gathering info on Grundy’s murder).

And while we’re on the subject of Grundy, let’s just get this out of the way: This storyline was gross last season, it’s gross now, and Riverdale still doesn’t get it.

Of course, we’re not going to learn who killed Grundy this week, but I expected the show to do more with the news of her death. But no one’s bothered by it except for Archie, who immediately suspects Grundy’s murder is about him. This could work, but of course, Riverdale continues to pretend Archie and Grundy’s “relationship” was a complicated and impossible union between tragic people and not AN ADULT WOMAN ABUSING A TEENAGE BOY. It’s not okay that Grundy had a sexual relationship with a teenager, and I could buy the near-universal indifference to her death as the response of people who know she was a predator and therefore don’t mourn her. But that’s not what we get.

It’s bad timing on the show’s part to skip so cavalierly over this when Hollywood is in the midst of its own reprisal, scrambling to dump predatory men after Harvey Weinstein’s decades of sexual abuse came out. This undoubtedly has a lot to do with Archie being a boy rather than a girl (I doubt the show would be able to get away with this as easily in our current climate if it was Betty, Veronica or Cheryl in the same position with a male teacher), but boys can be victims of sexual abuse. And they can be victims of sexual abuse perpetrated by women, even attractive women. How hard would it have been to allow Archie, already in crisis, at least acknowledge the complicated emotions that come with being preyed upon by someone who took advantage of his age and his attraction to her?

Too hard apparently, so let’s just move along to a less infuriating but still annoying storyline: the humdrum machinations of Hiram and Hermione Lodge. All the shady business deals in the world can’t make this boring ship float, and I can’t fathom why Hermione is so happy to condemn herself in the eyes of her daughter for the sake of the husband she cheated on all last season. I’m inclined to suck it up if only because this means better material for Camila Mendes, but after seeing how Riverdale has effectively hopped, skipped and jumped over the abusive behavior of the Coopers last year, I’m not very confident in the endgame for the Lodges’ family drama. But firing Smithers was a low blow, and I hope Veronica wreaks absolute havoc in the next episode.

It may be hard to care about Pop’s (this town isn’t short on neon lighting and greasy food so they’d be just fine), but I’m intrigued about Alice’s warning about what Betty’s good intentions ended up turning the diner into: a hotbed for crime and other unsavory elements. That could just be typical Alice, but Riverdale is certainly headed down a dark path. Really dark considering it’s become home to a serial killer, who kills Moose and Midge in the final moments.