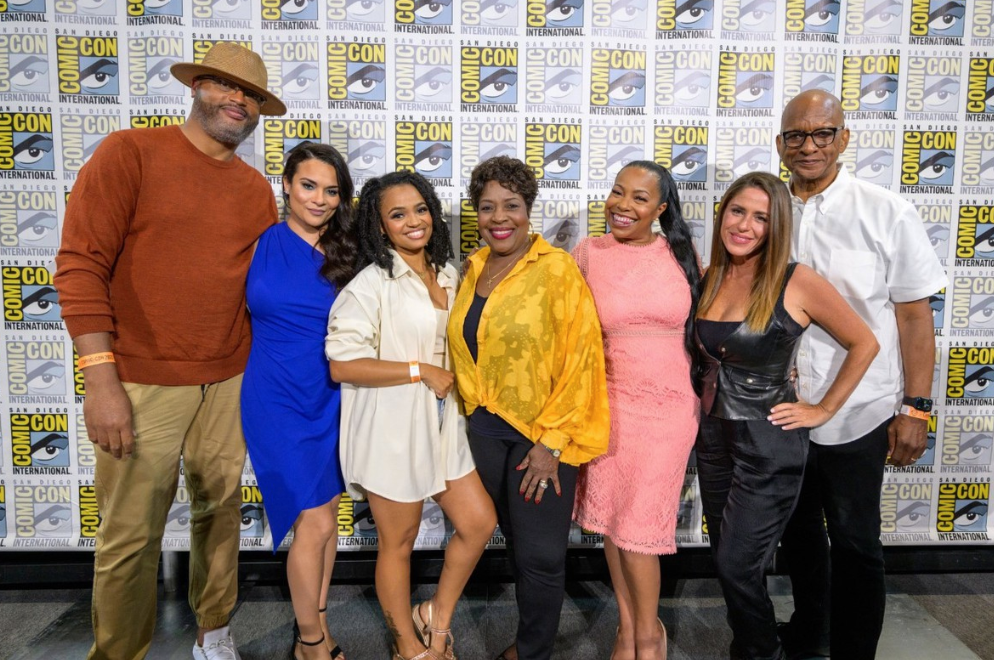 Friday was a jam-packed day for the cast and creative team of the Disney+ original series The Proud Family: Louder and Prouder, especially because they revealed an exclusive sneak preview of Season 2 during the Proud Family Panel at San Diego Comic Con.

However, for those unable to catch the Room 6A panel, the cast and creators shared a few gems that fans can expect to see in Season 2 during a SDCC interview with Black Girl Nerds.

Smith and Farquhar started things off by sharing their excitement to explore certain character arcs in Season 2 that they weren’t able to expand on within the original series and Season 1.

“I think in Season 1 [of the reboot] we spent time re-establishing ourselves and the family,” Smith said. “But with Season 2, we’re gonna get a lot more of the Proud family friends, the adults also; we’re going to get to more characters and see what their growth is.”

They were sure to point out that in Season 2, “You get a lot of Dijonay [Karen Malina White]” — which for seasoned fans means one thing: it’s going to be a lively season. Farquhar also told BGN that they’re “introducing a new character to the universe in Season 2,” but he can’t say who they’re played by. He teased, “It’s going to be a nice surprise.”

Both executive directors shared that Season 2 will also delve more into the stories of Zoe (Soleil Moon Frye) and Maya (Keke Palmer). Smith said the exploration of many characters will transpire in ways “you wouldn’t expect.”

With that said, the show won’t lose its unique charm and voice, especially when it comes to the world that audiences have come to love. Pratt spoke to how the show continues to transform into something more special.

“It feels amazing to be back and play a character that I played almost 20 years ago,” Pratt said. “When they called me about the reboot, there was no hesitation at all. I feel like we had unfinished business and it was off way too soon, and now we’re back and we’re able to do it better than ever.”

One of the key things that the cast collectively agreed on was that the reboot is aiming for “better,” especially with the level of diversity and representation they’ve been able to bring. They want fans to see that not only is the Proud family world always changing and growing, so are its characters.

“We go from tweens to teens,” Reyes said. “So, not only do we look physically different with the amazing new key art, but I feel like the storyline of LaCienega Boulevardez has her go from being so spunky to wrapping things around a little faster and trying to learn moral lessons.”

Reyes also dished that the lineup of “strong female voices,” “LGBTQ”  and other storylines and intersections will continue to be navigated in Season 2. They are seeking to make the show as real and authentic as possible, and, as many cast members echoed, sometimes it’s about having difficult conversations that are needed — especially in families.

“I love seeing Zoey grow and seeing her come into her own,” Fyre said. “It’s such an amazing opportunity for me to have this character to explore.” She also noted the significance of the show being able to tackle topics that not only resonate with its characters but also real-life viewers. It’s a visibility that many cartoons simply don’t have.

Parker and Payton also spoke to the value of representation throughout the series, especially when it comes to reflecting a multi-generational Black family that lives together.

“We don’t only have a mother and a grandmother, we have a daughter too. I feel like we have a responsibility on this generational journey that we’re going on,” Payton explained. “What I appreciate is that 20 years ago Trudy and Suga Mama got along and 20 years later, they’re still getting along. To have the relationship still be shown 20 years later — not to take it away, kill someone off, have Oscar [Tommy Davidson] and Trudy break up or whatever — to us it’s special.”

Both Payton and Parker agree that the glue that helps their characters maintain a close bond is their mutual love for Oscar and, by virtue, the entire family. Parker shared that the Comic Con Season 2 preview was the first time that she (and many other cast members) saw the footage.

During production, she didn’t see the animation, so it was exciting for her to feast her eyes on the full project’s completion. She described seeing the “bright colors and the HD, the fonts, the music” as “so exciting.” Laughing, Payton went on to say that she was sold by the footage alone and that she’d watch it if someone had just shown it to her on Disney+ for the first time.

Payton reflected on all of the hard work put into the show when explaining that it takes more than just the voice cast to put the show together, Parker echoed that idea by saying in a sing-song voice, that it takes “a village.” Both on-screen and beyond the cast and creators of The Proud Family: Louder and Prouder are indeed a village, and fans will have the opportunity to see the family continue to grow.

The Proud Family: Louder and Prouder Season 2 is coming soon to Disney+. All episodes of Season 1 are available to stream now only on Disney+.