Spike Lee’s film She’s Gotta Have It hit theaters in August 1986, paving the way for sex-positive Black women onscreen everywhere. On Thanksgiving, we were introduced to a new Nola Darling (DeWanda Wise, Shots Fired; Underground), one of this generation. With a 10 episode arc, we explore double standards in & the difficulties of dating, the phases of healing after trauma, and how media and certain industries shape body image. With Nola front and center, we get to see her expand not just as a partner, but also as an artist, friend, and daughter.

If you have not seen the film, here is a brief rundown of the characters of the new She’s Gotta Have It: Nola Darling is an artist living and thriving in Brooklyn. She is currently dating three men who challenge and inspire her in different ways. Jamie Overstreet (Lyriq Bent, Rookie Blue; The Book of Negroes) works in finance, is romantic, and has a certain level of stability that Nola does not know in her own life. While financial stability is nice, Jamie is also controlling and could use more lessons on how to be emotionally mature. Mars Blackmon (Anthony Ramos, Hamilton; Younger) is an Afro-Latinx free spirit who is truly Nola’s ride or die, and always his authentic self. While he is always there to offer a solution to any problem that Nola may encounter, he is often immature in his approach. Greer Childs (Cleo Anthony, Transparent; Extant) is a pretentious French photographer and model. He is great in bed, but is too self-absorbed to hear what Nola really needs and desires. Over the course of the story, Nola goes through a series of events and a journey of self-acceptance and love.

31 years after the original film, the series provides us with some much-needed changes to Nola Darling and many more stories to help carry us through. What remains the same is that we still encounter a clear double standard about women dating multiple people at once. The men, who are all aware that Nola is not exclusive with any of them, are often wrought with insecurities and overdoing it with their affections, in an attempt to sway Nola to their side. This is especially seen when we are re-introduced to Opal Gilstrap (Ilfenesh Hadera, Billions; Baywatch). Nola and Opal are more than just friends, and you immediately find yourself rooting for this relationship. Opal encompasses all the things Nola likes in her other three admirers and more. Opal has a daughter, a stable business, and is emotionally mature. Opal also knows Nola arguably better than all three men combined and is not afraid to call her out on her selfishness or irresponsibility.

When Greer sees Opal and Nola together, he is immediately defensive and performs an over-the-top grand gesture to show Nola that he is all in. Having not discussed if Nola wants exclusivity with just one person at all, his assumption is that she does and he must prove himself to get to the top. What’s problematic about all of these relationships is a lack of clear communication. I think a lot of this stems from a lack of being vocal about the direction (or lack there of) in which the relationships are going. Nola is still very much finding herself and part of this process is being able to fully accept herself, confront traumatic experiences, and be willing to remove the negative things that no longer serve her and impede her growth.

This brings us to healing. While the infamous rape scene is cut from this version, Nola still falls victim to assault. While walking home one night, Nola is physically assaulted by a stranger, after she declines his romantic and sexual advances. This traumatic event really is the center of Nola’s journey and forces her to examine some hard truths about herself in order to find healing and to start to flourish into the woman she wants to become. As a form of self-care from the physical assault, she creates an anonymous art campaign to help her regain her power and strength. This campaign is also attacked, bringing Nola right back to her initial state of hurt.

Before Nola confides in her lovers about the assault, she confides in her trio of close girlfriends, Clorinda (Margot Bingham, Boardwalk Empire; The Family), Shemekka (Chyna Layne, Precious; Cadillac Records), and Rachel (Elise Hudson, Some Freaks; A Crime to Remember). Each layered in their own complexities, we get to see different facets of womanhood through each of them. Much like the men in her life, each of these girlfriends hold a different place in Nola’s heart and each push her to be the best version of herself.

Clorinda suggests therapy for Nola on her road to self-recovery, but she initially resists. When a Yoruba cleansing by Mars’s sister does not calm her jumpy nerves or outbursts — rooted in her inability to move forward from this event — she finally seeks counseling. The therapy sessions are a series highlight for me,because all of the things we want Nola to work through and to say to her partners, she says here. We get to see Nola go deeper and really start to get to the root and heart of what she wants and who she wants to be.

Sprinkled throughout Nola’s narrative is her friend Shemekka’s story. Shemekka is a single mom, still not over her daughter’s father, and struggling with her physical appearance. She works for a burlesque club as a server and is convinced her body type is inhibiting her ability to be a dancer. This is one of the storylines that I was waiting to get more of in the series. Chyna Lane does a great job with the material, but we miss a lot of what could be heavier and deeper scenes for Shemekka. We see the physical pain she goes through to get to a certain level of beauty, but the emotional turmoil is not addressed as directly. The toll this transformation had on her spirit, not just her body, was something I wanted to dive deeper into.

I also would have loved to see more interactions with her daughter and the impact her bodily enhancements have on their relationship. They touch on it briefly, but I wanted more exploratory conversations of curiosity and self-love to be at the center of their mother-daughter dialogues.

When the injections fail for Shemekka at the worst of times and in the worst of ways, she ends up hospitalized. The emotional aspect is lacking a bit for me just because it wasn’t as heavily fleshed out. The impact this has on Nola is even lacking a bit. Once Shemekka is coherent, and Nola arrives after a blow-up with Greer during their date, I wanted more screen time with the two of them. It seems like once Shemekka decided to do this, she distanced herself from Nola. Nola — wrapped up in healing from the attack on her body and her work — did not seem to notice. I wanted more transparent growth for these two and really see them work through issues of wavering support during times of need. 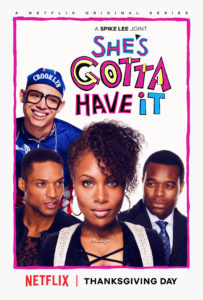 Overall, the series offers a wonderful new glimpse into the Nola Darling of 2017. The writing is strong, the shots are visually dynamic and the cast give really incredible performances, making us love and hate them, sometimes simultaneously. While not without flaws, it is a beautiful portrayal of a carefree black woman trying to figure it out. Nola is not all put together and they allow us to see her weaknesses, while being sure to show that she is multi-layered, like black women are in real life. Does Nola grow leaps and bounds from beginning to end? No. I would even argue that the same Nola we encounter in episode 1, is not dramatically different from Nola in episode 10. To me, that is what makes you want more. While Nola may not be 10 steps closer to having her life completely sorted, she is at least 2 steps. Let’s be honest, true change takes time. The way her story ends in Season 1 only allows for a rebirth and even more for season 2, which I definitely want! If one thing could be said about Nola Darling this season, its that she’s finally being completely honest and leaning deeper into her true self.

Check out She’s Gotta Have It, available to stream on Netflix now.