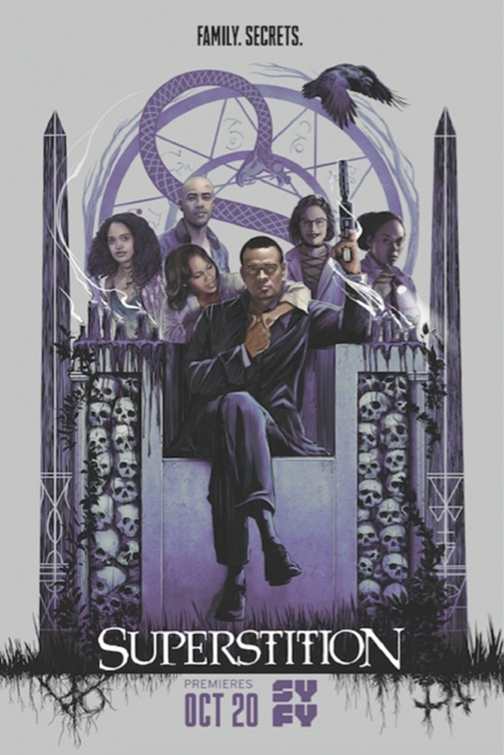 The first episode of SyFy’s new series, Superstition aired tonight. With it came only a small glimpse of the undeniably powerful family dynamic, arcane rituals and runes, and mortuary services that the Hastings offer.

Calvin Hastings (Brad Jones) returns home after his last military deployment in Afghanistan, and though his mom Bea (Robinne Lee) eagerly welcomes him back into the fold, his dad Isaac (Mario Van Peebles) isn’t quite as tempted. Calvin’s been estranged from the family business for 16 years, following the death of his younger brother Arlo (portrayed by Myles Truitt in a flashback). Calvin feels responsible, and a particularly tense moment between father and son reveals that Isaac agrees. But they’ve barely had time to dive into this history when current events pull them out of the past: Sheriff May Westbrook (Demetria McKinney) is investigating a church snake stunt that left a number of dead bodies. As the (known) funeral parlor in town and the (unknown) protectors against all things supernatural, the Hastings family goes to work. Calvin and Isaac fight off a possessed human with a forked tongue and lizard eyes, while Sheriff Westbrook finds an ancient coin. The Hastings and super awesome goth forensic scientist Tilly (Tatiana Zappardino)—whose arcana stats are third only to Isaac’s and Bea’s—deduce that the coin (one of 13) is from an ancient snake cult, and Bea performs a Nubian mystical practice to locate the other 12. The Man In Black, the infernal who seems to be the main baddie and keeper of these coins, then breaks the Hastings’ protections and curses Bea, leaving her bedridden for the rest of the episode, delicate lines of black venom running through her arms and face.

If all that isn’t enough, how about some more misfortune on LaRochelle’s Friday the 13th: Calvin finds out he has a daughter by the Sheriff. Garvey (Mario’s daughter, actress Morgana Van Peebles), who’d been in the periphery mostly ignoring Calvin, decides to talk to him about his time in the military. “Leaving a man behind is about the most weakass thing you can do,” Calvin says. A noticeably upset Garvey replies, “then welcome to your most weakass thing. Because I’m the daughter you left behind.” Well, wow!

When Calvin confronts May about Garvey, she delivers my favorite dialogue in possibly the entire episode: “It’s not all about you, soldier boy. I did that to protect Garvey. What do I look like, using my child to tether a man to my life who didn’t really want to be in it?” May is the literal best, and it’s lines like this that show how self-aware the cast and crew are.

But, at least Calvin now has a chance to make things right, unlike with Isaac…whom he forcefully decapitates while being tricked by the Man In Black’s hallucinations.

Yeah—how’s THAT for a plot twist! (AND they didn’t even get the other 12 coins, so guess who’s still out of the fight? Their OP spellcaster).

Things seem particularly grim for the first episode of Superstition, but fret not! First of all, Calvin tends to have visions; while we know they’re supernatural in nature, it’s yet to be seen whether they’re strictly linear in time and/or limited to this plane, or if they can actually see through to different planes of existence (as the Man In Black tried to imply). Either way, we’re bound to see Isaac again though flashbacks and visions.

Second off, I believe the bonds the surviving Hastings family members have with each other, and with Sheriff Westbrook, will be powerful enough to sustain them. The Sheriff has shown herself to be more than capable at dealing with both human crime and supernatural phenomena, and is one of the only townsfolk who doesn’t hate the Hastings family. She’s smart, down to mess with some supernatural shenanigans, raised a daughter by herself, and absolutely knows how to run an entire town. Sheriff Westbrook is #BlackGirlMagic, and I can’t wait to see what happens when she and Bea Hastings put their skills together!

In one exchange during tonight’s premiere, Superstition’s writers hint at things to come:

“Instead of being good stewards of this Earth, we are sucking it dry.” Isaac laments.
“I know this,” Calvin retorts. “What’s your point?”
”This imbalance is causing a rise in evil, among us and outside. It’s as if the infernals have come to put us in check,” declares Issac.

Possessed snakes seem like only the first in a long line of very pissed-off species that the infernals seek to use against humanity. The Hastings will need to draw from the power of their biological family, as well as get back in the town’s good graces to garner all the help they can get in order to save all of humanity.

While Superstition’s pilot episode pays some homage to the shows that came before—such as Supernatural and possibly earlier seasons of Criminal Minds or NCIS (think the witty Morgan/Garcia or Gibbs/Abby banter)—it seeks to improve upon them by having powerful Black women characters. Van Peebles, who directed the pilot, said the show is uninterested in relying on the typical horror/paranormal conventions, and seeks to hold episodes up to the “bullsh*t meter”.

From there, you get a show that’s shaping up as refreshingly self-aware and diverse, with three-dimensional characters instead of tired tropes.

Superstition airs Fridays at 10 pm ET/9 pm CT on the Syfy channel. While you’re waiting for next Friday, check out the show’s page on Syfy’s site and Facebook, IG, and Twitter.