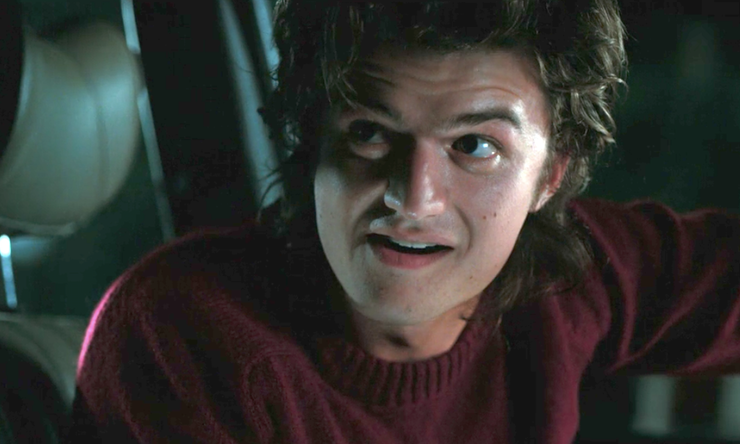 With the return of Stranger Things, Steve Harrington made an impression on the fans with his amazing character development to school bully and douche boyfriend to hero and (semi) responsible babysitter.

The numerical order is not a ranking, just a feature of the list.

Arthur Pendragon was your stereotypical spoiled prince. He treated people like Merlin as dispensable and beneath him. It’s not until Season 2 Episode 2 when he’s forced to stay with Gwen and she tells him about himself (He states he wants to be treated like everyone else yet he acts like a spoiled Prince) that you start seeing future King Arthur. Gwen is necessary to ground Arthur to the common folk and because of daddy issues, she is able to give him that self-esteem boost he lacks. By Season 4, Arthur is a different person and that’s thanks to Gwen.

Alisha Daniels was a product of her environment. She was shallow, only thinking of partying and hooking up, and it’s not until she gains her Sex Powers that she starts to straighten her priorities. As Simon said “It must be hard for beautiful girls because no one sees past their looks,” which is Alisha’s (and society’s) problem. Although Simon does help her realize she can be more than beautiful, it’s her powers that help her grow as a person. By season 3 Alisha is kind and thoughtful yet she doesn’t lose her sexual side. Being a sexual person isn’t bad, it’s realizing that sex and beauty doesn’t have to define you.

Simon was an outcast at the beginning of the show Misfits, but eventually evolves into one of the series’ most beloved characters. Sure, he started out creepy and a loner. Sure, he had some less than savory tendencies (you know what I’m talking about, the freezer…). But in the end, he becomes the man he always dreamed he could be. He’s brave and uses the powers he gained from a supernatural lightning storm to help his friends even if it means endangering himself. Which brings us to an aspect of Simon that truly flowered into something beautiful as the seasons played out; his love for Alisha. Alisha, a young woman with her own set of challenges in the beginning of the season is Simon’s soulmate. As their love for each other grew during the show, so did Simon’s character. Alisha saw the kindness in Simon and Simon saw her soul. His love for her is so beautiful, so pure, it’ll make you weep. It’ll make you forget about the awkward Simon that started the season.

Sansa Stark started as the daughter her parents raised her to be. She learned how to keep house and be a perfect wife. She dreamed of marrying a prince and thought Joffrey would be it. Her childish dreams died as she was hit with a harsh reality. She quickly found that Joffrey was a monster and she was surrounded by enemies. As she said in the finale of Game of Thrones season 7: “I’m a slow learner, it’s true. But I do learn.” Over the past 7 seasons she not only learned to survive with the many enemies surrounding her and the constant danger she found herself in, she came out on top. Sansa became one of the strongest characters on the show. She earned her place as Lady of Winterfell.

Jeff Winger started as a selfish, shallow, narcissistic man who was caught lying about his law degree necessitating him to attend community college to get a real one. In the first episode, he creates a fake study group to hit on a fellow student and bribes his alcoholic professor friend to give him answers to tests. He wasn’t a good guy. He never entirely stopped being shallow or narcissistic but he did start being more selfless. His fake study group became a real one filled with friends he truly cared about. He became a leader and learned the ability to think about the well being of others. For example, giving Shirley the priority registration he won so she could be with her kids or starting a Dungeons and Dragons group to help a troubled classmate. He’s not perfect but he has grown since season 1.

One of the most impactful images of Michonne is of her standing behind a chain-link fence waiting for entry into the prison. For me, this was a literal representation of her emotional and mental state. At this point, she had closed herself off from people, was living among the dead and close to giving up, but once Michonne met Rick and the family she changed. She opened herself up to having a new family and love, now she’s determined more than ever to live and protect those she loves at all costs.

After being severed from the Borg Collective and brought onto the Voyager, Seven of Nine had no idea who she was as an individual or even how to be one. But with the help of the crew and through her own burgeoning curiosity, Seven was able to find her humanity and identity. Seven went from being stoic and unfriendly to someone who wasn’t afraid to express emotions. She became a valued member of the crew.

Cordelia Chase was the stereotypical mean, self-centered, rich girl. Her caustic, quick wit kept the Scooby Gang on their toes and her character would have been great if her development stopped there — but it didn’t. By the time she was nearing graduation from Sunnydale High, she’d become a valuable member of the team and a true friend. Her development continued when she made the move to Los Angeles and hooked up with Angel. Cordy was not only the mastermind behind making Angel Investigations a profitable business, she became the heart of the team, a mother to Connor, and Angel’s anchor to humanity.

Sophie Devereaux started out as good-hearted, but ultimately self-centered and out for personal gain. Over time, she evolves into the heart and soul of the team as well as a much-needed anchor for Nate. She becomes the caretaker, the second in command, and the one person none of them can function without. Sophie is the sun and everyone else orbits around her.

Octavia Blake (The 100) by Crystal Sparrow

Going from Octavia Blake to Octavia kom skaikru was a huge leap. As a second child on the the Ark, Octavia was born in secret, confined to her family’s tiny living quarters and at times relegated to hiding under the floor from guards. When we meet her in the pilot, she’s itching to try every new thing that Earth has to offer, unfettered by the rules of her big brother Bellamy. When she meets Lincoln, her craving for independence and adventure are tempered with love and devotion. She begins to adopt the ways of the Grounders. Through ups and downs, fits and starts, she finds she’s not an exact fit in Grounder society and certainly not a fit with her skaikru (Sky People) compatriots. She gets tasked with a Herculean task she never asked for in the 4th season finale. We’ll see how that turns out when 100 returns in 2018.

Gabrielle was just a dreamer from the tiny town of Potidaea when she met Xena, a former warlord who had turned her back on her wicked ways. Through their adventures together, Xena confronts her past and forges a bold new future, but Gabrielle is the one who goes through a serious gauntlet of transformation. She leaves with Xena so that she can become a traveling bard, telling tales of Xena’s daring-do but that morphs into fighting shoulder to shoulder with the warrior princess. After many tribulations, she renounces fighting and becomes a pacifist for much of the 4th season. Then in one of the most memorable moments of television I’ve ever witnessed, she renounces pacifism in a stunning whirl of savagery to protect, the love of her life, Xena.

When Wesley was introduced on Buffy the Vampire Slayer, he was a screw-up, stuff and pompous, and he definitely had his pants on too tight. He was a useless Watcher, who couldn’t fight and didn’t have respect of neither his charges (I mean, it was Faith and Buffy after all) nor his peers. He’s eventually fired and we almost never see him again. But it’s his co-starring role on Angel that really turned the character around. Being around leather jacket wearing, cool and tough Angel, Wesley was able to not only model himself after the vampire, but, because Angel didn’t hover over him, Wesley also found his independence. Angel, being the chronically tortured vamp that he was, wasn’t always able to full lead Team Angel, leaving Wesley to learn to step up. Wesley learns many lessons about himself, about how to fight and be tough and stand up for himself, and how to be a real leader. It doesn’t hurt that as the season went on, Wesley lost the glasses, got a tan, and gained a hot permanent 5 o’clock shadow. By the fifth and final season of Angel, Wesley was definitely a heartthrob.

Thanks to the BGN Staff for contributing.